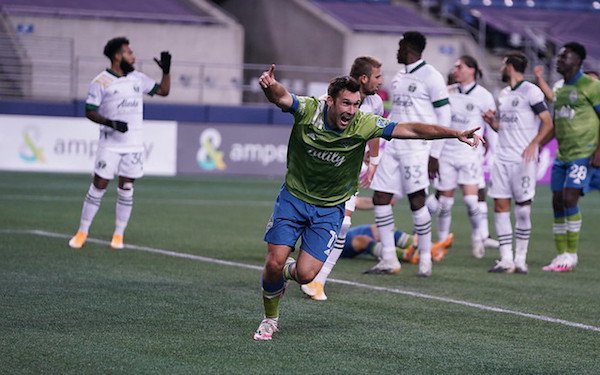 Seattle couldn't find the target until stoppage time, but Will Bruin found the net with a volley from close range on the Sounders' first shot on goal to earn them a 1-1 tie with the Portland Timbers.

The draw allowed the Sounders to retain the lead in the Western Conference, leading the Timbers on goal difference -- as well as points-per game if that criteria is used because teams end up playing an uneven number of games. (Seattle has a postponed game against Colorado for which no new date has been found.)

Bruin was starting because center forward Raul Ruidiaz has been quarantined after testing positive for COVID-19 on national team duty with Peru.

The goal was Bruin's first league goal in more than 18 months. He missed most of last season after suffering a knee injury.

Mensah gets new deal. Columbus Crew defender Jonathan Mensah, considered the top candidate for MLS Defender of the Year, received a multi-year contract extension in a deal using allocation money, beginning in 2021. The 30-year-old Ghanaian was named the Crew captain ahead of the 2020 campaign, his fourth with the team. He played in the 2010 and 2014 World Cups for the Black Stars and represented Ghana when it won the 2009 U-20 World Cup.

Zusi out for season. Sporting Kansas City defender Graham Zusi will be sidelined 4-5 months after undergoing successful surgery to repair a mid-foot sprain in his left foot. Zusi, 34, started 19 of his 20 appearances for Sporting this year. His 294 regular-season appearances since joining Sporting out of the 2009 MLS SuperDraft are tied with teammate Matt Besler for the most in club history.

Revs lose Penilla. The New England Revolution has lost Ecuadoran forward Cristian Penilla, who needed surgery to repair a left foot fracture. He suffered the injury in the Revs' 2-1 away win against New York City FC on Oct. 11 and his expected recovery time is 2-3 months. Penilla has made 80 career appearances for New England and registered 18 goals and 19 assists, including a team-high four in 2020.