To celebrate his 80th birthday on Friday, Pele, with the help of flamenco nuevo guitarists Rodrigo and Gabriela, released his new version of song “Acredito No Véio” (Listen to the Old Man), which appeared on Pele's 2006 album.

"I’ve written many books, I’ve scored many goals, I’ve fathered children, I’ve planted many trees," Pele said. "The only thing that’s lacking is a musical memento of my life.”

The video is a mix animation and real Pele playing highlights.

This mini-doc from FIFA includes brilliant Pele World Cup highlights and off-field footage, starting with 1958 tournament in Sweden, where the Brazilian, at age 17, first dazzled the world.

Pele played a major role in popularizing soccer in the USA by playing for the NASL's Cosmos in 1975-77. He scored 37 goals (regular season and playoffs), made 30 assists, and won the 1977 Soccer Bowl.


Soccer America columnist Paul Gardner served as scriptwriter and technical advisor on “Pele: the Master and his Method,” the 1973 that Amazon Prime Video bills it as "the best and most comprehensive soccer instructional video ever produced." 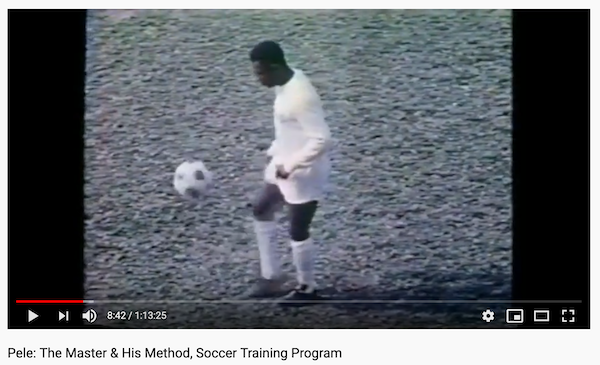