About-face: MLS Supporters' Shield will be awarded after all in 2020

The MLS team with the best record in the regular season will receive the Supporters' Shield in 2020.

The announcement comes a week after the Supporters' Shield Foundation, which oversees the award on behalf of the Independent Supporters Council, announced the Shield will not be awarded in 2020.

The Supporters' Shield Foundation board cited the "inability for supporters to be in attendance and fill their stadiums with passion" and "the current climate" that "goes against the spirit of the Shield" for its decision.

That announcement was a surprise to many members of the Independent Supporters Council, who represent fan groups around the league and say they weren't consulted or even knew about the decision until the initial announcement was made.

Toronto FC manager Greg Vanneysaid the decision was "a huge sign of disrespect" to his players, "disgraceful" and "childish and a symbol that they don't know how sports operates." Toronto FC is the current leader in the overall MLS standings, leading the Philadelphia Union by three points with four games to play. The Reds' 2.16 point-per game is on pace to be the highest in MLS history. 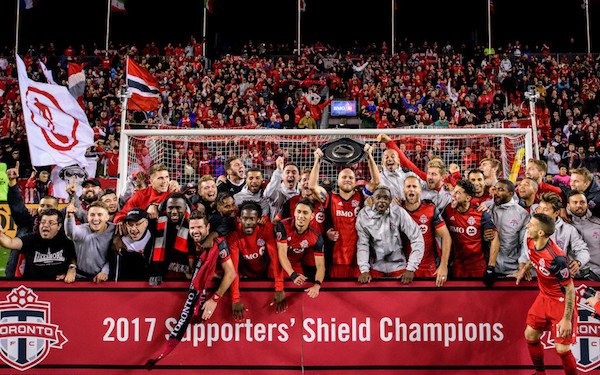 "After consulting with all of the MLS ISC representatives, we, the Supporters' Shield Foundation board, will be reversing our initial decision and awarding the Supporters' Shield for the 2020 season," the group said in a statement posted to Twitter on Friday. "You asked to be heard. In the end it was your input and the votes that showed us this is the right choice."

MLS club supporters created the shield and first awarded it in 1998. (The top finishers in the 1996 and 1997 seasons were later awarded shields.)

mls
3 comments about "About-face: MLS Supporters' Shield will be awarded after all in 2020".
Read more comments >
Next story loading