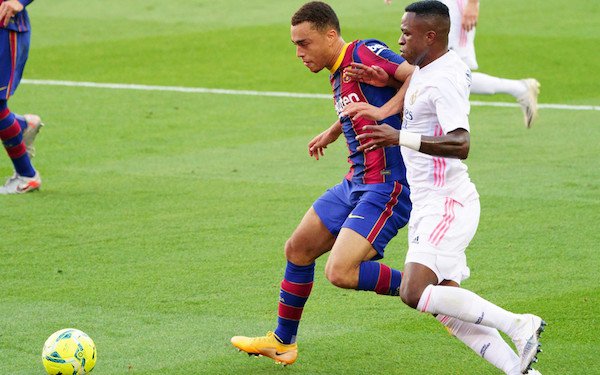 Just how much confidence Ronald Koeman has in 19-year-old Sergino Dest was evident on Saturday.

The first-year Barcelona coach threw the Dutch-American into the first El Clasico of the year, starting him even after the return of veteran Jordi Alba at left back.

And Dest did not disappoint.

Dest was moved to his more natural right-back position after starting the last two games at left back, and he was one of the rare bright spots for Barcelona in its 3-1 loss to Real Madrid.

The question mark about Dest has been his defensive work, but he shut down young Madrid's Brazilian star, Vinicius Junior. His defensive stats were impressive:

On the offensive end, Dest was steady on the ball, completing 40 of 42 passes with one clean pass succeeding in five dribbling attempts. He won over both the Barcelona and Madrid sports press with his performance.

Barcelona's Mundo Deportivo praised Dest for performing at a "very good level" in his debut at the age of 19 and managing to hold his own against Vinicius, who is a specialist at unbalancing his marker.

Madrid's Marca gave him a grade of "2" on a scale of 0-3, one of just four Barcelona players to receive that mark. (French center back Clement Lenglet and long-time midfield star Sergio Busquets earned the dreaded "-" for zero.) 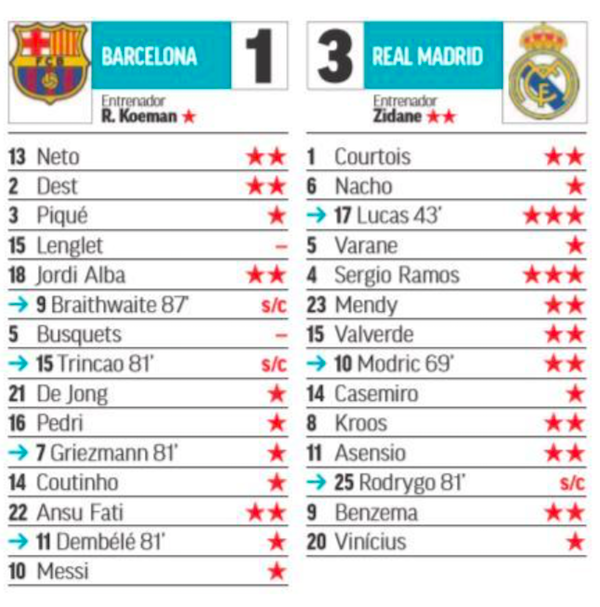 Dest was the oldest of three teenagers to start for Barcelona -- goalscorer Ansu Fati and Pedri, both only 17, were the others -- and the player Barcelona brought out for the post-game television interview, a move the Spanish media used to knock Barcelona's veterans for failing to take responsibility for the defeat.

The loss dropped Barcelona to 12th place in LaLiga standings, closer to the relegation zone than Real Madrid in first place, though it has one or two games on other teams. Games will come fast and furious for Barcelona. It heads to Turin on Wednesday for a Champions League match against Italian champion Juventus.