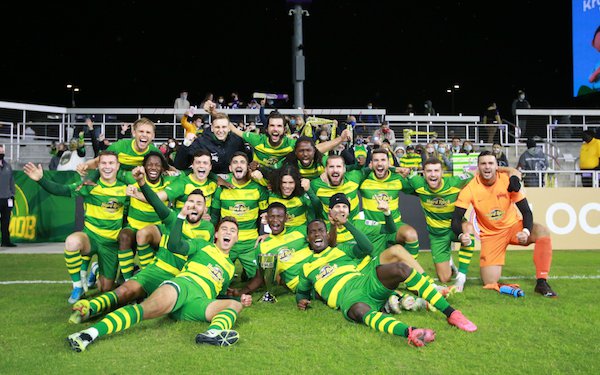 The Tampa Bay Rowdies are headed to a championship game for the first time since 2012 when they won the NASL's Soccer Bowl.

The Rowdies advanced to the USL Championship final with a 2-1 win at Louisville City in the Eastern Conference final.

Unbeaten in 13 games, Louisville City came into the game as the favorite, but the Rowdies opened up a 2-0 lead at the half and held on after conceding an own goal in the 47th minute to end Lou City's run of Eastern Conference titles at three.

Zack Steinberger scored his first goal of the season, connecting on Leo Fernandes' low cross, to put the Rowdies ahead in the third minute. Just before the first-half whistle, Sebastian Guenzatti, who won two NASL titles with the New York Cosmos, scored on a rebound to add to the Tampa Bay lead.

“I think Tampa is a really good team, so full credit to them,” said coach John Hackworth, “but we were the ones that let ourselves down today."

Tampa Bay will host the Phoenix Rising Nov. 1 in the championship game on ESPN and ESPN Deportes.


El Paso came into the game 11-for-11 on penalty kicks on the season with shootout wins in its last two games. Phoenix was 10-for-10 with a shootout win over Reno 1868, the USL Championship's best team in the regular season, in the previous round.

Something had to give in the Western Conference final, which went to a shootout after the match ended 1-1 following overtime.

Montana native Zac Lubin guessed to his right and stopped Scotsman Nick Ross, who had successfully converted penalty kicks against Tulsa FC and New Mexico United in the last two rounds, and Mexican Aaron Gomez slipped and missed badly in the fourth round to give the Rising a 4-2 shootout win over the Locomotive

The victory sends Phoenix its second Western Conferenve title in three years. For El Paso, it marked the second in a row it fell in the Western Conference final after overtime.

The Rising agreed to relinquish hosting rights to the final earlier in the week.