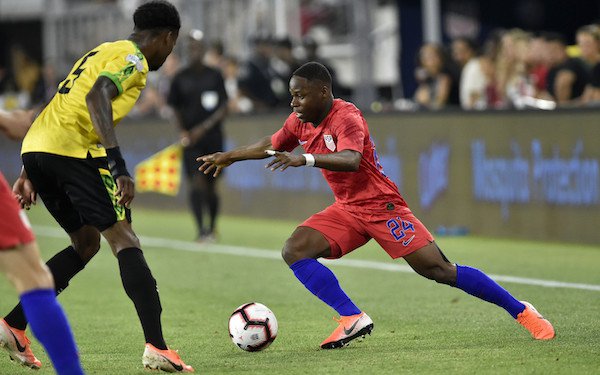 In his first league game back with FC Nordsjaelland in 13 months last Monday, the 21-year-old winger scored the winning goal off the bench, finishing off a swift counterattack with an angled shot for a 1-0 win over Randers.

But FC Nordsjaelland announced on Saturday that Amon suffered a knee injury and will have to undergo surgery. How long he will be out is unknown.

Amon was once considered one of the most exciting young American prospects in Europe. The South Carolina product even made his senior debut for the USA in 2018. He was only 19. But he missed all but two games last season with injuries that included a knee injury requiring meniscus surgery.

"This is almost unbearable," FC Nordsjaelland sporting director Jan Laursen said, "and we are all affected by it in FC Nordsjaelland. Jonathan is such a positive person with the heart of a fighter, and he has already gone through a lot without whining, but has instead stuck it out."

Amon, whose older brother Joe is a former U.S. youth international, played for the Charleston Battery's youth academy, then moved to Denmark to attend the KIES boarding school in Copenhagen when he was 15.

FC Nordsjaelland fields one of the youngest teams in Europe, relying heavily on young African players it develops and sells. Fearing another European club would discover Amon and sign him when he turned 18, FC Nordsjaelland decided to hide him, sending him to a program it had in Ghana. The move worked. Two days after turning 18, Amon signed a pro contract with Nordsjaelland. Six months later, he made his first-team debut.

Everyone at FC Nordsjaelland was rooting for Amon when he returned last Monday.

"When he made a comeback on Monday," added Laursen, "you could clearly see how much it meant to everyone in the club and how much joy it spread. Not only among the teammates, but also all the many people in the offices and in the academy who have forged strong bonds with Johnny during the many years he has been in the club. Now another big match off the field awaits him. We do not know how long it will be, but what we can say for sure is that Jonathan is not going to fight it alone. We will all do our utmost to support him every single day."