UEFA Champions League: Barcelona's 'best game all season' after one of its worst weeks ever 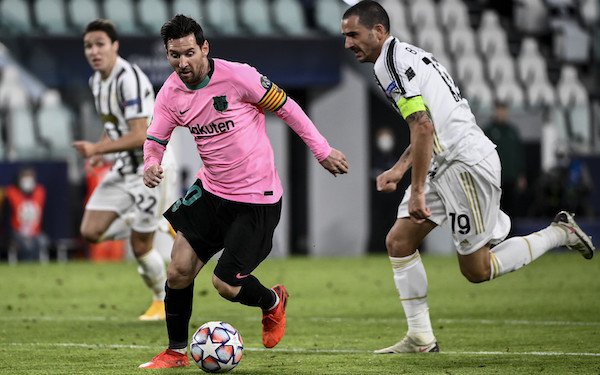 Barcelona put behind it one of its worst weeks in its history with a 2-0 win at Juventus in the UEFA Champions League.

On Saturday, Barca fell at home to Real Madrid, 3-1, in El Clasico. On Tuesday, Barca president Josep Maria Bartomeu and his board quit rather than face a vote of the club's socios on a motion of no confidence.

Barca had some luck in Turin.

Juventus star Cristiano Ronaldo tested positive for COVID-19 for the third time since his initial test on Oct. 13, ruling him out of Wednesday’s crunch game at the Allianz Stadium. New Juve coach Andrea Pirlo is still assembling the pieces of a young team. And forward Alvaro Morata had a hat trick of goals ruled offside.

Still, Barcelona was the deserving winner with goals from Ousmane Dembele and Lionel Messi.

"This was our best game all season," Barcelona coach Ronald Koeman said. "This is a big win against an important European side and we were able to play the football we're trying to impose.  I wanted us to play with three at the back, pushing one man forward to have extra in the middle of the pitch. That meant we created a lot of goal chances and, frankly, I think we should have finished the match off much earlier."

Chelsea breaks out. After a pair of 0-0 draws in its last two games, Chelsea, England's fourth representative, came alive with a 4-0 win at Krasnodar.

Three goals came in the last 15 minutes after Christian Pulisic entered the game, but Chelsea manager Frank Lampard reserved his praise for Dutch-born Moroccan international Hakim Ziyech, who started his first game of the season.

""He has worked really hard to be fit and I was very keen to get his quality into the team," Lampard said. "We saw that for the whole period he was on the pitch. He brought a lot of quality and calmness and got a well-deserved goal."

Sandwiched around Ziyech's goal was a penalty kick from Timo Werner -- after Pulisic's shot was handled in the area -- and Pulisic's first goal of the 2020-21 season.

Pulisic was on the bench while Callum Hudson-Odoi started for the first time since Oct. 3 -- and opened the scoring in the first half.

"With Callum on the left," said Lampard, "I felt he deserved a chance to play. He's trained very well recently, we have competition in those areas and we're also in the middle of a very busy patch of games so we need input from all the attacking players. We felt that today with Callum getting his goal, Hakim and Christian coming on for his goal. I was very pleased with those parts of our game."