From the 1960s on, American athletes have made their political views known. Muhammad Ali spoke out about Vietnam; Tommie Smith and John Carlos raised their fists at the Mexico City Olympics. Colin Kaepernick took a knee during the national anthem; so did the Megan Rapinoe. In response, other athletes stood.

Sports figures know they have a very public platform. They know their words will create discussion, and generate controversy.

But this year, professional athletes have gone beyond words, fists and knees. They want action. Sparked by the deaths of unarmed Black Americans, seizing time during COVID-suspended seasons and concerned about access to polling places, they have been part of a months-long social and political movement.

And soccer players have played a prominent role in it.

The movement took shape in early summer. Over 100 MLS athletes – all part of Black Players for Change – protested before the inaugural MLS is Back match in Orlando. For 8 minutes and 46 seconds – the length of time a Minneapolis police officer held George Floyd down – they drew attention to systemic racism, in sports and American society. Both MLS and the BPC are making financial commitments to organizations that fight racial inequality.

Black Players for Change and the MLS Players Association helped create MLS Unites to Vote. According to commissioner Don Garber, the league-wide goal was to “inspire MLS fans and the entire soccer community to educate themselves about the voting process, register to vote, and vote on Election Day.” 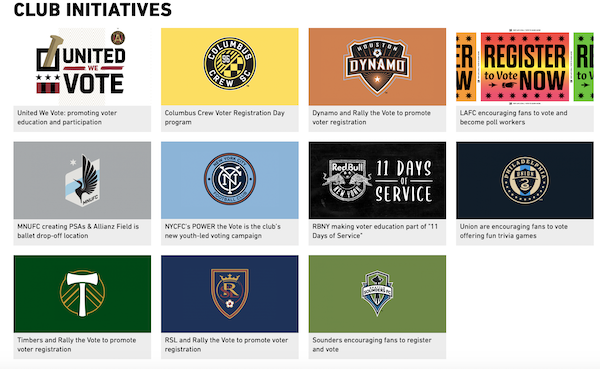 MLS’ New York headquarters will be closed Tuesday, Nov. 3, so employees can go to the polls. Front offices and training facilities of the 26 teams will follow suit.

Individual clubs are doing more. LAFC’s Banc of California Stadium was the first athletic facility in Los Angeles to serve as a polling location. The club helped recruit poll workers, and encouraged staff members to join them.

Philadelphia Union coach Jim Curtin was a particularly outspoken advocate. He consciously fostered a locker room culture that encourages players to discuss activism. He urged team officials to give players and staff Election Day off, to vote – and he and BPC helped ensure that all eligible team members are registered.

Curtin is proud of his activism. In fact, he says, “it’s more important than the game of soccer.”

In Nashville, Jalil Anibaba led the charge to get 100 percent of his 17 teammates registered. LAFC is also fully registered. The leader there was Jordan Harvey. 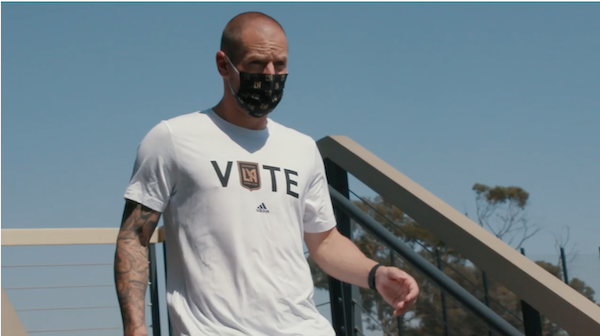 The defender is 36 years old. In 2001, he was Gatorade National High School Player of the Year. Twelve years later, the Vancouver Whitecaps named him Humanitarian of the Year.

“Me being an older guy, a leader in the locker room, I felt it important everyone from top to bottom, if they’re able to, is registered and has a voice,” he says.

“Everyone is registered. Everyone is going to vote. It’s an important time, and everyone realizes that. We have a lot of young guys on the roster. (I helped them) understand that they need to use their voice, they need to use a vote to help make a change for the better.”

Harvey understands that there are people who object to athletes’ activism; they prefer that athletes “shut up and play.” He counters, “That’s ignorant, to be blatantly honest. I think as athletes we have a platform to be able to express ourselves, not just on the field but off, and have some influence. In a day and age where we have influencers on social media that are pushing out things, I think it’s important that as athletes we push out something that’s important and honest and genuine and from the heart. So I think things like voting, things like Black Lives Matter, I think with everything that’s going on in society it’s important to create that change, and have a voice.”

mls
3 comments about "MLS players and clubs rally the vote in a variety of ways".
Read more comments >
Next story loading