A Ref's View: Adapt to the changes and stay positive

When soccer games rebooted over the summer here in New York State, the first big change was that Nick Apostolides was no longer assigning me games. Nick had given me assignments since the 1980s and I even officiated a few games with him way back when. Sadly, my old friend died of the virus back in April.

The second big change is my game assignments keep on changing, because of teams not able to secure field permits but also because some squads are not able to field enough players as registration numbers are down because of the virus. Every weekend has brought changes to my assignments, including a field change as I was driving to the game. Two games were canceled on Arbiter and I was never given a reason why although I’ve heard that a very small minority of games have been canceled because of players testing positive.

So with all these changes, adaptability and maintaining a positive attitude are essential for everybody at soccer fields and not just refs. I’m keeping a positive attitude and have told others to do the same when they start complaining about all the changes as I remember how much I missed refereeing from March to August. Seemingly every month, I had a vivid dream then about reffing, which is not occurring now as I am back on the fields, as refs in some other states wish that they were. Soccer Americans in the comments below can write where their state is in rebooting soccer.

When booking a player, I make sure to keep a social distance but still make it clear who is being sanctioned. In getting the 10 yards on ceremonial free kicks, I mark the distance but stay well away from where the wall would form. I try to avoid touching the ball as well, which is impossible during drop balls. Following these changes, I have felt safe to center ref without a mask although I’ve seen two referees wearing a mask and using an electronic whistle that they hold in their hand.

The AR’s position is more rigid, to be parallel with the second-to-last defender or the ball, whichever is closer to the goal line. Consequently, the AR is near players, including when standing at the halfway line and substitutes are ready to go into the match. Also, when the player is taking a corner kick on the AR’s side and sometimes when a player is throwing the ball in from the defensive half. I’ve been wearing a mask as AR and I’ve noticed that most assistants are wearing masks as well. Also, each AR is using his/her own flag even if the flags do not match as we are interested more in safety than anything else. 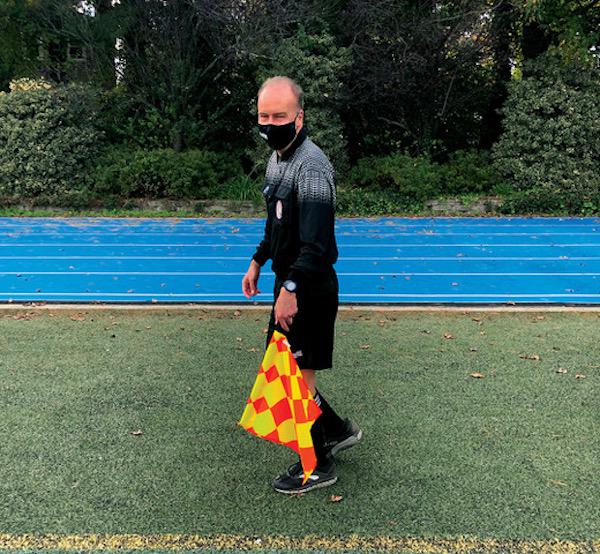 High school soccer is normally played during the fall in New York but the public schools where I live on Long Island instead opted to have a short season next spring (when hopefully there will be a vaccine). Yet the Catholic League on Long Island is playing a short schedule this fall without any problems.

Per New York high school sports rules, players wear face coverings while playing unless they “are unable to tolerate a face covering for the physical activity.” Unlike youth club soccer, where it has been difficult to get players to wear masks on the bench, the Catholic League players are complying. Only some visiting teams are using buses as there’s a concern that the virus will spread this way so parents are dropping kids off and picking them up as they are not allowed to watch matches this season.

People have said that I must enjoy not hearing the comments from fans. Except for the rivalry games that draw large crowds, I’ve not noticed much difference without any fans. Yet rivalry or not, the great majority of fans are very well-behaved in soccer, especially in this disciplined Catholic League, and I will continue to keep my positive views on this and other issues surrounding kids playing organized sports.

Local games only and no post-game handshakes in both youth soccer and high school ball, but I have started to see the teams applauding their opponents as a nice sportsmanship gesture instead.

Winter is coming so that means indoor soccer here. But with what we know about indoor transmission of the virus, will any parents sign up their kids for indoor soccer this winter? I would rather see outdoor games being played on weekends when the weather is above freezing instead as it would be so much safer.

• Refs: How is soccer rebooting in your area? Let us know in the comments section.

referees, youth
3 comments about "A Ref's View: Adapt to the changes and stay positive".
Read more comments >
Next story loading