Yunus Musah: USA is ready to see what impact the 17-year-old Valencia starlet can have 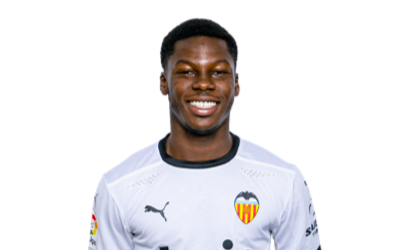 The high-profile transfers of such young Americans as Christian Pulisic to Chelsea in 2019 and Weston McKennie to Juventus and Sergino Dest in 2020 have not gone unnoticed.

Like any other move involving a player going to a big European club, these transfers brought extensive international media coverage. Amped up a notch or two by the desire of these clubs to reach the U.S. market.

Players like Pulisic, McKennie and Dest and Gio Reyna and Tyler Adams are all playing in the UEFA Champions League. And they are young. McKennie, the oldest, is only 22; Reyna, the youngest, doesn't turn 18 until next week.

They have been called in for friendly matches next week at Wales and against Panama in Austria and form the future on the U.S. national team. A national team that is assured of playing in the 2026 World Cup as co-host, so a national team that will be very much in the spotlight over the next six years.

That is not lost on young players who by birth or family ties hold U.S. citizenship making them eligible play for the USA.

One of them is Yunus Musah, who was born in New York to Ghanaian parents, spent his youth in Italy, moved to England to join Arsenal's academy and is now at 17 already starting for Valencia's first team in LaLiga.

Musah has options, like many other young Americans. Of the 24 players called in for the USA's matches against Wales and Panama, 16 are or were eligible to play for two or more countries.

Other young players like Richie Ledezma (Mexico) and Sebastian Soto (Chile) played for the USA at the young level but have been suited by other national teams to switch their allegiance.

U.S. national team coach Gregg Berhalter says the current environment around the national team and the players in the program are great selling points.

“The players that we have are attracting a lot of attention worldwide," he said in reference to those in the Champions League, "so when you speak to Yunus or Sebastian Soto or other players, these guys that are doing these things across the world in soccer are known, and they’re very familiar with these guys. Everyone can see what Christian is doing on the field, and everyone can see why this guy is a star on the world stage. ‘I can use that platform -- the platform of the United States national team, to also be a star.’"

Musah is a special case. Unlike Ledezma and Soto, who were both born and went through the U.S. soccer system at Real Salt Lake's academy, Musah had no soccer ties. But the U.S. staff was aware of Musah's connection to the USA and his progress. Berhalter said the national team was tracking Musah for 18 months and eventually make contact with the youngster and his family.

It helped that U.S. assistant coach Nico Estevez had previously worked at Valencia and had contacts that allowed him to communicate with Musah and his family, setting the stage for Berhalter to talk with them at length.

“What we see from him is a player that’s hungry," said Berhalter in a media call on Tuesday to go over roster picks for the two friendlies. "He’s hungry to make his impact/ He has a connection with the United States. He loves the direction the team is going in. He loves the young talent that he can be alongside, and we see him as having a ton of potential and for us. It’s about getting him on the field with us, letting him experience how we work as a group, how we work as a staff, letting him experience the teammates and the team environment that we’re able to create, and then all we can do is hope that in the end he chooses us for the long term. He’s obviously chosen us now, but there’s still a long-term implication that’s left to be decided.”

Playing for the USA against Wales or Panama will not tie Musah to the USA, just as Musah's appearances for England's U-17s and U-18s in youth friendlies don't tie him to England.

Musah has already started six of Valencia's seven LaLiga games this season and scored his first goal on Sunday against Getafe. He has been used as a wide midfielder, though Berhalter plans on starting him out in the middle.

“When you watch his games, he’s playing wide right in a 4-4-2, and he’s taking on the outside back, and he’s running by the outside back and he’s done a good job defensively," the U.S. coach said. "But we still see him as a player that can potentially be better centrally—a box-to-box midfielder a little bit in the style of Weston in terms of covering ground."

“What we have to remember -- and I think all of us are getting ahead of ourselves just little bit -- because he’s 17 years old,” Berhalter added. “We’re going to bring him into camp and we’re going to play him probably centrally and there’s going to be some growing pains with that, I can tell you right now. But he has so much talent that to me, it’s worth it. It’s worth looking at that. Maybe at Valencia, they’re saying, ‘Oh, he’s not ready to play centrally.' But we’re ready for it, and we’re excited to see him and the impact he can make.”

men's national team
8 comments about "Yunus Musah: USA is ready to see what impact the 17-year-old Valencia starlet can have".
Read more comments >
Next story loading