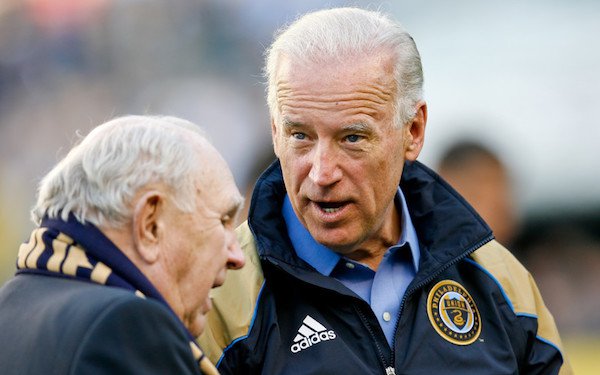 President-elect Joe Biden didn't play soccer when he was growing up in Pennsylvania and Delaware -- he played football -- but he says sons Beau and Hunter started playing when they were 5 or 6 in a county league in Delaware and he witness first hand the growth of youth soccer in the 1970s.

In his role as vice president, Biden became the USA's No. 1 soccer ambassador. He attended the Philadelphia Union's opening MLS game against D.C. United in 2010 and then attended three of the four World Cups held during the Obama administration's eight years.

The only tournament he did not attend was the 2011 Women's World Cup in Germany, where his wife, Jill, and Chelsea Clinton represented the USA at the final along with Ambassador Phil Murphy (now New Jersey governor and the owner of the NWSL's Sky Blue FC).

His soccer travels allowed him to bring along some of his grandchildren, including Maisy Biden, who graduated in 2019 from Sidwell Friends, where she was a goalkeeper on the varsity soccer team and a standout lacrosse player.

In May, Biden tweeted his support for the U.S. women's national in its equal pay fight with U.S. Soccer, telling the federation, "equal pay, now. Or else when I'm president, you can go elsewhere for World Cup funding."

2010. From South Africa, where he attened the USA's 1-1 tie with England in their opener, Biden talked about the rise of American soccer and put in a pitch to FIFA president Sepp Blatter about the USA's bid for the 2022 finals.

2014. In 2014, Biden returned to see the USA for its opening game, a 2-1 win over Ghana. Afterwards, he went into the locker room, where DaMarcus Beasley showed him the medal Biden had given him four years earlier in South Africa.

2015. Biden was in Vancouver to watch the USA's 5-2 over China in the 2015 Women's World Cup final. Seating between Joe and Jill Biden was Mia Hamm.