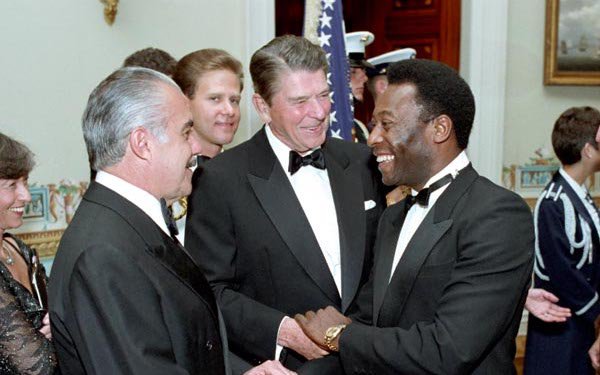 As soccer has grown over the last half century, U.S. presidents have welcomed soccer stars and courted soccer officials at the White House.

Here is a look at the history of U.S. presidents and soccer ...

2. When he invited Pele to a state dinner at the White House for Brazilian president Jose Sarney in 1986, Ronald Reagan greeted the Brazilian great by saying, "My name is Ronald Reagan, I’m the President of the United States of America. But you don’t need to introduce yourself, because everyone knows who Pele is.”

One of Pele's visits with Nixon took place in 1973, right in the middle of the Watergate investigation, and was recorded on the White House tapes that proved to be his undoing.

Thinking Brazilians speak Spanish, Nixon asks Pele if he speaks Spanish. "No," said Pele. "Portuguese." So not as to make his host look bad, Pele added, "It's all the same."

Pele was closely associated with Pepsi, which produced "Pele: The Master and His Method," the famous instructional video written by Soccer America's Paul Gardner, and Donald Kendall, the Pepsi chief executive officer, attended at the meeting.

Kendall was an old friend of Nixon's going back to the early 1960s and had been involved in the 1972 Committee to Re-Elect the President, according to Michael Beschloss.

After Pele and his wife leave the room, Nixon turned to Kendall and sat him down.

“I can assure you that the investigation is now going forward totally,” he then told Kendall. “And they’ll get to the bottom of the son of a bitch. One way or another.”

It later was revealed that Kendall, having known the trouble Lyndon Johnson was having writing his memoirs, had recommended to Nixon that he install a taping system to allow him to better organize his memoirs.

4. A White House visit by the FIFA president has become an obligatory part of any U.S. World Cup bid since its failed bid for the 1986 World Cup.

In 1987, Reagan greeted Joao Havelange a year ahead of FIFA's award of the 1994 World Cup to the USA.

In 2009, a delegation that included FIFA president Sepp Blatter, FIFA general secretary Jerome Valcke and Concacaf president and FIFA vice president Jack Warner met with Barack Obama at the White House to discuss the USA's bid for the 2018 and 2022 World Cups. The USA later withdrew its 2018 bid and lost its 2022 bid to Qatar.

In 2015, Warner was indicted by Obama's Justice Department in a wide-ranging indictment on corruption charges that included bribes related to the hosting rights to multiple World Cup bids.

Warner, who is still fighting extradition from his native Trinidad & Tobago, tried to muddy the waters, comparing his visit to see Obama to other activities U.S. authorities considered bribes.

"Was the president of the United States seeking a strong lobby from a FIFA vice president or was he 'bribing' a FIFA official with a visit and a meal to the White House? I think not," Warner said in 2015. "In each case, the answer is no, but it just goes to show how selective this 'bribe' issue can be."

5. The first president to attend a World Cup final was Bill Clinton, who witnessed the USA beat China in a shootout in the 1999 final before more than 90,000 fans at the Rose Bowl.

Less known is that Clinton also went to the 2006 World Cup final in Berlin, where Italy beat France in a shootout after French star Zinedine Zidane was red carded for head-butting Italian Marco Materazzi. Like most fans in the stands, Clinton had no idea what happened. It was only later when he took a call from his wife, Hillary, who was watching the game, did he learn what happened.

Clinton told the New Yorker's David Remnick that he sympathized with Zidane, comparing him to Chinese keeper Gao Hong, who conceded the penalty kick to Brandi Chastain that decided the 1999 shootout.

“I identify with people who get beat up,” Clinton said. “I remember that game like it was yesterday.” 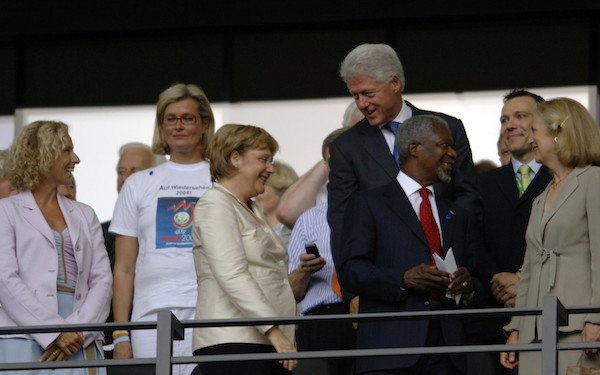 Since then, Infantino and Trump have been close friends.

They met at the 2018 G20 summit in Buenos Aires, where Infantino spoke about the power of soccer as a social and economic tool in infrastructural development, education, health, gender equality and integration.

In 2019, Infantino visited Trump at the president's golf course in Bedminster, New Jersey, and later in the year at the White House to discuss, according to Trump, "women's soccer and what everybody is going to do to make that better and more equitable."

In January, Trump invited Infantino to introduce him at the World Economic Forum in Davos, Switzerland. The FIFA president praised Trump for his contribution in making the "American dream" become "reality, not only in America, as we have seen, but all over the world.”

In September, Infantino made his third trip to the White House, having been invited to attend the signing ceremony for the diplomatic deal to improve relations between Israel, Bahrain and the United Arab Emirates.

Infantino used the trip to meet with U.S. attorney general Bill Barr, trying to portray meetings with law enforcement agencies as a regular and credible part of his job. (It came while he was under criminal investigation over just that in Switzerland -- meetings with former Swiss attorney general Michael Lauber.)