New beginning for USMNT on a dreary Thursday night in Swansea 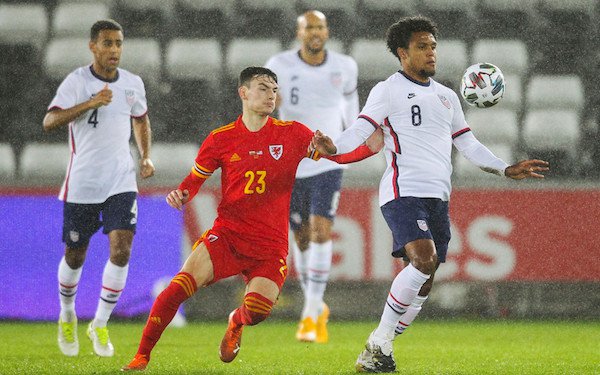 What's there to make of a 0-0 tie with few chances by either team on a dreary Thursday night at an empty Liberty Stadium in Swansea?

Normally, the Wales-USA tape would be thrown into the scrapheap of meaningless friendlies and quickly destroyed.

But if you're the U.S. national team, playing its first game in more than nine months, any match, no matter the circumstances, is an exciting thing, made more so because of the chance to introduce a slew of new young talent into the lineup.

Six U.S. players earned their first caps, including a trio of starters ages 17, 17 and 19. The average age of the six subs was under 20.

Thursday's game against Wales was similar to U.S. coach Gregg Berhalter's first game with the full team available in March 2019 when the USA beat Ecuador, 1-0.

Lots of energy, lots of possession, but few concrete chances.

The only difference was the game in Orlando produced a goal -- a fluky goal scored by Gyasi Zardes, whose shot deflected off Ecuadoran defender Robert Arboleda and looped over keeper Alexander Dominguez late in the game.

Yes, the USA dominated Wales, which must play two UEFA Nations League matches in the next week and started only two players from the team that beat Bulgaria, 1-0, in its last outing. But again, it created few chances.

The best came shortly after Uly Llanez entered the game for his second cap and pounced on a ball about 25 yards from goal, firing off a dipping shot that Wales keeper Danny Ward managed to push aside.

"Offensively, I think we need to continue to improve and threaten that backline, which we didn't do enough of today," said Berhalter. "We saw enough to be pleased and six guys made their debuts today. It was a very young team and I was really proud of their performance."

The circumstances are different from 20 months ago in Orlando. All but two players in Wales are based on Europe, so there was no jet leg. But there is the coronavirus, and all that has weighed on the players and complicated simple things like players getting to connect or reconnect.

Berhalter had just two training sessions with his players before Thursday's game. Tyler Adams, one of just four starters from the Ecuador game who is still in Wales, said the problem is that's easy for players, especially those new to the team, to assume their club roles.

What makes this team different from the team of 20 months ago is the pedigree of the players. "Now we have guys that are playing for Barcelona," Adams said, "guys playing for Juventus, myself at Leipzig, and I can continue to go down the list."

The influx of young talent in the last year alone has transformed the national team with the decision of Sergino Dest to pick the USA over the Netherlands, the emergence of Gio Reyna, who turns 18 on Friday, at Borussia Dortmund, and the willingness of 17-year-old Yunus Musah to at least consider the USA for his international future. (The Valencia midfielder remains eligible to play for England, Ghana and Italy.) Dest and Llanez are among seven players from 2019 U.S. U-20 World Cup team whom Berhalter called up.

The young players are more comfortable with the possession game that Berhalter espouses but not without complications.

“We have a lot of players who have a lot of quality," said Juventus midfielder Weston McKennie, another of the young players who has been around since the start of the Berhalter era. "We have players who feel more comfortable with the ball at their feet instead of making the run in behind that exposes the space, opens up gaps. When everyone wants to come to the ball, it makes the team even more compact, it leaves less room. It’s all fine and dandy to combine and make it look pretty, but at the same time we have to score goals."

One missing piece on Thursday was Christian Pulisic, who is returning from his latest hamstring injury.

“Personally, I think Christian could have been a big help," added McKennie, "because he’s really a one-on-one type of player that can beat a defender and get down the side and play a ball in or cross it."

The USA will only have a couple of more training sessions before Monday's game against Panama in Austria, so nothing changes for the rest of the team's time together.

After that, there are just two more windows -- March 2021 and June 2021 with the finals of Concacaf Nations League -- before the start of World Cup 2022 qualifying, originally scheduled for September 2020, then June 2021, now slated to begin in September 2021. (With the pandemic, nothing is certain.) In that regard, the USA is no different than any other national team in Concacaf in terms of the path ahead.

What is different from the U.S. national team of the last 30 years is Berhalter's likely reliance on young players. Only two players who started on Thursday have ever been through Concacaf qualifying: John Brooks and Sebastian Lletget, both part of the failed 2016-17 Hexagonal campaign.

And for all of Berhalter's efforts to implement his tactical scheme, how far the national team progresses before now and the start of the Octagonal in 10 months likely depends on factors out of his control.

Few national team players are automatic choices in the starting lineups at their European clubs, but the pandemic-ravaged European season at least provides hope that many will get opportunities for playing time.

Many big European clubs have had to trim their investment in new players and will have to give chances to young players, like their Americans, to survive their fixture congestion.