Richy Ledezma's November to remember: 'It's a dream come true' 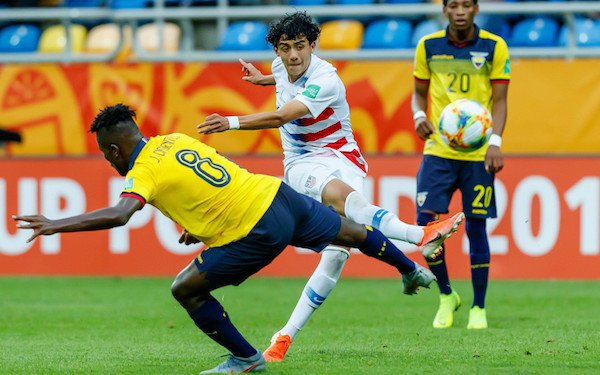 The U.S. national team that assembled in Europe for games against Wales and Panama was so young that four players were looking to make their official club debuts when they began their 2020-21 seasons.

One of them is 20-year-old Richy Ledezma, who signed with Dutch club PSV almost two years ago but only made his Eredivisie debut two weeks ago.

Four days later, he made also his European debut for PSV, depleted by a COVID-19 outbreak, in a 4-1 loss at PAOK in the Europa League.

"Honestly, it's a dream come true," he said of his pro debut and first call-up to the senior national team in a media call on Sunday. "I'm only 20 years old, making that transition from America to Europe, it's not an easy thing to do, especially living on your own for many years. Obviously, it's emotional to me and emotional to my family and we're still all trying to take it in."

"He’s such a great kid," Berhalter said. "One of the real highlights of this trip was me meeting him and working with him. Really positive attitude, nice technical player, good in between the lines. We’re going to continue to cheer him on and hope he gets some game time at PSV because he’s got a real bright future."

Ledezma signed with PSV in December 2018 but was set back by injuries. He returned for the USA's trip to the 2019 Under-20 World Cup in Poland and was mostly used off the bench. He did have an assist in his one start, setting up Sebastian Soto in the USA's 3-2 win over France in the round of 16.

Ledezma and Soto were teammates at the Real Salt Lake academy before they turned pro.

"I had to adapt to a lot of things, especially their football," Ledezma said of the move to PSV, where he played for its second team in the Dutch Eerste Divisie in 2019-20. "Their football is different from where I played at RSL. What I mean by that is the pace of the game is much faster, even in the youth, when I was with the Under-19s and the Jong, it's so much different. I had to adapt to a lot of things, quick-passing, quick thinking, and trying to get a shot off early, trying to get a quick pass early. That's helped me a lot in my game."

Ledezma came on as a sub in the 74th minute of PSV's 4-0 win over ADO Den Haag and was credited with an assist on teammate Ryan Thomas' goal 10 minutes later.

"It wasn't the best assist," he said. "It wasn't nothing amazing, but it still counts as an assist."

Ledezma is one of seven players from the 2019 U-20 World Cup team whom Berhalter called up.

Tim Weah was called up by Dave Sarachan for the first time in March 2018, Sergino Dest debuted for the USA in September 2019 and committed for the USA a month later, Uly Llanez made his debut and scored the winner in the USA's 1-0 win over Costa Rica in January, and Konrad de la Fuente, Chris Richards, Soto and Ledezma earned their first call-ups for the November friendlies.

Dest and de la Fuente started against Wales, while Weah and Llanez came off the bench.