During last year's World Cup in France, I was sitting at a sidewalk café in Reims watching England's final group game against Japan. Whenever there was a goal in the group's simultaneous Scotland-Argentina matchup, the action would switch. 1-0 Scotland, 2-0 Scotland, 3-0 Scotland! At each goal I gave a small pump of my fist and a squeak of triumph, prompting an American at the same table to ask me if I was Scottish.


"Yes," I replied. "And if we hold this win, it will be the first time ever that a Scottish side -- male or female -- has advanced to the knockout stages of a major tournament." "Wow!" he said. "Congratulations!" Hold on, I told him. Not so fast. This is Scotland, we're sure to mess this up somehow. Probably with a controversial penalty decision in the last minute. He laughed at my pessimism. After all, the game was nearly over! Then we watched as Argentina clawed its way back into contention. 74th. minute: 3-1. 79th. minute: 3-2 (an own goal ...). 94th minute: a twice-taken Argentine penalty leveled the score at 3-3. Scotland was out.

"Man, you called it!" my new friend exclaimed, clearly impressed. It was nothing to do with any special soccer insight on my part, though. It was merely a feeling of inherent dread that comes with following the Scottish national team. If the worst can happen, then it probably will. First we raise your hopes, then we splinter them like rotting wood under the heft of a cold, steel axe.

On Thursday night last week, it was the men's turn. Following abject failure in qualification group play, including a 3-0 humiliation in Kazakhstan, a good run in that mysterious UEFA invention called the Nations League had afforded the Scottish men's team a second chance to qualify for next summer's European Championship. In a semifinal playoff game at home to Israel last month, Scotland came through on penalties after a 0-0 draw. Now it traveled to Serbia, where another win would see it take a place in group play next summer with England, Croatia, and the Czech Republic.

Scotland played very well, and led 1-0 as the game entered its final phase. Serbia won a somewhat fortuitous corner in the 90th minute. "Time for the equalizer," I said to my wife, and again I was chided for my gloomy outlook. Five seconds later, a strangely unchallenged Luca Jovic (the ex-Eintracht Frankfurt player whose name I've celebrated numerous times after numerous goals in this very city) headed home for Serbia to make the score 1-1 and take us into overtime. "How did you know?" my wife wanted to know. Scotland. Just, Scotland.

I was not surprised, not even too upset. Of course, we would go home tonight having fought but failed. So very close, yet again. Brave hearts, and all that tartan-clutching nationalistic nonsense. I sat back and waited for the Serbian winner in overtime. A wonderful diving save from goalkeeper David Marshall prevented that from happening. So, we would go out on penalties instead. 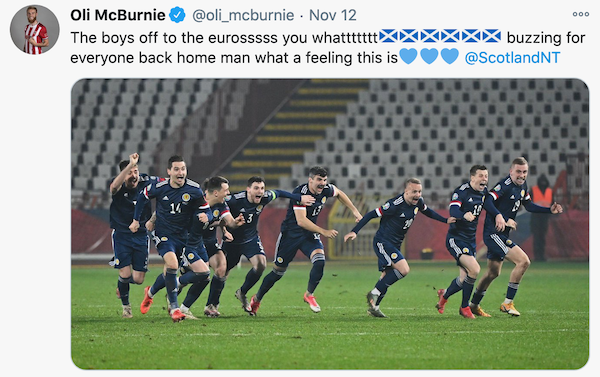 And then, the strangest thing occurred. Scotland converted all five penalty kicks, despite the soggy conditions that should have set us up for some kind of mud-induced catastrophe, a farcical slip at the wrong moment. The Serbs converted four out of four too, but then Marshall dived to his left to save Serbia's final spot kick from Aleksandar Mitrovic. The keeper immediately looked to Spanish referee Antonio Mateu Lahoz for confirmation. Was that legal? Every Scot watching was probably expecting a retake. The save, however, was fine in every respect. And a rush of unadulterated joy went through my body that felt like decades of failure and disappointment were being exorcised. I hollered, jumped, danced, and drank. Four days later, I'm still on a high, though still with half an eye on the news ticker in case UEFA order a replay because substitute Oli McBurnie's socks weren't pulled up to regulation height.

This first tournament qualification for the Scottish men's team since the 1998 World Cup was absolutely worth the wait. In that time, I've seen my daughters grow up and leave home. I remember picking them up from school one day and driving them to the mall in North Bethesda. I was following a World Cup qualifier between Scotland and Wales on the car's satellite radio.

"So, Scotland are 1-0 up," I said as we parked. "By the time we're finished shopping, Wales will be 2-1 ahead." By the time we'd finished shopping, Wales was 2-1 ahead, and that was how the game finished. "How did you know?" they asked. We just know. But maybe, we don't just know any more. Maybe at last we've broken the back of the hard-luck narrative. With two group games on home soil in Glasgow next summer, perhaps this scrappy, confident Scottish team will become the first ever to progress to the knockout round.

Hope. Here we go again. "Without Hope we wouldn't even be in the stadium," I wrote in my last book, The Quiet Fan. "Without Hope we wouldn't even be alive. Hope is a feel-good drug with a crashing come-down effect, but we're all addicted. The only cure for Hope is to kill yourself." Or to win the European Championship. Come on, Scotland, we can do this!