USWNT even more likely to rely on veterans after COVID interruption

Complaining that the U.S. women's soccer team is too old is, well, old.

The team has never been a typical national squad that constantly turns over the roster with players who have demonstrated their form in club play. The stories of Shannon Boxx, who jumped onto the national team radar with her outstanding form in the WUSA, and Becky Sauerbrunn, who leaped from prospect to core player when she anchored the Washington Freedom defense in WPS, are notable because they're exceptions to the rule.

Even with the NWSL providing unprecedented stability in U.S. pro soccer and European clubs offering a viable second option, the U.S. team roster is, to put it euphemistically, experienced.

Consider this breakdown of 2019 and 2020 appearances by birth year: 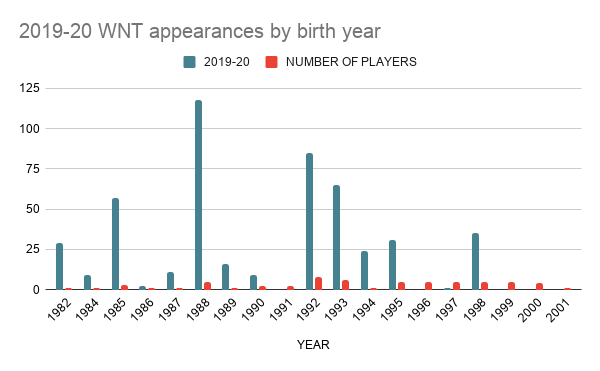 The 1982 and 1984 columns are attributed to just one player in each year -- Carli Lloyd and Ali Krieger. But all but two of the appearances by players born after 1995 are also attributed to just two players -- Mallory Pugh and Tierna Davidson.

Having a team that brings along young players slowly isn't necessarily a bad thing. Pushing a high school player like Mia Hamm or Heather O'Reilly onto the field probably wouldn't work today, given the overdue evolution of the women's game.

But the more worrying problem for the U.S. women is the pair of big multiyear dips. The first three years of the George H.W. Bush administration are represented only by Alex Morgan, who would have had a few more caps if not for her pregnancy, Casey Short and Adrianna Franch. The team has called in two 1991 players, goalkeeper Aubrey Bledsoe and the resurgent Kristie Mewis, but neither actually appeared in a game.

The next gap is the most troubling. Lindsey Horan is the only 1994 player in the recent player pool. Rose Lavelle accounts for most of the 1995 presence, with a few appearances for Andi Sullivan and Midge Purce. Then the trend line drops to zero in 1996, and Alana Cook's solitary appearance gives 1997 the faintest blip on the chart.

What's going on here? Aren't players supposed to hit their athletic peak in their mid-20s?

To be sure, Vlatko Andonovski's job right now isn't what it was supposed to be. If not for COVID, he'd either be wrapping up a Victory Tour or feeling the heat from a fan base that always blames the coach, never the players, for failing to perform in a big tournament. He'd be looking toward 2021 with an eye toward giving 20-year-olds their first chance and giving 25-year-olds a second chance. Instead, he's hoping Rapinoe and Co., can shake off the rust for one more medal run.

The problems, though, predate Andonovski, and they aren't merely a function of Jill Ellis' selections.

Consider youth national team results. The 2012 U-20 world champions featured Ertz, Dunn, Samantha Mewis and Gautrat, along with a few players on the fringe of the current WNT pool and a couple more whose careers were hindered by injuries. Since then, the USA has placed no better than fourth. The U-17s are far worse, failing to advance past the group stage since 2008 and twice failing to qualify out of Concacaf.

Whether the USA's age will hurt them in the Olympics, where the rest time and rosters are limited, is hard to say. The U.S. women have a history of finishing strong in each cycle. But 2016 showed the dangers of giving precious roster spots to veterans who aren't in peak condition. We'll also have to see whether Andonovski is able to make tough decisions like limiting playing time for Rapinoe and Lloyd to the sure consternation of the media and social media.

The bigger issues will come later, when Sauerbrunn is no longer there to anchor the defense and the attack may not be able to rely on Morgan, Tobin Heath and Christen Press, let alone Rapinoe and Lloyd.

The only action U.S. Soccer and the WNT can take now will be to work together to ensure that, even as lawsuits and COVID drain the federation's reserves, the next generation has a fighting chance at keeping the team on top of the world.

women's national team
1 comment about "USWNT even more likely to rely on veterans after COVID interruption".
Next story loading