Gyasi Zardes on thriving in Columbus: The Berhalter boost, Caleb Porter's guidance, and a happy family

Gyasi Zardes  has grown into one of Major League Soccer's most consistently potent strikers since leaving his hometown LA Galaxy for the Columbus Crew, evolving into a savvier box presence, expert finisher and critical component of what might be the club's most talented side since the MLS Cup campaign 12 years ago. 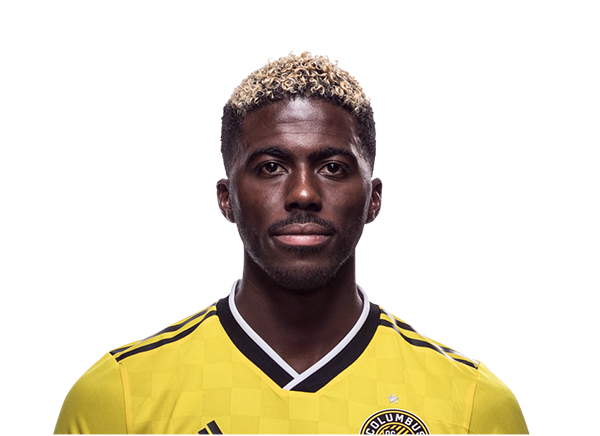 It's about a number of things, largely his comfortable fit into a system of play that best utilizes and accentuates his attributes up top, the position he's always known he's meant to play. Others weren't so sure, but Gregg Berhalter, who brought Zardes to Ohio, and Caleb Porter, who has this Crew team among the real title candidates heading into this weekend's playoff openers, never harbored doubt.

It's paid off nicely -- he's netted 44 goals in three seasons in Columbus, the most over that span in MLS among players not named Josef Martinez, Carlos Vela or Zlatan Ibrahminovic -- and reached its apex over the summer as Zardes feasted on an attack governed by newcomer Lucas Zelarayan and the Crew climbed atop the standings.

Injuries down the stretch took Columbus out of the Supporters' Shield race -- there was just one win in seven outings from late September through late October -- but a healthier group beat Shield winner Philadelphia Union and Atlanta United in its final two home games to finish third in the East.

There's tremendous confidence as the Crew (12-6-5) heads into its first-round meeting Saturday afternoon with New York City FC (12-8-3) at MAPFRE Stadium, and Zardes -- who won an MLS Cup championship ring with the Galaxy in 2014, his breakout season -- says he's “extremely hungry.”

“This is the year to do it. The team we have, you know, this is the year ...,” he told Soccer America. “It's what we've done throughout the season, how we overcame adversity, how we started off strong, went 3-0 [in group play, before falling on penalties in the quarterfinals in] a tough environment at the MLS is Back Tournament. And just having all our healthy players. I feel like we're starting to get our chemistry again.”

Zardes missed a couple games after a knock in training -- late October trips to play Houston Dynamo and D.C. United -- and the Crew's attack suffered without midfield linchpins Zelarayan, who was limited to 12 starts, and Darlington Nagbe. Both are ready to go.

Zardes and Zelarayan quickly built a connection, and the striker netted a dozen goals, just two off off Golden Boot winner Diego Rossi's total with Los Angeles FC. His goals-per-90 rate -- 0.63 -- was the best of his career as the Crew scored nearly as many (36) as last year's group managed (39) in 34 outings while accruing more wins (12-10) and points (41-38).

Zardes has been at his best, taking another step forward in his evolution as Porter has sought to give his striker the freedom to do more than just poach, to take advantage of the full skill set. The idea is to “bridge” the qualities he contributed to the Galaxy -- the pace to stretch defenses and combine from wide spots -- and his ability to finish in the Crew's system. 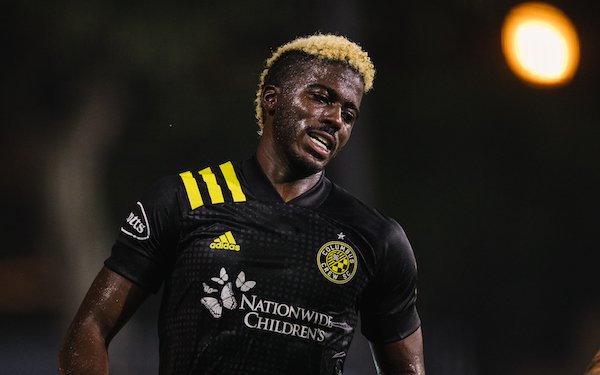 “I think he's proven to be a complete striker who can do everything,” Porter said. “He can stretch and hold the ball, play back to goal, be lethal in the box, be in the right spots, and create for himself at times, too, because that's important. As a No. 9, you need all those things, and I think he's definitely had a great year.”

Zardes is having a blast.

“You know, I'm thankful things have worked out the way they did, because I felt like me leaving L.A. and stepping out of my comfort zone really helped me grow as a person and a player.”

Zardes, 29, has blossomed since leaving the comforts of home in a January 2018 trade that took him away from Southern California for the first time, really.

Ohio is decidedly not Southern California. That's not a negative. Zardes and his wife, Madison, and their four children enjoy the slower pace in Columbus. “My family,” he says, “loves it here.”

“The biggest [difference] was the weather,” he said. “Man, I was so spoiled in California with the sunshine, I want to say, 85 percent of the year. The lifestyle here in a way is similar to L.A. -- a lot of people from L.A. actually live here, at least in the neighborhood I live in -- but it's less traffic. You don't sit in traffic for an hour.”

What's tough is the distance to loved ones back home and the support -- babysitting no small part of that -- they provide.

“I was a bit emotional [leaving the Galaxy], as far as just leaving your hometown,” Zardes said. “I used to always say it's not my career, it's our career, because my friends and family were watching me play club, academy with the Galaxy, even in college, with [Bakersfield], like, an hour and 45 minutes away. That was the most emotional part, not being able to play in front of them on a weekly basis.

“But with technology, they can keep up with me [by] streaming games online, and they fully support me here in Columbus. And my dad, from the get-go, thought it was a new opportunity for me to succeed with a new organization. Sometimes you need change to grow.”

He was a hit from the start, netting three goals in his first two games -- two in his home debut, a 3-2 win over Montreal -- en route to 19, the fourth-best total in the league as the Crew advanced to the postseason. He netted 13 in year two, when Columbus slumped to 10th in the Eastern Conference, and this year's dozen computes to 20 or 21 over a full 34 games.

We'd seen flashes of this when Zardes was with the Galaxy. Bruce Arena used him on the flanks more often than up top, where Robbie Keane was best-in-MLS great, but he scored 16 in 2014 -- plus another in the MLS Cup triumph over New England and two more in the U.S. Open Cup -- when stationed in front.

“That's my strongest position, as you can see,” noted Zardes, who has made that abundantly clear with the Crew. He's a student of the game, possesses a revered work ethic, and he lapped up the lessons while with LA. Playing alongside Keane and Landon Donovan was a master class in attacking soccer, and there were no shortage of mentors, such as Steven Gerrard, Giovani Dos Santos and Ashley Cole.

Zardes' numbers faded after that, largely about positioning, two injury-scarred seasons, and the club's worst-in-MLS 2017 campaign. The trade for Ola Kamara seemed a smart move, certainly in the near-term, and the Norwegian forward netted 14 goals that year for LA after scoring 34 the previous two with the Crew.

“He was the first guy I called,” Zardes said, “and he said, 'G, you're going to love it here. You're going to play up top, you're going to score multiple goals, you're going to multiple opportunities playing in this system.' And sure enough, as soon as I put on the Columbus Crew jersey, I was just scoring left and right in preseason and carried over to the regular season.”

It wasn't quite as easy as that. The system was a wonderful fit, but Zardes needed to become savvier, sharper. Gregg Berhalter, the Crew's head coach when he arrived, worked closely with him.

Berhalter “challenged” his players, and Zardes evolved under his tutelage.

“You learn so much ...,” said Zardes, who has been a regular presence with the U.S. national team since Berhalter took charge two years ago. “We'll play a certain system, or a certain style, and we'll have multiple exercises that benefit [that] style. Playing for him that first year in Columbus helped me grow tremendously as a soccer player, not just a forward. Just understanding the game and ways I could become a better striker and become just a better overall player.”

Berhalter exited the Crew for the national team after the 2018 season, and Porter stepped in. He worked with Zardes on becoming more versatile.

“Last year, you could see teams had figured out he's just going to be a guy who stays on the backline and wants to get on the end of crosses and score from 6 yards out,” Porter said. “That's how it was programmed, and it was working to a point, but we felt we needed to change a few things to get him freed up a little bit more ... and we needed him to provoke the opponent behind the line to open space.

“I think this year he's kind of getting more accustomed to what we're looking for and how he can threaten the back four in different ways.”

Porter says he's most pleased that Zardes' repertoire of finishes has broadened.

“He's shown he can score goals in different ways, and not just predictable ways,” Porter said. “[He's scoring] off crosses -- which he's known for -- through runs behind, in transition, with his head, with his feet, off the dribble.” 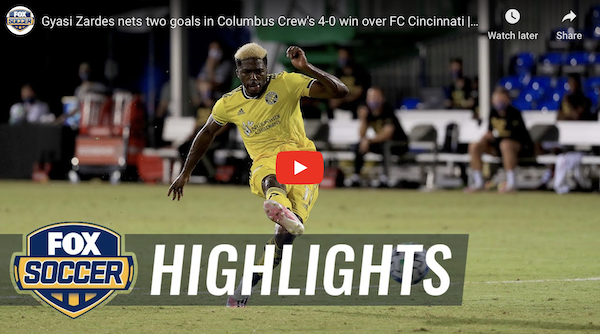 Zardes' ability to pull in those around him -- Zelarayan, winger Pedro Santos, Nagbe and Artur in central midfield among them -- has been vital to the Crew's success.

“He has more to offer than just that last piece, that last final play,” Porter said. ”Of course, I want my No. 9 to be able to finish the play and be that finishing piece in the way we break teams down to goal, but I also want him to be free to check, to hold the ball, bring midfielders into the game, at times run in the channels when it's on. A little more freedom in our system to be a more complete No. 9.”

Zardes sees his growth, but he's not satisfied.

“If I'm honest, I'm not,” Zardes said. “Because I always want more. I always, always want more. And some of the games out there, I felt like I could have scored more goals. But that's me, that's myself, that's how I'm hard on myself, and that's how I keep getting better. I try never to be satisfied with my results.

“I am thankful I'm playing. I'm healthy. But at the same time, I think there's more goals out there for me. I just have to keep watching video, working on ways I can help my team score.”