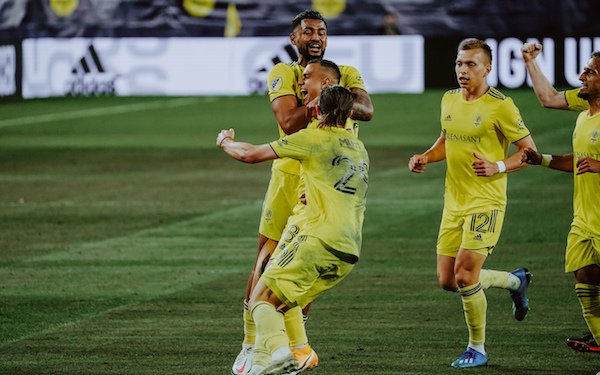 Both MLS expansion teams advanced to the playoffs in their first seasons, but before Friday's Nashville SC-Inter Miami game, Nashville SC coach Gary Smith wanted to make sure everyone realized that the circumstances weren't the same.

By contrast, Nashville SC, which moved to Eastern Conference for remainder of 2020 season to give it 14 teams, finished in seventh place, which would have been good enough to make the playoffs in 2019.

Any doubts about which was the better team this season were put to rest in Friday's play-in game.

Nashville SC was dominant, jumping ahead with two goals in the first 24 minutes, and won 3-0.

Yes, Inter Miami will be without striker Gonzalo Higuain, reported to be MLS's highest-paid player, his older brother, Federico, and center back Leandro Gonzalez Pirez, whose mid-season arrival coincided with the club's turnaround. All did not travel to Nashville after testing positive for COVID-19.

Nashville SC had its own COVID-19. issues earlier in the season, withdrawing from the MLS is Back Tournament, but it improved as the season went along, finishing with an 8-5-8 record after it resumed play in August.

"Well, an absolutely fabulous night for everyone," said Smith after Friday's win, "I’m not sure it could have gone more to script."

That included big games from the three Nashville DPs up front -- Randall Leal and Hany Mukhtar, who both scored, and Jhonder Cadiz,who started for the first time this season.

Captain Dax McCarty finished things off a shot from 20 yards after an unchallenged run of almost 40 yards.

"It was a little bit of a surprise obviously when the ball went in the net," he said, "but when I picked up the ball in midfield I know I had a little bit of space. I could hear Walker’s [Zimmerman] loud voice behind me yelling, 'Go, go, go.' So, I took his advice and I just started dribbling."

The win moved Nashville SC into the Eastern Conference's round one against defending conference champion Toronto FC.