MLS Playoffs: The most insane game ever 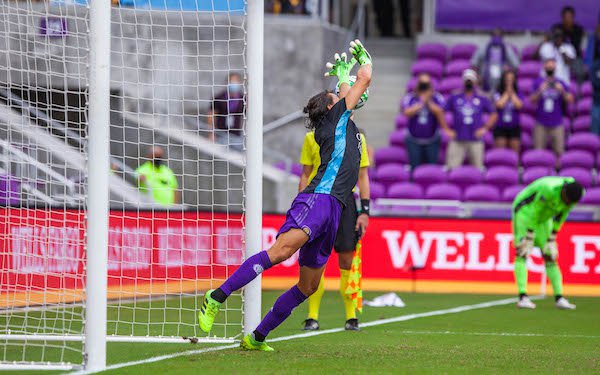 It took Orlando City six seasons to make the playoffs, so it was only appropriate that it seemed like forever for the Lions to capture their opening game.

When Benji Michel stepped up in the seventh round of the shootout to win the game for Orlando City over New York City FC, it had long since been forgotten the game needed 11 minutes of second-half stoppage time, ending when Tesho Akindele missed a sitter for Orlando City.

Eleven minutes had to be added in part because Orlando City defender Ruan was red carded in the 87th minute for kicking NYCFC's Gary Mackay-Steven in the crotch, then feigning that he had been hurt when the Scotsman used Ruan's stomach to push himself up.

Then there were two 15-minute periods of overtime that included a yellow card to Orlando City keeper Pedro Gallese for time-wasting.

The shootout itself took more than 22 minutes.

Orlando City was leading 4-3 in the fifth round and seemed to have won the game when Gallese stopped Taty Castellanos' spot kick.

Oscar Pareja thought so. The Orlando City coach rushed into the tunnel to find Ruan.

"I don’t think he was even looking at the game," Pareja said, "so when Pedro stopped that, I didn’t think about anything else but him, and I came to tell him that we won. Then somebody came, almost as fast as me, or faster, and told me that I needed to come back."

Pareja needed to come back because Gallese's save had been reviewed by VAR, which showed he did not have had a foot on the line when Castellanos' penalty was taken.

Castellanos' penalty kick would have to be retaken, and to make matters worse, Pareja would have to find a new goalkeeper. Chapman issued Gallese a yellow card, his second of the game, and sent him off.

The new IFAB rules in effect for the 2020-21 season call for only a warning to goalkeepers on the first infraction in a shootout. Not only are they only issued yellow cards for subsequent offenses but any yellow cards received in regulation or overtime don't carry over to the shootout.

That didn't do Gallese any good since MLS began and finished the season with the 2019-20 IFAB rules in effect. They call for an automatic yellow card for infringing on a penalty kick.

Orlando City tried to put backup keeper Brian Rowe in the game to face Castellanos, but only players already in the game are allowed to replace the goalkeeper in a shootout.

Argentine defender Rodrigo Schlegel, whose only experiences as a goalkeeper were as an emergency backup on his youth team and in pickup games with family and friends, was placed in the Orlando City goal.

Things didn't look good for Orlando City when Castellanos converted his second attempt, and Portuguese star Nani missed with a chance to win the game. Nicolas Acevedo and Robin Jansson scored to make it 5-5 after six rounds.

But in the seventh round, NYCFC's Gudmundur Thorarinsson fired his attempt to within arms length of Schlegel, to his left. The Argentine put both hands in the air as if to protect himself and parried the shot off the post and out of play.

Schlegel's thinking? "The first [penalty kick] I stayed in the middle of the goal. The second I decided to go to the right side, so the left side was the only one missing. I decided to go there. Thank God the ball came to me and I was able to make the save."

Given what had happened to Gallese, Schlegel looked around for 30 seconds to see whether VAR wold again intervene, then ran off to celebrate with his Orlando City teammates, who mobbed him, believing they had won the game -- so did the announcers on the UniMas English-language feed.

“The truth is," Schlegel said of initial thoughts after the save, "that I couldn’t think about anything because I thought that the game was over."

It took more than 11 minutes between the time Gallese was red carded and Schlegel stepped in the goal. Pareja said he knew the rules prevented Rowe from entering the game.

"Rodri came and said, ‘Papi, I can do it.’" Pareja explained. "[Andres] Perea came and said, ‘No, I want to do it. I will stop that one.’ Then, Brian came and Pedro came and Pedro said, ‘Give it to Rodri.’" Rodri told him, ‘I was a goalkeeper when I was in the academy,’ so we just gave him the gloves and prayed. He did an outstanding job on showing the personality. After what just happened, I can laugh, but believe me that this is insane tonight.”

mls
2 comments about "MLS Playoffs: The most insane game ever".
Read more comments >
Next story loading