Making the case for a shootout revival

When I lived in the USA, I used to love being asked to explain cricket. My favorite moment was seeing the expression on an American's face when I said, "Some games last five days, and at the end there's still no result." I might elaborate and add, "So, imagine a baseball game going on until 6 a.m. and the 47th innings, and then everyone just gives up and goes home."

I grew up with five-day cricket games that often ended with neither team winning, so it never seemed strange to me. The more I think about it, though, the more absurd it seems. It's not like we're talking about war, when two sides reach a compromise because neither can emerge victorious. This is mere sport. The whole idea is to have a winner and a loser and then to move on and look forward to next week.

I bring this up now for two reasons. First, MLS has entered its playoff phase and, for those of us looking from afar, it's really only now that the U.S. domestic soccer season starts to become interesting. Part of that interest is the knockout nature of the competition. Second, I've noticed an anomalous number of 1-1 ties in the Bundesliga this season -- a total of 19 from the first eight match days (72 games). For the sake of comparison, the previous two Bundesliga seasons' first eight match days yielded the same number of 1-1 ties combined.

Ties are tolerated for a number of reasons. A 0-0 game can always yield its own narrative -- perhaps the game's such a stinker that you can complain all week about the time and money you wasted. A 2-2 tie or higher can often be an enthralling game of comebacks or see-saw action. But 1-1 is just the beige jacket of soccer results. It's like a grey, windless Sunday afternoon.

It's like leaving drinks for the colleague whose name you never really knew. I'd rather any outcome in a soccer game than a 1-1 tie. Theoretically, I'd rather see my own side lose than tie 1-1.

The low scoreless draw is unsatisfactory to me, borderline offensive. When a game reaches 1-1, it has the potential to grow. Both sides have proven they can score. There's a base here to turn this into a classic. And then, nothing. We head home with the feeling that an opportunity was missed. That something remains unfinished. That the two teams, and indeed the sport of soccer as a whole, let us down because they couldn't be bothered to entertain.

When MLS began in 1996, one of the few innovations it carried over from the North American Soccer League was the tiebreaking 35-yard shootout. Fans were apparently unhappy about that. If the league wanted to be authentic, it was said, we needed to have the tie, with spoils shared, like all of the world's much older leagues. The tie has history -- soccer's past is littered with hundreds of thousands of 1-1 ties. No one will take us seriously if both teams can't go home with a hard-earned point from an utterly forgettable game. The shootouts were quickly axed.

I used to be of the same opinion. That shootouts were gimmickry, messing with soccer's time-trusted mechanics. Now I'm inclined to think, 'You didn't do enough to win, so you don't deserve a point. Let's have a decider.' For those teams that have failed to entertain the paying fan, now's their chance to come good. Let's face it, penalty shootouts get the pulse racing, even with the odds stacked heavily in favor of the outfield player. In a 35-yard shootout, where the attacker takes on the advancing goalkeeper, the contest is much more even, and so much more exciting. 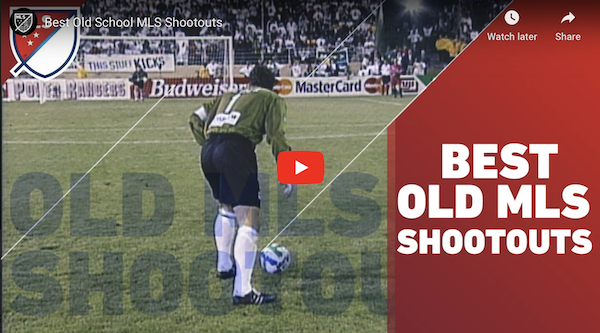 It's odd that, given all the changes the game has made to sell itself to an ever wider audience, no one has pressed FIFA and other soccer administrators for an end to the tied game. Even though tiebreakers in the form of penalty shootouts decide the winner in many games at soccer's flagship tournament, the World Cup. If the tie is so sacred, why are there not replays at the most-watched sporting event on the planet? Logistically almost impossible, of course, but there's another reason -- no one wants them, we all want to see a victor on the day.

There would be strong resistance to tiebreakers from those coaches whose deadly tactics are geared toward securing nothing more than a point. So, let them keep their precious point. Shootout winners would get an extra point on top of the point earned over 90 minutes. Three (or even four?) points would remain for teams winning the game in the conventional manner. The only loser would be the dubious tradition of stalemate.

Cricket still has its 5-day international 'test matches,' and for connoisseurs like me they are wonderful events to follow, even without a clear result. In recent years, though, cricket has veered toward much shorter matchups that finish in a single day, or even over the course of an evening.

I viewed such hastily decided contests as a commercialized abomination until the night I caught the Indian Premier League on TV. It was pacey and dynamic, with a thrilling climax, and I was hooked. Best of all were the soldout stadiums and the raucous fans, loving every last second. In the end, those fans must be every sport's priority.

mls
13 comments about "Making the case for a shootout revival".
Read more comments >
Next story loading