John Harkes on a Year of Fear, Anxiety and Triumph -- and American soccer's great strides

A few months ago I reached out to John Harkes about the 30th anniversary of the USA's appearance at 1990 World Cup. Upon returning the call, Harkes apologized for not getting back sooner. "Our trainer was attacked by fire ants and we had to call an ambulance," he said. "It's been a crazy year." 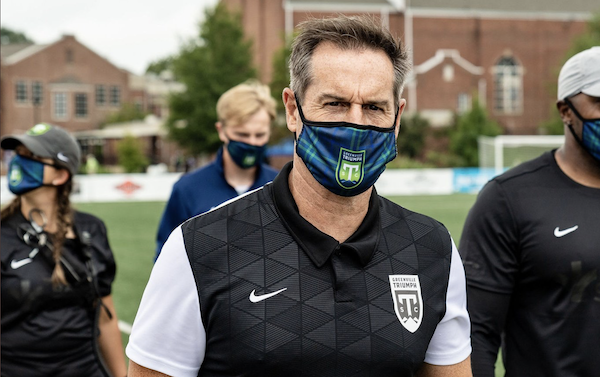 Five weeks into preseason training of Harkes' second year as head coach of USL League One's Greenville Triumph, the league shut down because of the pandemic. On the same day in March, Harkes' father-in-law Ron Kunihiro was admitted to the hospital and diagnosed with COVID-19. The 78-year-old was one of the first COVID patients at Manassas, Virginia's Prince William Medical Center, where he spent 42 days, 31 of which were on a ventilator.

"He's doing really well now," said Harkes, whose team returned to practice, with restrictions, in May, and played its first game of the season on July 18, a 2-0 win at Fort Lauderdale.

"We had to go to where COVID's spike was the biggest in the world at that time," Harkes said. "So we were a little bit in fear. ... You're dealing with a lot of different situations and emotions. You're not just a coach during a season like this. You're psychologist, a friend, and you're becoming kind of a medical health consultant because you have to know all the protocols. It certainly was a challenge and a lot to manage, but it was definitely worth it."

In 2019, the Greenville Triumph's inaugural season, Harkes guided it to USL League One final, where Greenville fell, 1-0, to North Texas SC. This year's season-opening win in Fort Lauderdale marked the start of a six-game undefeated streak, the Triumph remained in first place of the 11-team league throughout the season, and with an 11-3-2 (W-L-T) record claimed the regular season title. Positive COVID tests by Union Omaha players forced the league to cancel the final, and Greenville was named 2020 champion by virtue of a superior points-per-game average (2.187 compared to Omaha's 1.825).

And Harkes was named USL League One Coach of the Year.

"This was a year of adaptability," he said. "We groomed the right players. We gave them confidence. We kept the balance. Mental health was a huge focus. We had a lot of meetings with my staff, making sure that we're always connecting with each of the players on different days, whether that be FaceTime or sitting down with them for coffee, or something away from the game, just talking to them about what they're going through.

"It gave them a lot of self-belief and confidence and it put them in a trusting environment where they knew we had their backs. That led to us being No. 1 all season, which is an incredible accomplishment. The players deserve a lot of credit for their discipline on a week-to-week basis." 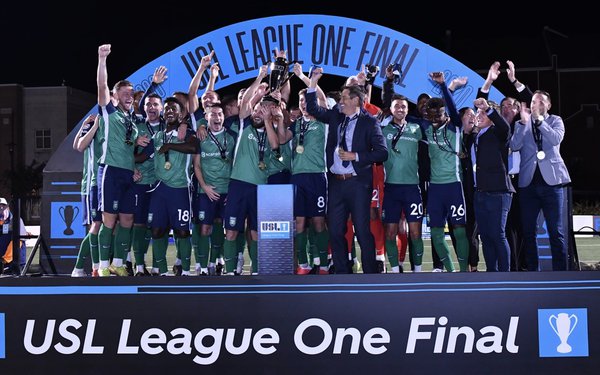 During his Hall of Fame playing career, Harkes helped the U.S. national team climb onto the world stage by reaching the 1990 World Cup and the second round of the 1994 World Cup. His success in England blazed the trail for American players to Europe. After signing with Sheffield Wednesday after the 1990 World Cup, he helped it win the League Cup and promotion to England's top tier, and became the first American English Premier League player. Harkes returned to the USA for MLS's 1996 launch. His coaching career has included work as an assistant with the New York Red Bulls and head coach of FC Cincinnati in the USL -- and this year's remarkable run to the USL League One title with the Greenville Triumph.

Coaching in times of COVID ...

I think there was a lot of anxiety among the players, from being in isolation, from fear of losing their livelihood, fear that the season may get canceled. We tried to provide some comfort and to let them talk, while trying to be good listeners. From the outset of my second year as Greenville Triumph head coach, we aimed to continue building a culture and protecting what we had already established. Having the right characters, who were prepared to compete and be team-oriented -- having a lot of guys who are selfless -- enabled us to succeed during what turned out to be a season with unique challenges.

We had three false positives -- which still required quarantine -- and some injuries that had us traveling to a game with 14 players. That's one example of the challenges we coped with. It would've been easy to point fingers and be negative about what was going on in our life, but trying to stay positive and keep an optimistic approach gave us all a great perspective. The communication was really, really open. When you're trying to manage a club, communication and being honest in your approach earns trust -- and then they give everything. Our players' self-belief and confidence gave us a competitive advantage.

With and without fans ...

We talked about the emotional connection with fans and how different it would be to play behind closed doors, how it might affect each player. It was different, but our guys stayed focused and disciplined.

When the crowds did come back -- that was little eerie, because we had pushed ourselves to believe that we were creating our own bubble of safety. When we started letting fans back, in small amounts, some of the players were nervous about the safety. But at kickoff, they did a great job of managing and adapting -- to both playing with fans and without fans. You could see a little bit of a lift when we had home fans, even though it was a small, social-distanced crowd, it did create some atmosphere. 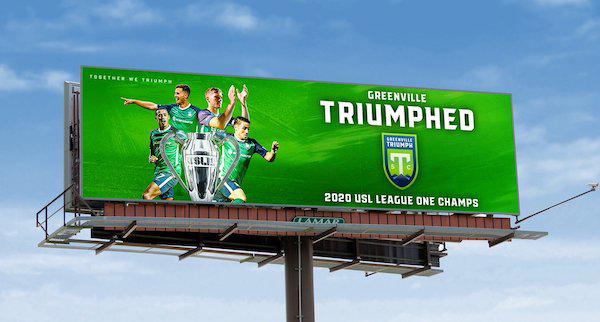 Traveling safely amid the pandemic ...

That was a big challenge, especially because while we were working hard to be safe, wearing masks and gloves, regionally across the country there were higher spikes in some areas than others. And the political attitude that divides had some people not taking it seriously. Going in and out of airports, we encountered situations were, wow, people weren't taking this seriously.

That can put you on the edge. It can be emotionally draining, to be dealing with that while traveling. It's a credit to players and staff for being disciplined. Our athletic trainer, Nadia Najm [who recovered well after the ant attack] became our medical health officer and did such a great job of directing our safety and keeping us prepared. 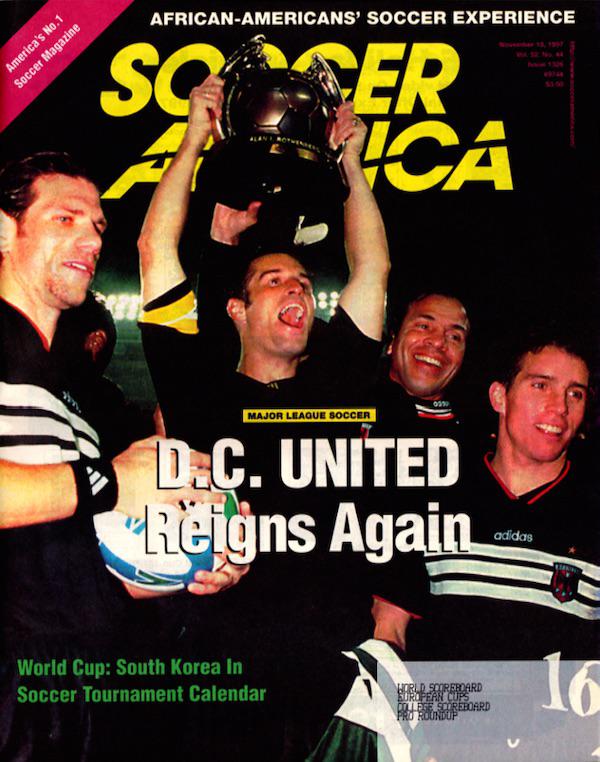 After playing for Sheffield Wednesday, Derby County and West Ham in 1990-1996, Harkes reunited with his University of Virginia coach Bruce Arena at D.C. United and won the first two MLS championships. He played in MLS through 2002, with stints at New England and Columbus. Harkes' son Ian followed his father's footsteps to D.C. United, and is now with Scottish Premiership club Dundee United, for which the 25-year-old started the season's first 14 games in midfield.

Trying to make it in a different country comes with a lot of challenges and he's been fantastic, with a great mentality. The game is a bit faster paced, with higher energy, which sometimes suggests more physicality, picking up second balls, things like that. So he's added that to his game, and also more vertical movement, vertical balls forward, seeing the game and picking the right times to come forward. From being a No. 6 sitting in, re-circulating the ball, he's become a No. 8, a real good box-to-box player. He has that important mindset of aiming to add things to his game on a weekly basis.

My wife Cindi and I coached all our kids, Ian, Lauren and Lily, until about age 13, 14. Once they got the love for the game, the basic principles and technical ability, then we let them go to other coaches for different voices, different styles of play and different perspectives. There were three things that Cindi and I always reminded ourselves in our approach:

One, always try to see a child with a fresh pair of eyes instead of pigeonholing them into a shape.

Three, be honest and never sugarcoat anything. We used a guided discovery approach for them, but when they asked our opinions, we would be honest. We wouldn't give them false information, but tell them directly things like, "You could be better with the ball at your feet," or "you can move it more quickly." Or "Let's work on your agility. How are you doing with juggling today?"

It was never, "You were terrible yesterday ... or you're not doing this or that." But if they were ready to talk, we'd be honest.

With each of them, we started having them coach youth teams when they were 16 or 17, which is great because it teaches them a different perspective. They put a lot of value into it.

Ultimately, it's been fun. My daughter Lauren, when we call each other up, she'll say something like, "Did you see the Liverpool substitution today?" We have those conversations. They're fun. 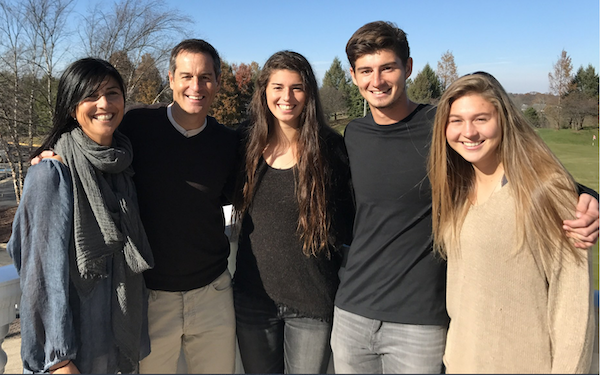 Cindi Kunihiro Harkes (left), who also starred UVA, and John coached all three of their children. Lauren (center) played three seasons (one red-shirt year) at Clemson and one season as grad student at Creighton, in 2019. Lily (far right) is a junior on Elon University's team.

Americans playing abroad compared to his experience in the 1990s ...

There's a lot more support structure in place now. When we went over there, it was like, can I get to a phone booth on the corner of the street and put 17 coins into the slot to call home? Nowadays they can connect to family and friends through texting, social media, FaceTime ... But there's also been been so much progress in the infrastructure of American soccer to prepare and inspire young players. American coaching has gotten so much better.

More so than ever, young American players are exposed to positive influences and competitive environments. That creates hungry players willing to work hard every day to be better, develop thick skins, and learn to adapt to different coaching approaches.

When MLS started in 1996, we were trying to grow and sell the game in this country. Now the exposure kids have to soccer means more and more players at a young age become curious about where soccer can take them. With so many games on TV, they connect to a club and say "Tottenham's my team," or Bayern Munich or Real Madrid or Barcelona "Is my team. I want to be these guys." And they see MLS, whose level has risen, the salaries have increased, the stadiums ...

To see the potential that's out there with players who are 17, 18, 19 years old. Wow. How this country has advanced is really something to be proud of.

americans abroad, usl
1 comment about "John Harkes on a Year of Fear, Anxiety and Triumph -- and American soccer's great strides".
Next story loading