In a friendly rematch of the 2019 Women's World Cup final in which the USA beat the Netherlands, 2-0, the Americans came out victors by the same scoreline. The defensive, tame and uncreative Dutch performance for now at least put to rest fears they're gaining significant ground on the USA. For its part, Coach Vlatko Andonovski's team, which outshot the Dutch 16-2, got its deserved victory despite too many predictable flank attacks and sloppy frontline play. 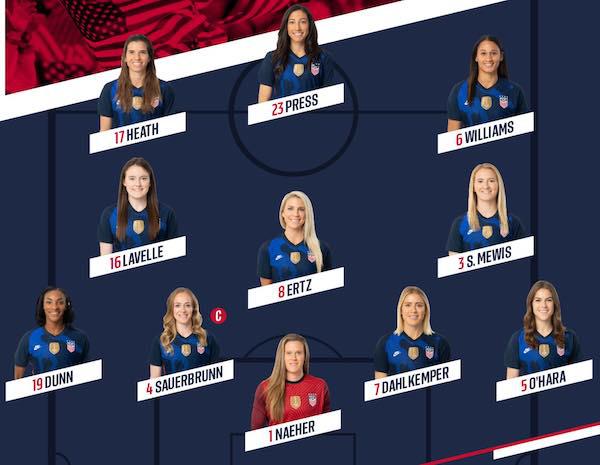 Zero saves were required of Alyssa Naeher, who helped set up the USA's second goal with a Route 1 boot.

Becky Sauerbrunn's interventions included a block of an 87th-minute close-range shot that proved the best chance the Dutch had in the game. Her central partner Abby Dahlkemper also played at a level the Dutch attackers couldn't cope with. Both outside backs, Kelley O’Hara and Crystal Dunn, impressed with swift attacks but disappointed with their passing.

After a shaky start of flawed touches, Rose Lavelle delivered a golazo without which this game's highlights would have faded quickly from memory. Sam Mewis and Julie Ertz most notably contributed defensively.

Soon after kickoff, Tobin Heath delivered a cross that better anticipation from Lynn Williams could have led to an earlier U.S. go-ahead. But Heath's ineffectual play afterward included woeful corner kicks and free kicks. William' shots were of stunningly poor quality, but amid her otherwise fruitless forays she assisted on Kristie Mewis' 2-0 goal with a one-touch flick from Naeher's long, high free kick.  Christen Press' uninspired start included a weak shot straight to keeper but she impressively prepped Lavelle's goal after bringing the ball up from the U.S. half.

Midge Purce flew forward to set up an Alex Morgan strike into the net called offside by a toe-nail. Sophia Smith's debut was notable for a pair sloppy fouls. A sharp finish from Kristie Mewis  provided the USA with a deserved second goal.