MLS Playoffs: Revs have the hot players, putting them on a roll at the right time 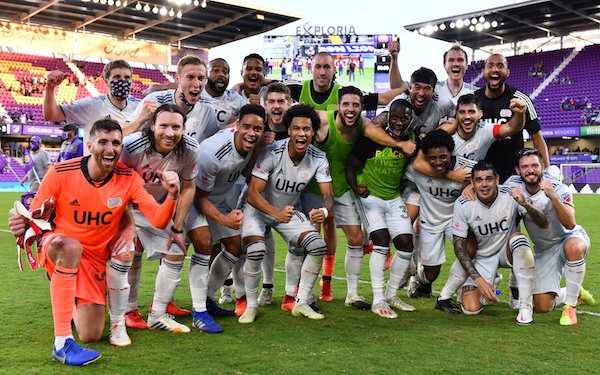 No seed lower than No. 5 has ever advanced to MLS Cup.

After knocking off Supporters' Shield winner Philadelphia in round one, the Revs earned another comprehensive victory on the road with a 3-1 win over Orlando City in the Eastern Conference semifinals.

Argentine Gustavo Bou and Carles Gil were once again the difference, combining for all three goals. Bou and Gil have five goals and four assists between them in three playoff games. They had just five goals and five assists combined during the regular season.

Gil and Bou each scored to stake the Revs to a 2-0 lead after 25 minutes. Junior Urso pulled the Lions to within one goal following a mixup by Revs goalkeeper Matt Turner and rookie center back Henry Kessler in the 35th minute, and the Revs needed a save by Turner on Nani’s penalty kick attempt in the 74th minute to maintain their lead.

Orlando City was playing with 10 players after a red card to Uruguayan playmaker Mauricio Pereyra for a nasty foul on Revs midfielder Matt Polster. In the 86th minute, Gil and Polish forward Adam Buksa set up Gil for the insurance goal.

Revs finished with a 8-7-8 record after winning just one its last five games. But it got Gil back for the last four games after being sidelined for three months with a foot injury. For the playoffs, Revs coach Bruce Arena converted forward Tajon Buchanan to right back.

The young Canadian scored the second goal in the 2-0 win over Philadelphia. He was taken down for the penalty Gil converted for the first goal and helped set up the second Revs' goal scored by Bou on Sunday.

"Clearly, the two goals in the first half were the result of Tajon getting down the field on the right flank," said Arena. "He was outstanding. Carles is always going to be Carles. Another very good game by Carles. And I thought Tajon did very well.”

Arena, who has won five MLS Cup title and finished second two other times, said the key this year was just surviving the regular season, which was reduced from 34 to 23 games due to the COVID-19 pandemic.

"It’s moving your team forward at the end of the year when it matters," he said. "This year, I personally felt the whole regular season was distorted with the pandemic, and the three- or four-month break, and the bubble, and all of that. I think everything that went on in the regular season didn’t make a whole lot of sense on the competitive side, but my hat is off to the league for pulling it off. We pulled off this regular season and now the playoffs under really difficult circumstances, and ownership has come up big in terms of supporting what they’ve had to support to make this work."