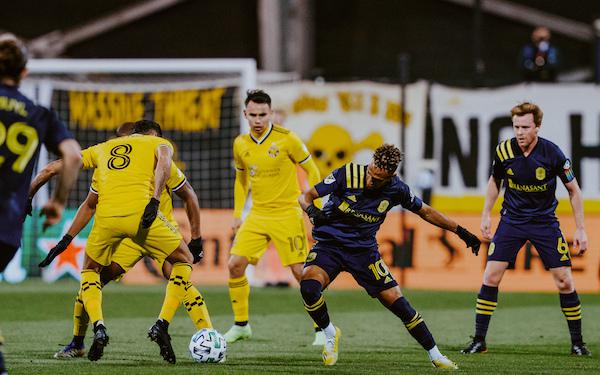 For the third playoff game in a row, expansion Nashville SC shut down its opponent in regulation.

It beat Inter Miami, 3-0, in the Eastern Conference play-in game, edged No. 2 seed Toronto, 1-0, in overtime in round one and stymied No. 3 seed Columbus in Sunday's semifinals.

The Crew had few good chances in regulation but broke through for goals by Pedro Santos set up by Gyasi Zardes and Zardes himself in the first overtime period to win, 2-0, and move into the Eastern Conference final against New England.

Columbus struggled to break down Nashville SC, which should have been no surprise. The Crew had seven players test positive for COVID-19 in the week since its 3-2 win over the New York Red Bulls.

Two starters -- goalkeeper Eloy Room and winger Derrick Etienne Jr. -- had to miss Sunday's game. But just as a big a factor was the disruption in training.

“I knew it wouldn't be perfect today,” said Crew head coach Caleb Porter, “because we didn't even touch a ball for two days last week. Didn't even touch a ball. And the only prep day we had was the day before the game, and it's difficult to do much on that day. We knew tactically they’d be ready, it would be no surprises from what we have to do. But when you don't get reps, then it's not going to be as clean, cohesive and sharp.”

Porter said it's been a challenging year for the Crew, which has a player test positive for COVID-19 on the eve of the MLS is Back Tournament in July and had a game at Orlando City in October postponed after two staff members tested positive.

“I never had a week like this in my life, in my coaching career," he said. "But we have had some moments this year that were similar. And so I think the mentality of the team, I just can't say enough about this group, how resilient they are, how they're able to adapt, how they're able to just keep focused. And I've never been more proud of a group.”