In March, Dartmouth College men’s soccer players headed off for break with classmates. The spring season – always a time of hope and preparation – was around the corner.

They did not return. Like colleges across the country, the Ivy League institution closed its campus as the coronavirus raged. 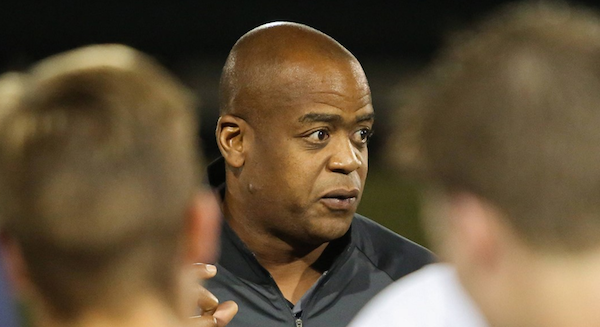 Second-year head coach Bo Oshoniyi tried to keep his student-athletes engaged. The Big Green staff set up a “Daily 4” list. Each day, players were urged to connect with each other via text, social media, Zoom or a phone call. They were asked to work on their mindset, by reading or watching a video. They should have done something with a soccer ball and, through a shared Google Doc, completed a daily physical workout.

Spring was tough. But summer, a time of preparation for the fall season, was filled with hope. In his first season, Oshoniyi – who arrived in Hanover after four successful years at East Tennessee State University – had led Dartmouth to an unbeaten home record. They finished the year with a 7-1-3 run, and paced the Ivy League with 14 goals.

Then came word: The conference would not play a fall schedule. As other leagues followed suit, the college soccer season became a shell of its familiar self.

“That’s when things became real, especially for the seniors,” Oshoniyi says. “We couldn’t compete for an Ivy or NCAA championship.”

They could not compete at all. With only freshmen and senior on campus, just nine players were available for in-person training. Even that was constrained: only fitness in Phase 1, followed by ball and technical work in Phase II.

“It was difficult,” Oshoniyi admits. “But the players’ mentality was high.”

It was hard for the coaches too. “We’re used to competing. We’re used to that intense 14 weeks period. But we all love the game. We made sure our sessions were high level.” They checked in frequently with athletes not on campus, to be sure their fitness, training – and academics – did not waver. Weekly Zoom meetings with the entire team included soccer videos, and games like Pictionary and Jeopardy.

The staff also focused on recruiting. Unable to travel – and with few matches to see anyway – they reviewed tapes.

After months on hold, Dartmouth players and coaches set their sights on the spring season. Not long ago, the Ivy League canceled that too.

“Reality hit again,” Oshoniyi says. “I felt gutted for the seniors. This was their last chance.”

He understood the decision. Not all conference schools have students on campus. And Oshoniyi realizes the safety aspect, with rising case numbers and a vaccine still unavailable. “I give the Ivy League credit for stepping up, and putting student-athletes first.”

Soon he and his staff were preparing once again for the fall – this time, 2021. ”We’ve got time,” the head coach says. “The underclassmen can concentrate on school, and work on their craft. Anyone who plays or coaches knows the importance of camaraderie and being together. No one’s happy, but they’re mature about it.”

The men’s college landscape is a patchwork. The ACC and Sun Belt enjoyed a fall schedule. Thirteen conferences have announced plans for spring seasons. The NCAA is planning for a scaled back  D1 tournament in April and May, but many conferences have yet to confirm their spring soccer seasons.

The impact of those decisions on men’s college soccer is unclear. Before the pandemic, a longtime movement to split the game into two complete seasons – fall and spring – plodded slowly along. This spring’s schedules could offer an unexpected window into what that might actually look like.

COVID-19 has shone a light on college athletic budgets everywhere. Just two NCAA Division I men's soccer programs have been cut (and one was added). But other impacts – on roster size and travel, for instance – could lie ahead. Recruiting will change too. “I feel bad for the ‘21s and ‘22s,” the coach says of the next school graduating classes. “A lot of them have to make decisions without being seen by coaches, or visiting campuses.”

“Money is an issue at every school,” Oshoniyi notes. “We’ve had discussions here. We’re fortunate they’ve all been positive. Our department wants us to compete at the highest level.” Yet this summer, Dartmouth cut men’s and women’s swimming and diving, men’s and women’s golf, and men’s lightweight rowing.

Looking back since March, Oshoniyi sees a few positives. He’s spent more time with his family, and professionally been able to “hone in on my philosophy and perfect my craft. I’ve fine-tuned things I didn’t have time to do. I’m a better coach and mentor.”

He sees growth in his players too. “They’re going through things no college athletes have ever gone through. They continue to grow, as players and people. Coaching is all about developing the whole person, and we’re doing that."