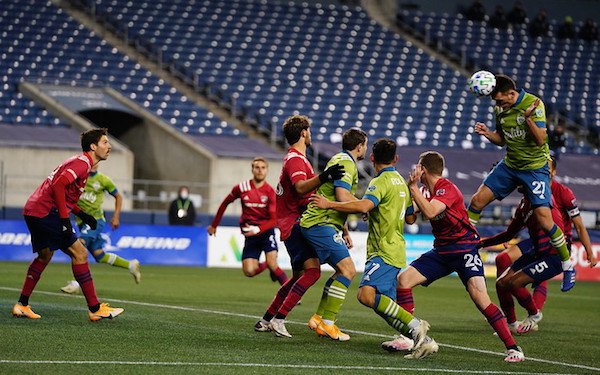 For the second year in a row, Seattle and FC Dallas have met in the MLS playoffs, and the Sounders won both times.

In 2019, it took a Jordan Morris hat trick for the Sounders to oust FC Dallas, 4-3, in a wild game that went to overtime. Starting four academy players and brining two more off the bench, the young FC Dallas team charged back from a 2-0 deficit and gave the eventual MLS champions a scare.

On Tuesday, Seattle and FC Dallas again faced off at what is now known as Lumen Field. FC Dallas' roster has seen quite a bit of turnover with only three starters returning from the team that started a year ago in the playoffs against Seattle.

The Western Conference semifinal did not have the fireworks that last year's match produced as the Sounders won, 1-0, with the lone goal coming on an open header by defender Shane O'Neill off a Nicolas Lodeiro corner kick.

FC Dallas did a good job of shutting down the Sounders' big three -- Jordan Morris, Raul Ruidiaz and Lodeiro -- that combined for all three goals in the 3-1 win over short-handed LAFC in round one of the Western Conference playoffs.

But like in its round-one win at Portland, the FC Dallas attack didn't come to life until the opponent went ahead. The best chances came on a pair of opportunities in the 63rd minute when Michael Barrios’ angled shot struck the far goalpost before fellow Colombian Andres Ricaurte’s rebound attempt was cleared off the goal line.

After an emotional season that saw FC Dallas players quarantined in an Orlando hotel and ultimately kicked out of the MLS is Back Tournament without playing a game, this playoff defeat hurt more.

"It hurts more than last year," said second-year coach Luchi Gonzalez. "Last year was my first year, the first with the staff. Just the next step after the post-Oscar (Pareja) time and Oscar was a big mentor for me and what a beautiful influence he had on me. But we ended the season competing here in an open game, a high-scoring game. But we went for it."

For all the issues FC Dallas faced -- goalkeeper Jesse Gonzalez was released in mid-season after a report of alleged incidents of domestic abuse was made, and midfielder Paxton Pomykal made only one start and was finally shelved after needing surgery -- it recovered to finish with a better record in 2020 than 2019 -- 9-6-7 -- and advance one round further in the playoffs.

"It’s hard to accept because I know the year was difficult, the adversity of the year," Luchi Gonzalez added, "but we were a little step closer in the playoffs but I thought we did well to close the game defensively and make it difficult. I don’t know, I think Jimmy [Maurer] made one or two saves but we did a great job to not give him so much work. But we still fell short on a set-piece and we didn’t put away the few chances that we had so we felt short. This one hurts. This one is harder to accept. Because I see us growing and taking steps in the right direction but the season’s over."