U.S. Soccer teams have long featured dual national players and the current crop of options may be among the most exciting possibilities. But it can be tantalizing torture for fans to get a glimpse of talented performers in U.S. colors without knowing if their choice is permanent. Friendly game appearances don't guarantee a player's lifelong allegiance and FIFA regulations allow for a one-time switch in various circumstances, especially for players under age 21.
* * * * * * * * * *

While each dual national player has a unique, individual situation and a wide variety of factors go into making a final national team decision, there is also a lot of common ground as family, trusted friends and coaches all often weigh in and give advice.

Martin Vasquez has a rare dual-national perspective, not only having played for both Mexico’s national team and the USA in the 1990s, but also having worked as a USMNT assistant coach during the tenure of Jurgen Klinsmann. Vasquez later served as the technical director and coach of Real Salt Lake Academy, where young hopefuls such as Richard Ledezma and Sebastian Soto developed.

“Whenever I spoke to Richy and Sebastian about their dual national options, my advice was always the same, that they should think carefully about where to go,” Vasquez said. “They had possibilities at every age level with the USA and they were always proud and happy to go. Now that I’ve seen them advance with the senior national team, playing against Panama for the USA [Soto scored twice, both from Ledezma assists], it makes me very proud.”

The generation rising up for the U.S. national team at present is enticing due to potential with numerous dual nationals on the team for the two games in Europe and at the current camp in Florida, but the men’s squad is building back from the crushing disappointment of missing out on the 2018 World Cup. By contrast, the powerhouse U.S. women's national team is the current Women’s World Cup champion. The women’s team has a long history of success, including the 1999 championship in the USA, when many impressionable young girls were watching.

“It’s been my dream, since I was 5 and I wrote it on a piece of paper, that I wanted to play for the US women’s national team,” said Sofia Huerta. However, she was contacted by Mexico, the land of her father’s birth, initially for under-20 international play. Surprised by the overture, Huerta sought guidance from her college coach, Jerry Smith, who advised her to pursue the opportunity. “My dad’s side of the family, all still living in Mexico, were super-proud to see me in a Mexican jersey, with Huerta on the back.” 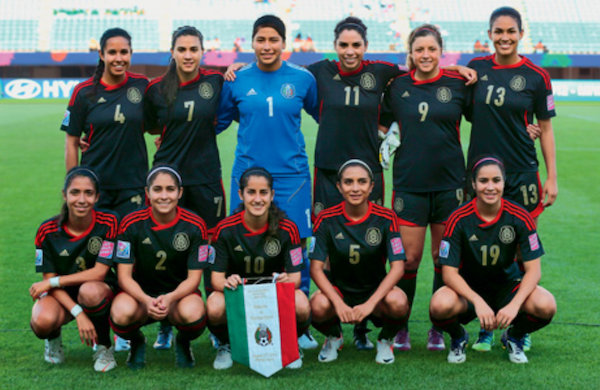 Sofia Huerta (No. 9) was Mexico's leading scorer with three goals during its quarterfinal run at the 2012 U-20 World Cup.

Vasquez, who spent much of his childhood in Los Angeles, was playing as a central defender in Mexico when El Tri came calling in 1991. “It was an honor,” Vasquez said of his three-game stint in the green jersey. “When the USA offered me the opportunity to play, I thought, my children are born here, my wife as well, I’ve had great experiences here, and I was very proud to play.” He eventually appeared in seven games for the USA.

Though she made friendships on the Mexico team she still cherishes today, Huerta realized she didn’t want to give up her childhood dream of making it on the USWNT. “‘Play for Mexico. You could be a star.’ Important people in my life who I really respect said those things to me, but I stayed true to what I really wanted, and that was playing for the U.S. women’s national team.”

Idaho product Sofia Huerta, who played college ball at Santa Clara, made her U.S. national team debut in 2017. Now with the NWSL's OL Reign, her pro career has included stints with the Chicago Stars, Houston Dash and Australia's Adelaide United and Sydney FC.

Sofia made the ultimate decision on which country to represent, ironically, while suited up for Mexico to play against the United States during a friendly match. “When they played the [USA] national anthem, I just connected with it more,” Huerta explained. She maintained faith in her ability to achieve her dream, even as years went by. “I stayed on my path and kept believing if I played well, I’d get the call up one day and in 2017, I did. I made the one-time switch and I have absolutely no regrets.”

Self-recrimination is crippling for a player’s esteem and family assistance is key. “I know the fathers of both Soto and Ledezma,” Vasquez said. “They both left the decision of which country to play for up to the players. They are proud of where they came from [Chile and Mexico], but they understand that their sons feel American.”

With a number of USMNT-eligible players now in clubs in Europe, Vasquez believes it is crucial for players to make the most of every opportunity, whether abroad, or elsewhere. “A player who is playing well in whatever league, whether in Mexico or MLS, should get credit and respect.”

“We were once in the shoes of these players,” Vasquez said. “Now we also want opportunities to coach, with MLS teams, with academies, with national teams. We’ve done well in many of those opportunities. We’ve had good results and we have a lot of experiences. I know Hugo’s goal is to help young people to play the game at the highest level possible. He’s done that in whatever role he’s had. It’s always been our objective.”

Vasquez is fulfilling that mission now with another youth soccer development program in his adopted home city, as Club Director for Los Angeles United Futbol Academy. He anticipates many more dual national players may seek his guidance on where to play. “You have to pick the doors that you think are the best for you and go through them and make the best of them,” emphasized Vasquez. “It’s an individual, personal decision.”

Huerta, who is still fighting for another opportunity with the U.S. women's national team, offered advice as well.

“Listen to others, but respect your opinion the most.”