What are soccer's standards for 'unsporting behavior'?

There was a curious incident during stoppage time of VfB Stuttgart’s Bundesliga game at Werder Bremen on Sunday. With Stuttgart leading 1-0, Bremen was throwing everything into attack. After a long Stuttgart clearance into the Bremen half, Bremen’s defender Ömer Toprak chested the ball back to his keeper, Jiri Pavlenka. Pavlenka was too slow to the ball, however, and Stuttgart’s alert forward Silas Wamangituka  nipped between the two and was able to score his second goal of the game. Zero-two, game over. 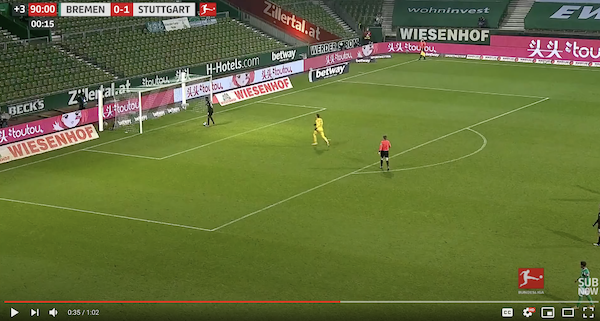 The curious part was the way that Wamangituka scored. He walked the ball toward the net in what kicker magazine described as “a provocatively slow fashion.” He waited until Pavlenka, who knew he was beaten, had run almost all the way back towards the goal. Only then did he push the ball across the line. We used to do this when we were kids in pick-up games – taunting the beaten keeper/friend, then waiting until they had rushed back before rolling the ball into the goal just out of their reach.

Bremen’s Davie Selke was so incensed by what he saw as the Congolese striker’s disrespectful conduct that he immediately confronted him, close up and angry. Both he and Wamangituka saw yellow cards, but referee Frank Willenborg said afterward that the cautions were due to the confrontation. Yet Wamangituka had remained completely calm in the face of Selke’s anger. Any yellow card for the Stuttgart player should have been for showing, according to that shady clause in Law 12, “a lack of respect for the game.”

A few weeks ago, I was faced with a question on my monthly online refereeing exam that read as follows: "A forward has taken the ball beyond all his opponents, including the goalkeeper, and is standing alone in the six-yard box. Now he kneels down and heads the ball into the goal. What decision should you take?" The ‘correct’ answer is: an indirect free-kick, with a caution for the goalscorer due to “denigration of the opponent.” That is, the goal itself should have been annulled because of the scorer’s unsporting behavior.

You can certainly make a moral case for canceling the goal. However, I can’t find anything in the rules to support this case – nowhere does it specifically state that kneeling down to head the ball is not allowed. And if the hypothetical scenario in my exam results in the goal being annulled, then should not Wamangituka’s goal have been overturned as well? This is one of those grey areas in soccer’s rules where five different referees will come up with five different answers, and then the International Football Association Board (IFAB) will issue a clarification or a rule change that will serve to confuse us even more than before (see the history of Law 12, Clause 1: ‘Handling the ball').

Wamangituka, by the way, claimed that he was walking with the ball in order to eat up more time. Is that not also ‘unsporting behavior’? Only, it’s no different to players running with the ball to the corner flag to run down the clock. It may be ‘unsporting,’ but it’s also perfectly legal under the current rules, and there’s nothing a referee can do about it.

Or is there? One rarely cited FIFA rule is No. 5, The Referee. Clause 2, ‘Decisions of the Referee,’ reads: “Decisions will be made to the best of the referee’s ability according to the Laws of the Game and the ‘spirit of the game’ and will be based on the opinion of the referee, who has the discretion to take appropriate action within the framework of the Laws of the Game.” This has to be the most nonsensical paragraph in the book, and it’s up against some pretty stiff competition. What is the ‘sprit of the game’ (note how FIFA encapsulates that phrase within quotation marks)? How much of their own opinion can the referee express? At what point do the game’s spirit and the referee’s opinion collide with “the framework of the Laws of the Game”?

Let’s apply this to Wamangituka’s slowly executed goal. Pretend that you are the referee, and that you have a different moral worldview to that of match official Frank Willenborg. Your opinion is that Wamangituka’s conduct is contrary to ‘the spirit of the game’. Before he can roll the ball into the net, you blow the whistle for unsporting behavior, caution the striker, and award an indirect free kick. The Bremen players applaud (especially the morally impeccable Davie Selke) and quickly take the free kick so that they can chase the equalizer. But you are now surrounded by furious Stuttgart players, less than courteously enquiring how your decision to blow the whistle fits into “the framework of the Laws of the Game.”

All that without even broaching the wider question of what really constitutes ‘unsporting behavior,’ and how it should be handled. Every game throws up dozens of examples of deliberate foul play, gamesmanship, verbal insults and intimidation, simulation, time-wasting and dissent, the majority of them escaping sanction. Yet there’s rarely much outrage at these offenses because they are considered ‘part of the game,’ like the English fouls on Diego Maradona at the 1986 World Cup that we looked at last week. And if they are ‘part of the game,’ are they not also automatically ‘the spirit of the game,' however spoiled that spirit may be?

Wamangituka’s conduct may not have been a delight to behold, but the outcry at his goal-line dallying only serves to highlight soccer’s selective morality. That ethical grey area is enabled by the messy, ambiguous FIFA rules and their total failure to define what we should understand as the spirit of the game, and what we should punish in the way of unsporting behavior.