Jeff Agoos: The MLS vice president who starred on the field during soccer's rise in the USA

Jeff Agoos, the 52-year-old who holds a crucial executive position at MLS, is also among those whose life in soccer since childhood tells the story of the game's remarkable albeit roller-coaster rise in USA. That includes the youth boom, how the NASL inspired, college ball, U.S. World Cup success, the entire MLS era -- and even the indoor game. 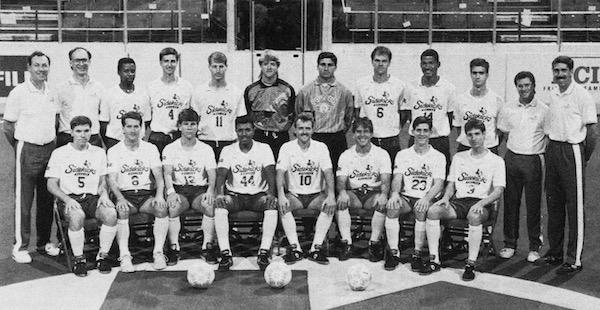 "I started my pro career as a 'defensive runner' for the Dallas Sidekicks," says Agoos (No. 12 in above photo), who between a national championship-winning college career at the University of Virginia that ended in 1990 and MLS's launch in 1996, managed to make a pro soccer living. That included being a full-time U.S. national team player based in Mission Viejo and a stint in Germany, but it started with the Major Indoor Soccer League. "So the next question is, what’s a defensive runner?"

Eleven years before Agoos helped the USA to a quarterfinal finish at the 2002 World Cup -- and five years before winning the first of his five MLS Cups -- he was the indoor league's No. 2 draft pick and returned to his hometown from Virginia with little idea of what playing in Reunion Arena would be like. His first job was to be a defensive runner for star attackers Tatu and Jan Goossens.

"I was told to jump on the field when they lost the ball and just defend," Agoos said. "As soon as we win the ball: 'Get right back off. If you get the ball, pass and come off.'

"On one of my first touches of the ball as a professional, I was defending, and I got the ball. I turned it around. I'm going to goal. I've got all this time on my hands. I get crushed by a player named Rusty Troy. He was about 6-foot-5, 250 pounds, all muscle, he takes the ball away from me. I'm on ground, watching them score. It was quite a crash course in indoor soccer."

Despite the rough initiation by Troy (for the record, only 6-0 and well under 250), Agoos enjoyed the indoor game, which at time included big-time players like Preki, Chico Borja and Branko Segota. He proved worthy of an expanded role and ended up playing 30 games, scoring nine goals and assisting on 10.

"It was some of the most fun I've had in my entire career, but to be very clear, it was not outdoor soccer," Agoos said. "It was completely different. And thankfully it was only one season. It absolutely crushed my body. I've still got a bad back because of indoor soccer."

Agoos debuted for the USA in 1988 under Lothar Osiander and scored in his second game during the two-match trip to Guatemala. In 1992, ahead of the USA-hosted World Cup, U.S. Soccer addressed the problem of its players not having top tier domestic outdoor league by creating a full-time national team based in Mission Viejo, California, for Coach Bora Milutinovic. Agoos played in 40 U.S. games, including a start at outside back in the famous 2-0 friendly win over England in 1993. He was left bitterly disappointed when he didn't make the final squad for the World Cup.

"It was just devastating, but I made a pact to myself to one day make it to a World Cup," said Agoos, who went to France with the USA in 1998 and started the first three games in 2002 during the USA's best modern era World Cup appearance.

When MLS launched in 1996, Agoos reunited with his UVA coach Bruce Arena and reached the first three MLS Cups with D.C. United, winning the first two. He won his third in 1999 under Coach Thomas Rongen and two more with the San Jose Earthquakes, in 2001 and 2003, under Coach Frank Yallop. He was one of four 1996 D.C. United players named to MLS's 25 Greatest team released on Wednesday.

After retiring in 2005, Agoos served as Sporting Director of the New York Red Bulls in 2007-2011 before joining the league office as Vice President of Competition. In 2018, Agoos became MLS's Senior Vice President, Competition, Operations, Medical Administration. His duties include being the principal point of contact between MLS and PRO (Professional Referee Organization). 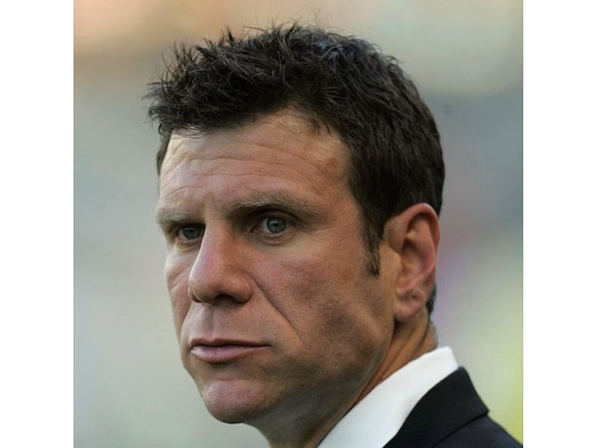 Fortunately, I think we had really a strong showing this year in terms of the responsibility on the field by players and by coaches. I think this has been one of our better years. That being said, on a Monday or Tuesday, I think most of our GMs have me on speed dial, and we hear from them quite often about the decisions we've made or didn't make. It's an interesting dynamic where in one week we speak very vociferously with one club and then in another, they’re on the other side of the coin.

A typical week on the job.
I don't think there is such thing is a typical week, to be honest. That’s how the sport works. It’s something different every day, if not every hour, and with COVID, it can change to the minute. The most challenging part of my job is it's not the same job every day. And the best part about my job is it’s not the same job every day.

I'm incredibly lucky and fortunate to be in the position that I'm in -- to be working at the league office and being able to impact the game. When you're a player you can make an impact in 90 minutes. Whereas as an executive or administrator, it might be nine months or a year to see how you’re making a difference. You have to understand the dynamics of creating consensus and while making sure your decisions benefit the spirit of the game, the good of the game.

A season during COVID.
We've essentially been the main resource for our clubs in terms of what testing looks like, procedure protocols. We work very closely with our Dr. Margot Putukian. We have a joint committee that's made up of infectious disease specialists, both from MLS and the MLS Players Association. We work very collaboratively trying to make sure that our priority is the health and safety of our players. That's obviously been the biggest piece this year in terms of just you casework and load.

In the span of one season, we've really had three different competitions: pre-COVID, the relaunch with the MLS is Back tournament in Orlando -- a 51-game schedule over the course of six weeks -- and then the return to market. We've been able to essentially play 316 games out of the 400-plus games we would have played, which is I think an incredible feat. 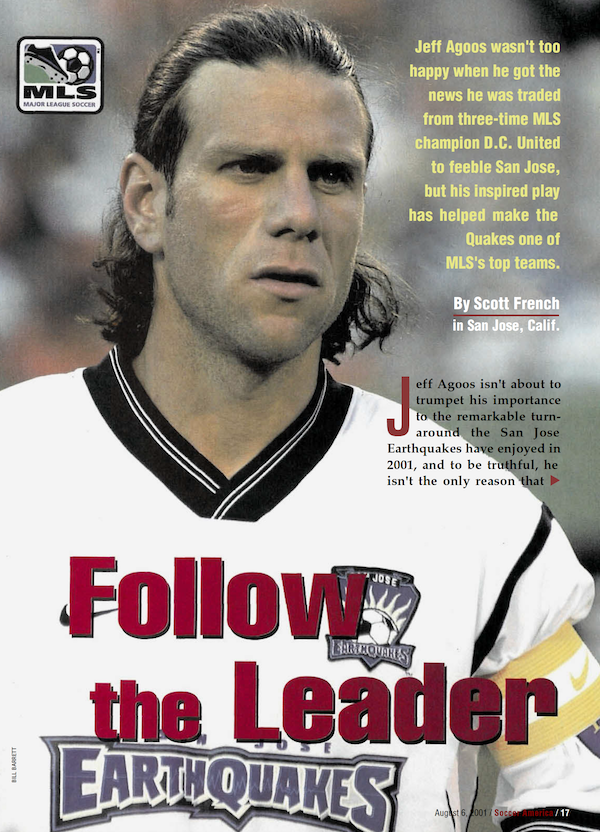 Agoos, who won three MLS Cups with D.C. United, two with San Jose, and was selected to the MLS All-Star team 11 times, finished his career in 2015 with the MetroStars. On MLS now compared to his early playing days.
Everything is different. We started with 10 teams, we have 30 now. We had no soccer-specific stadiums when we started. We'll have 27 world-class soccer venues purposely built for MLS. We have some of the best players in the world playing in the league and some of the best coaches and GMs here. So it is definitely a league of choice.

Our supporters culture is completely different. Although I got spoiled in D.C., where we had one of the first supporters’ culture that developed, there’s been an escalation of that supporters' culture to where we have fans that are unlike any other sport here in the United States.

We didn't even have MLS youth development back in the early days. It is a night and day difference between where we are today and where this first started in 1996. 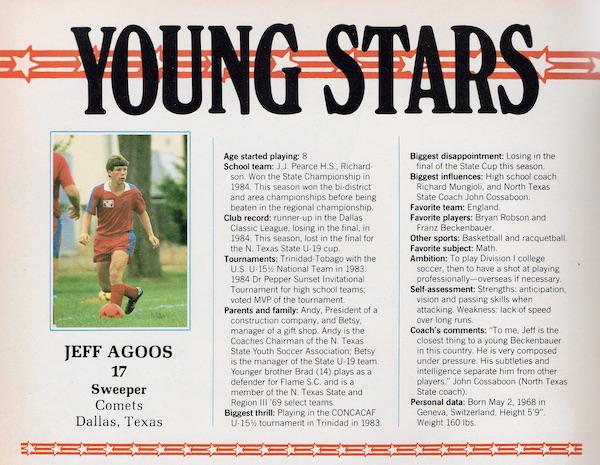 Jeff Agoos profiled in a 1985 issue of Kick Magazine (whose executive editor was Paul Gardner).

Falling in love with soccer.
I knew when I was in eighth grade I wanted to be a professional soccer player. I loved everything about soccer. I grew up on the old North American Soccer League with the Dallas Tornado. They played at Ownby Stadium on Southern Methodist University campus. My parents took me to a game. I was completely in awe of what they could do.

Childhood role models.
With the Dallas Tornado, I loved Steve Pecher. Kenny Cooper was the goalkeeper at the time. Kyle Rote Jr. was one attacking players. One player I remember clearly was the Brazilian, Zequinha. His first touch was just incredible. He wasn't real physical, but he'd run up and down the line and just do amazing things.

And obviously back then Franz Beckenbauer was a huge piece for me, a huge role model. I just watched him all the time.

His youth coaches.
Richard Mungioli was my original coach with Flame Soccer Club and was also my high school coach. Keith Hodder, great guy, was my coach [with Comets]. He didn't shout. He wasn't a helicopter coach. It was very cerebral. He presented things ways where he'd ask you questions, a Socratic method. He made you think about the game, think about the tactics. Between Richard and Keith, they were very big influences on my career.

MLS taking on the running of the USA’s elite boys league, MLS Next, in the wake of U.S. Soccer ending the DA.
Fred Lipka and Gordon Bengtson are managing that and it's quite a big project. I think the Federation has been in the business of player development because they've had to, because there weren’t enough resources for clubs to do that. If you look around the world, the clubs are the ones responsible for developing players. I think it'll be a critically important piece to the league.

men's national team, mls
1 comment about "Jeff Agoos: The MLS vice president who starred on the field during soccer's rise in the USA".
Next story loading