That’s not the motto of the 30,000-member organization’s many offerings. But it might be.

For years, the courses – which, along with U.S. Soccer offerings, are the two major pathways to certification in this country – attracted a certain type of student. They were often male; often in the college, club or high school ranks, and often able to spend hundreds of dollars and several days at a central location listening to lectures, learning tactics, and being tested at the end.

Even before the pandemic, United Soccer Coaches’ courses were changing. “Content should be available to anyone who wants it,” says Ian Barker, director of coaching education. “There are many different types of coaches, and many different learning styles. We should create as many different ways of getting information across as we can.” 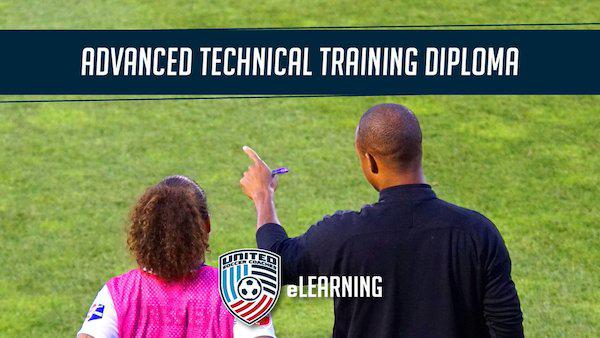 The cancellation of in-person courses derailed many would-be students. Barker and Ganzberg saw it as a challenge. Quickly, they created formats to replace lengthy, on-site sessions. Fortuitously, the changes reached far beyond the opportunity to engage coaches who otherwise could not spend the time and money to travel for a coaching license.

“Blended” courses include four elements. First, registrants receive access to online learning with videos, PowerPoints and other material. They access it whenever it is convenient. Cohorts are then created, for small groups to participate in virtual classrooms. Chat rooms and question-and-answer sessions add intimacy.

In-person sessions, with hands-on instruction and demonstrations, have been shortened from one week to a weekend. They’re scheduled as locally as possible.

The final piece is video assessment. Coaches submit a tape of a session working with their own players, in their own environment. That replaces the previous final assessment, described by Barker as “stressful. It comes at the end of a tiring week, working with what might not be the age or gender or level you normally coach.”

The first two elements have worked well, Barker says. The in-person sessions and video assessments hinge on the ability of groups to get together again, when coronavirus restrictions ease.

Close to 300 coaches have taken the first two phases since August. That’s more than United Soccer Coaches normally serves in that period.

Meanwhile, the pool of candidates has evolved. Courses now include a good mix of full- and part-time coaches, plus grassroots volunteers; those with long playing experience, and others with none.

“This is not a scientific survey,” Barker warns “But we’re seeing more young women, and more young college assistants – people in their 20s, just starting their careers.”

Importantly too, students are speaking up more often than they did in full in-person courses. “In a classroom or on the field, you get one or two people who dominate,” Barker notes. “In the breakout rooms and chat feature online, we’re getting lots of good questions. People seem more empowered, less intimated. They’re more confident expressing what they know, and not as reluctant to admit what they don’t know.”

That fits with Barker’s belief that non-hierarchical education works best. United Soccer Coaches’ instructors are knowledgeable and experienced. But, he admits, not everyone may have the knowledge and experience to work at, say, a U-10 level, or with high school girls. 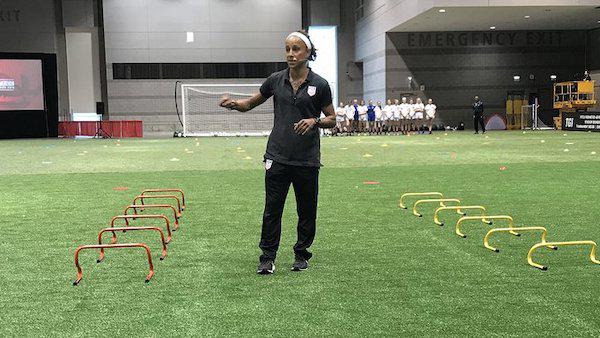 He is pleased to see the pool of instructors broadening too. Online courses offer the chance for people who, because of age or work commitments cannot commit to traveling to teach a week-long course, to gain experience as coaching educators. A number of different men and women – including minorities, and those dispersed geographically – have helped write content for the online courses.

Another boon to United Soccer Coaches: less worry about canceling a course if not enough people sign up. With what is in effect “rolling admissions,” coaches can begin the online portion of a blended course at any time. 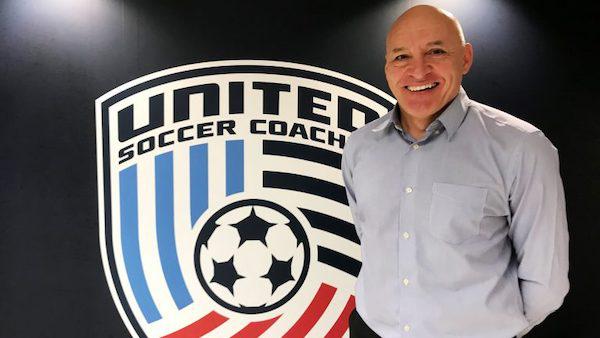 Ian Barker has been Director of Coaching Education Products & Programs of United Soccer Coaches since 2012.

Barker and Ganzberg have begun planning live weekend activities. He’s excited by the opportunity to design them around local events. For example, one group might watch a college men’s or women’s match and meet the coaching staffs before and after the games, along with traditional on-field sessions. He hopes to organize weekends around MLS and NWSL matches too. The coming-out-of-COVID calendar is unclear. Now, in lieu of in-person sessions, coaching course candidates can access 50 different sessions at United Soccer Coaches’ virtual convention next month.

At some point of course, full-time on-site courses will return. When they do, Barker says, they will include some of the new “cleaner, more up-to-date” content.

And, no doubt, many of the new-look coaches too.