Amid the pandemic, finding soccer joy by passing it on to those we love

Given the scale of loss of a global pandemic that has already seen more American dead than would fill the Rose Bowl three times over, it’s a trifling deprivation for my child to miss out on what would have been her first year playing organized soccer. AYSO, which started in Southern California in 1964, with the late great Sigi Schmid  as one of the players on the initial teams, has programs for players as young as 3. Or did, before Covid-19 canceled AYSO programs.

I started playing soccer around that age, mostly because my older brother needed someone to kick the ball around with. We’d head outside to the field steps from our house, playing for hours, often against the two brothers who lived on the opposite side of the field. Older siblings teaching the younger ones is a soccer tradition. Landon Donovan could barely walk when his big brother, Josh, started kicking a soccer ball at him. Clint Dempsey initially learned the sport from Ryan, five years his senior. Our family moved quite often, including to different countries, but with a soccer ball tucked under his arm and me as a built-in teammate, my brother had a knack for making new friends through soccer games wherever we went.

Of course, given the restrictions of keeping interactions as safe as possible from spreading coronavirus, my daughter can’t play with any neighborhood kids, and as she is so far our one and only, there are no soccer playmates her age available in our family bubble. Frustrated and resigned about the lack of alternatives, I’ve dug out my old Umbro cleats from the attic storage and have planned trips out to the soccer complex where she might have been learning with wee teammates in a normal year.

She has been watching soccer on television since she was born and kicking soccer balls of various sizes around the house since she could walk, so the concept of how to play wasn’t completely new to her, but the first time out on those large fields, looking eerily empty with the once omnipresent nets all removed, she just wanted to run randomly, aimlessly. Perhaps after months of house confinement with only a patio and a garden plot as safe outdoor space, running until she was exhausted felt like true freedom. 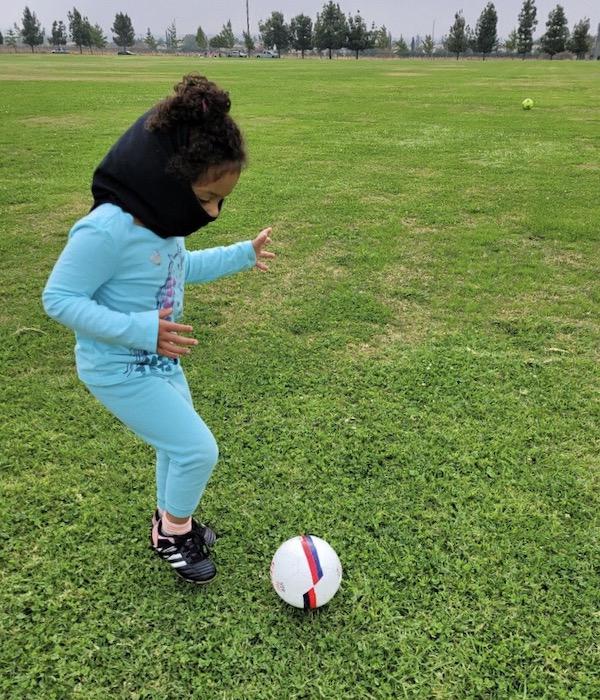 Nicolas Lodeiro of the Seattle Sounders makes training and playing soccer with even very young family members look easy, but of course, he’s a consummate pro. Though I’ve been inspired by every U.S. women's national soccer mom from Joy Fawcett on, I haven’t played any rec league games since I had my daughter and my trusty Umbros have gathered dust.

My brother placed a backpack on the grass to serve as a goalpost and paced off a generous goal size. I added my purse as the other goalpost and suddenly realized it would be the first time that we, who had once played soccer together daily, would be playing together since our high school days. Our small school back then didn’t have a girls team, so I played on the boys team.

On the field, my mother coaxed her grandaughter, my little girl, to line up to shoot on the rudimentary goal by demonstrating a few shots herself. My mom had been one of the earliest players to sign up for a Latina rec league team in our town, practicing every evening and playing games twice a week. I took my first game notes on her matches, clutching a grubby pencil on the sidelines.

I am under no illusions that my little girl is going to grow up to be the next Marta. I do want her to have fun with soccer, though, and if possible, learn to love the beautiful game. Beyond that, I’ve curbed all expectations. So much of life ends up being what one never anticipates. She ended up taking multiple shots on goal while we cheered her on extravagantly, and then we all played simple passes to each other, counting every successful redirection. After about 40 minutes, she was weary and we all headed home. 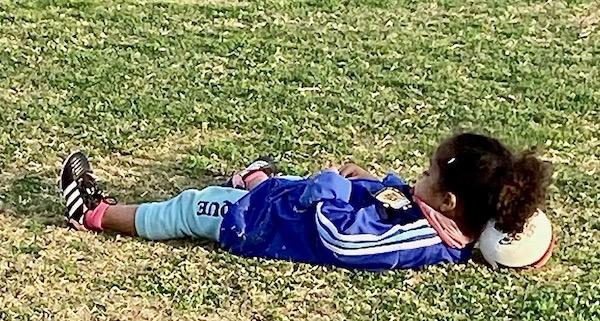 We are lucky. We are still healthy and so far, our many precautions, especially vigilant mask-wearing, have held out against illness. Though hospitalizations are up and a grim winter with more Covid-19 deaths is closing out the year, respite is imminent. Soccer, blessedly, is again available to watch on television, even as mostly empty stands and masks on the sidelines remind viewers the pandemic is still with us, as do the regular reports of athletes who have tested positive. Yet the minor miracle of vaccine dosing is beginning and a return to normalcy should happen at some point in 2021.

Everyone has different coping strategies in any crisis. For me, the sport of soccer, whether playing it, watching it or even merely thinking about it, has been a lifelong enjoyment. A simple game, yet endlessly entertaining, confounding the intrusion of much technological interference for generations, beloved the world over, interpreted and manifested by each generation of players anew. For all the lessons we’ve been forced to learn in 2020 about what matters most, I hope we also save room and time for the things that bring us comfort and joy and share them with those we love, however we’re able.

coronavirus, youth
4 comments about "Amid the pandemic, finding soccer joy by passing it on to those we love".
Read more comments >
Next story loading