Comparing youth leagues in the wake of the DA's demise

When the Development Academy folded its tent earlier this year, MLS immediately launched its own academy to keep control of its clubs’ youth efforts. Some clubs still jumped over to the ECNL, and a few put teams in both national leagues.

On the girls side, where the ECNL had already kept a lot of its clubs from the upstart Girls DA, the ECNL claimed even more top clubs, even as the new Girls Academy league popped up as a new outlet.

If we’re comparing the youth soccer turf war to the Star Wars saga, this is Episode VII: The Force Awakens. The ECNL rebellion is still intact, but the establishment entity has evolved from the Empire (DA) to whatever Snoke and Kylo Ren led (MLS Next, GA). That’s not a value judgment in which the ECNL is on the light side of the Force -- there are some arguments that the Empire and First Order were actually the good guys in the universe, and there are some arguments that U.S. Youth Soccer, like the old Republic before Palpatine’s shakeup, was bogged down in bureaucracy before the rebellion. Or would it be the Clone Wars?

The problem: What are parents supposed to make of all this?

Go to your local parents’ message board, and you’re likely to see anonymous arguments about the ECNL, MLS, the GA and any local “elite” league that may, in some cases, be better than the local national-league clubs. The arguments are driven less by objective information and more by parents’ obsessions with justifying the thousands of dollars they spend and the thousands of miles they drive.

For the most part, there’s no objective information to be had in the first place. But we can start with a few numbers.

Let’s say this at the outset: All youth soccer rankings should be taken with a grain of salt. Maybe a silo full of salt. The ubiquitous rankings at GotSoccer, a site that provides the technology a lot of tournaments and leagues use for schedules and results, draw complaints that some clubs “chase GotSoccer points” by playing as many events as possible.

Enter YouthSoccerRankings, a site that gathers results from GotSoccer but also pulls in results from leagues that don’t use the GotSoccer platform. Its rankings are determined not by a points-per-event system but by something akin to Elo rankings or college sports’ RPI ratings -- win and move up, lose and move down.

Still, we’re talking about youth soccer here. Maybe a team played a tournament without three core players who were taking the SAT. Maybe a team brought in guest players. Maybe a club in a “club-centric” league had to borrow teams from another club to fill age-group gaps, and those results are being credited to the borrower rather than the lender. (This is a real situation in the mid-Atlantic Club Champions League.)

Also, the Development Academy severely limited interplay between its clubs and the proletariat, which limited the available data.

And this year, rankings may be especially skewed because some states are playing a full slate of games and some states aren’t playing at all. A U-13 team may have played no games since expanding its roster to move up from 9v9 to 11v11. For that reason and a few others, SoccerWire has put its overall rankings, drawing data from its partner YouthSoccerRankings, on pause. That’s plenty of salt. With all that in mind, the rankings still give a rough idea of who’s playing at an elite level. Maybe there’s little difference between No. 2 and No. 22. We’d still expect a difference between No. 2 and No. 202. Also, we can explore the outliers -- is there a reason MLS Next or the ECNL includes a club that doesn’t have a lot of highly ranked teams?

So we’ll use those rankings as one measure to gauge the comparative strengths of MLS Next (boys), the GA (girls) and the ECNL (both) in girls soccer.

I checked rankings in September and again in October. I considered only the top-ranked team for each club in each age group.

I awarded overall points as follows:

The only age groups used were U-14 through U-19 (thereby avoiding the problem of dealing with U-13s who may never have played 11v11). Therefore, the top possible score in each gender was 30 (5 points in each of the 6 age groups).

Only one club got all 30 points -- Solar SC’s girls. Fellow Dallas club FC Dallas got 29 on the boys side and 29 for the girls. Yet another club from the region, DKSC (aka D’Feeters), was third on the girls side with 28.

As carefully as these rankings were compiled (we’re talking weeks, part of which was spent learning the basics of the programming language Python and some advanced formulas in Excel), some clubs aren’t adequately represented. The most notable is New Jersey titan Players Development Academy (PDA), which had several teams fall through the cracks at YouthSoccerRankings -- perhaps because its teams may be listed as “PDA” or “Players Development Academy” in different competitions, which I tried to take into account -- but is ranked a reasonable sixth at SoccerWire’s most recent effort in June.

The compiled data, along with ranking and league information on more than 1,400 clubs, is available at my site. The summary is as follows:

Girls: It’s not close. ECNL clubs averaged 14.2 points to the GA’s 10.3. And it’s not that the ECNL is top-heavy; the median ECNL club had 15 points, while the median GA club had 10. ECNL clubs accounted for 10 of the top 11, interrupted only by Atlanta club NASA Tophat SC.

The ECNL’s strength isn’t a surprise. The Development Academy struggled to convince many top clubs to make the jump from the better-established ECNL. When the DA closed, some of its clubs leapt to the ECNL, leaving the GA to draw from the rest of the DA and some clubs that had been playing in neither league.

But the GA still isn’t scraping for competitive clubs -- roughly half of the clubs in the GA had at least one team in the top 50 of its age group.

Neither league has a monopoly on the top clubs. Broomfield SC (Colo.) and Las Vegas Soccer Academy have strong teams across the board.

Boys: This, to borrow a song title from Run-DMC, is tricky.

If you were to give grades based on the clubs’ rankings, the ECNL would be an A-minus. MLS Next would be incomplete.

But the caveats are:

And the top 12 clubs at SoccerWire are at least halfway in MLS Next. They’re familiar -- FC Dallas, Philadelphia, the two New York MLS clubs, LAFC, the Galaxy, etc. Solar SC, the only club with a perfect 30 in girls’ soccer, is the top club whose senior team isn’t in Major League Soccer, and it has teams in both leagues.

So we can look at it this way: MLS Next has the best collection of teams. But the ECNL has greater breadth.

Of the 25 clubs with at least 18 club points, only four are exclusive to MLS Next, and one of them is Bethesda SC rather than a club with an MLS senior team. Nineteen have an ECNL presence. One (South Carolina Surf/United SA Mount Pleasant) has its top teams in U.S. Club Soccer’s NPL; another (Triangle United SA) is in U.S. Youth Soccer’s national and regional leagues.

Triangle United isn’t alone in being outside the big leagues’ umbrella in boys soccer. MLS Next and the ECNL are missing a lot of clubs that are quite strong by any standard -- Oxnard (Calif.) United, Sparta (Utah) United, Kalongi SA (Ga.), Players SC (Nev.) and at least a dozen more.

What does this all mean?

Turf wars aren’t just about rankings, of course. These leagues are competing on the business side, and the Girls Academy has landed partnerships with MLS, U.S. Youth Soccer and, just announced while this is being written, adidas. 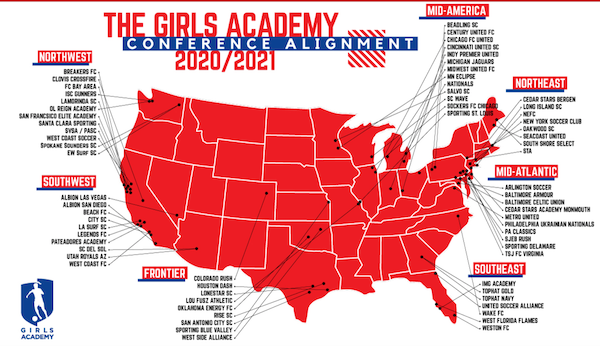 But they’re mostly about turf. Check out the GA map, and you’ll see a strong presence in the country’s most crowded areas -- the Mid-Atlantic I-95 corridor and Southern California, where you could throw a few darts at a map of neighborhoods and come up with a legitimate elite league. The ECNL (map below) can honestly claim to have less travel, with big clusters in Texas, the Southeast and some of the more sparsely populated states. 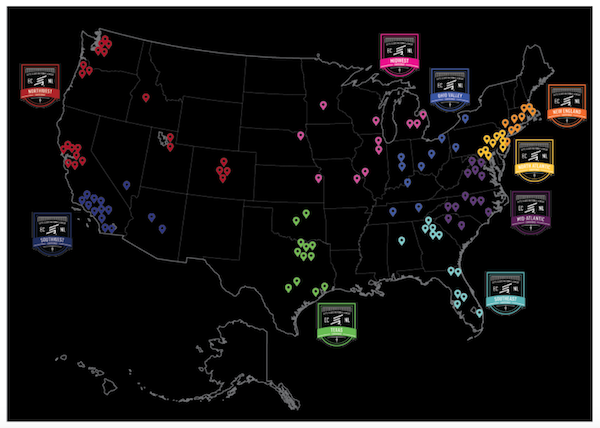 And the ECNL (map below) has greater national coverage in boys soccer as well. Aside from the Great Lakes region, clubs barely have to travel more than one state over. 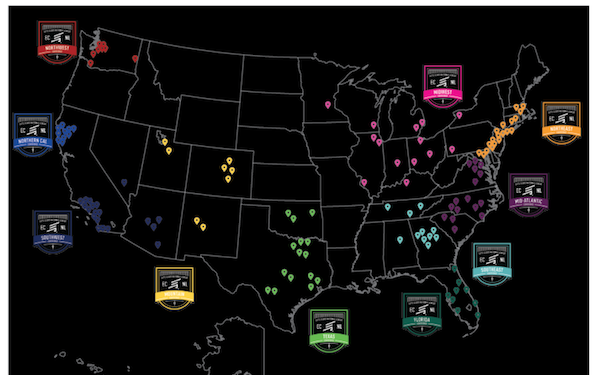 MLS Next doesn’t have a current map, so I created one (below) that shows some lonely outposts in the Central and Mountain time zones. The league also made some puzzling choices to have more representation in some markets. 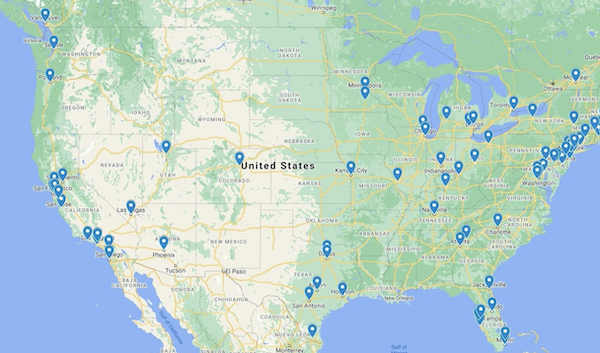 Consider Maryland, Virginia and D.C. Of the five clubs in SoccerWire’s top 100, MLS has two, ECNL has one, and the other two are in U.S. Youth Soccer’s leagues. Of the 15 clubs with eight or more club points by my calculation, MLS has two. Four MLS clubs have fewer, though D.C. United gets an asterisk because it has few active teams getting picked up in the rankings.

But rankings aren’t the sole measure of a club, of course. Alexandria (Va.) Soccer Association holds up quite well in the rankings but also has a well-deserved reputation in Northern Virginia for playing possession soccer, even at early ages in which some coaches think kids don’t know how to pass the ball. Sockers FC Chicago doesn’t have great numbers right now for whatever reason, but it has a steady pipeline of players reaching the pros and even the national team level.

We can conclude that the Girls Academy has a bit of work to do to catch up to the ECNL in terms of national reach. But they’re laying the groundwork to do so.

The more difficult question, though: Is there really a benefit in signing up to travel great distances rather than playing one’s neighbors?

One example: Here’s the Colorado Rush travel itinerary in the GA this fall:

Then nine straight home dates. But in the spring, COVID permitting, the Rush will venture to Houston (possibly twice) and San Antonio.

They’re not alone. Wake FC went seven hours up the coast to play in Pennsylvania, and they went 6½ hours the other direction for a weekend of brutal losses to Atlanta powerhouse Tophat. (The home games against Tophat went a lot better.) In the spring, they’ll be off to Florida. They will not be playing neighboring North Carolina FC or taking a pleasant day trip to Wilmington to face the Hammerheads.

Aside from the comparisons above, rankings serve a more important purpose. They help tournament directors seed their brackets. Here, we’re seeing teams travel 300, 500, even 900 miles for games that a tournament director would never make.

So we can’t really declare winners or losers in the turf war. But can we declare a truce?