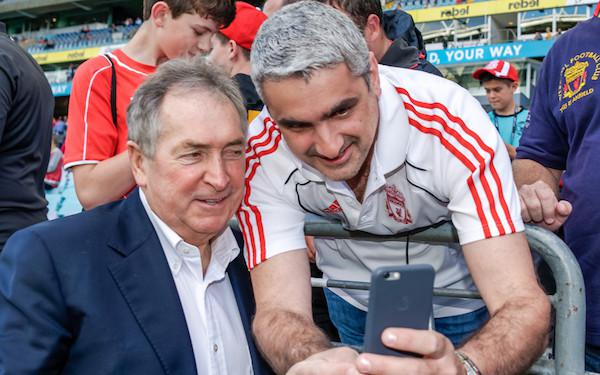 Other coaches might have enjoyed more success on the field than Gerard Houllier, though five trophies in one year with Liverpool is nothing to sniff at.

But few coaches have had more influence on the game at so many levels than the 73-year-old Frenchman, which explains the outpouring of emotion that accompanied his death on Monday at his home in Paris three weeks after undergoing aortic aneurysm surgery.

Players and coaches whom he met in his travels around the world all knew his story.

In 2001, Houllier escaped death by minutes after taking ill at halftime of a Liverpool game against Leeds United. He excused himself and went to the bathroom. His players returned to the field not knowing what happened. The Liverpool team doctor sensed something was seriously wrong, and Houllier was rushed to a Liverpool hospital, where it took doctors 11 hours to repair a dissection of the aorta.

Houllier dealt with heart issues the rest of his life. He consented to the latest surgery even though it was risky. He was weakened but returned home on Sunday to keep the Zoom call he had every Sunday since the pandemic started to talk soccer with fellow Frenchman, Arsene Wenger, and David Dein, Wenger's former boss at Arsenal.

A former English teacher, Houllier took up coaching in his 20s and rose through the ranks of French soccer's lower divisions, first at Nœux-les-Mines and then Lens.

He led Paris St. Germain to its first league championship in 1986 and later won two championships at Lyon. His greatest success came at Liverpool, where he had spent a year as a teaching assistant in the late '60s. In 2001, the same year he needed heart surgery, the Reds won five trophies (FA Cup, League Cup, Charity Shield, UEFA Cup, UEFA Super Cup).

But most French fans remember Houllier for his tenure in charge of the French national team and one game and one goal.

In one of the worst choke jobs in the history of international soccer, Les Bleus were eliminated from the 1994 World Cup when they lost to Bulgaria, 2-1, on a goal by Emil Kostadinov in the game's dying seconds.

The French had a free kick in the Bulgarian corner. All they needed to do was play the ball around and run out the clock. But David Ginola decided to play a long pass across the field to no one in particular. The Bulgarians picked up the ball, raced down the field and scored, taking France's place in the finals, where they finished fourth.

"When I die," Houllier later said, "they'll be playing that goal over and over again."

The fact is, the same thing happened in the previous game. France needed one point from its last two games to qualify for the World Cup. It blew a 2-1 lead against Israel -- also at home -- and lost, 3-2, on a goal in the 89th minute.


Houllier stepped down as national team coach but remained with the French federation, where he worked as technical director. He took charge of the French U-19s, working with Thierry Henry, David Trezeguet, Nicolas Anelka, William Gallas and Mikael Silvestre, the first of several generations of exceptional talent.

Houllier was a pioneer in player development and returned to the French federation as technical director a second time in 2007-10, emphasizing skill development, honing the development of players at the ages of 12 and 13 and breaking down barriers for former pros to become coaches.

"It's a sad day for French football right now because he was very intelligent, at the start of a lot of stuff that now clubs are enjoying," said Henry on Monday. "When you obviously talk about the likes of Clairefontaine [the French national training center] and the youngsters that you see everywhere coming through all the time, playing in different leagues, coming through France, he had a lot to do with that. It is a sad day for French football, but I guess we have to remember him as a great man that he was and a great coach that he was."

Houllier returned to coaching one last time, an unhappy one-year spell at Aston Villa, before becoming the head of global football for Red Bull in the summer of 2012.

That work took him to MLS, where he oversaw the Red Bulls. Behind the scenes, he was influential, advising the Red Bulls to keep Bradley Wright-Phillips despite a poor first season in MLS (one goal in seven games). In the next season, BWP tied the then-league record with 27 goals and went on to score 80 more goals for the Red Bulls over the next five seasons.


Houllier's eye for talent helped Salzburg become a European destination with the signing of players like Sadio Mane and Naby Keita, whom he had followed at small French clubs.

In his later years, Houllier didn't just work for Red Bull. He returned to France to work as Lyon president Jean-Michel Aulas' "conseiller." Houllier did it all. He babysat the club's Chinese investors, reformed the Lyon academy -- one of the best in the world -- and traveled to evaluate the Lyon women -- Europe's best team -- at big matches.

When Aulas decided to buy the NWSL's Reign FC, he needed someone familiar with the American market. Houllier was his man.

“Over the last year Gerard was incredibly generous in sharing insights and advice, helping shape the club we strive to become.," said OL Reign CEO Bill Predmore on Monday. "His vast knowledge of the game was coupled with an uncommon kindness and humility that was inspiring to all."