Searching for solutions to the global problem of referee abuse

When I began refereeing youth games in the United States 12 years ago, I was surprised at the number of players who complained about decisions during the course of the game. When I played both youth and amateur soccer in England during the 1970s, 80s and 90s, dissent was almost unheard of. Referees were respected, and their decisions were accepted. Quite simply, if you could not conform with that simple demand for sporting behavior, you didn't belong on the field.

When I moved to Germany six years ago, I was in for a culture shock. U.S. youth soccer was a mild and gentle breeze compared with the hurricane of anger, intimidation and profanity that came with officiating Frankfurt's youth and amateur leagues. I coped by developing a thick skin and pouring my heart out in a game-by-game blog every Monday morning Was it just me? Not at all -- meeting other referees and hearing their tales of war and woe helped me to stop taking things personally. That's just how the game is here, and you can take it or leave it.

The problem is that many match officials are choosing to leave it. And when you read the thorough academic research carried out by the University of Portsmouth's Tom Webb and his colleagues, who surveyed more than 8,000 referees worldwide in a variety of sports, you begin to understand why. Be it in Australian field hockey, English rugby or Dutch soccer, verbal and physical violence against referees continues to rise, with a correspondingly drastic fall in recruitment and retention.

The decline in referee numbers, however, stems not just from a change in attitude among spectators, coaches and players in an era when winning at all levels seems to have assumed a disproportionate importance in public life. It also lies within weak sporting institutions and administrations that provide poor training and support, and to some extent among referees themselves, who do not report enough instances of abuse. Many referees feel that their complaints and reports either go nowhere, or that miscreants are not properly punished. Some referees believe they have to be of "strong character" and must man up to abuse, so there's no need to report or punish it. Too often, solidarity and support networks among referees are lacking or completely absent. 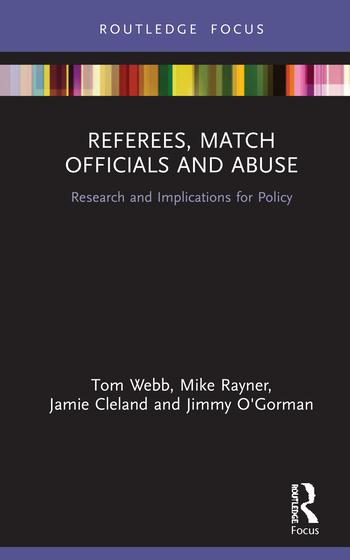 Webb and his colleagues identify the importance of training and mentoring, especially to keep young referees from quitting at the first sign of trouble. Disciplinary hearings need to be held, and miscreants held to account, with follow-up mental support for referees who have been abused. Fines must be harsh enough to be effective, and referees should be updated on the disciplinary process so they feel that it's working. (In Frankfurt, after years of campaigning, the referees' association last month finally persuaded the Hessen soccer association to let them know what disciplinary action has been taken against transgressors -- previously, our reports were written, filed and received without so much as an acknowledgment, let alone a thank you.)

The research also pinpoints the need for cultural change to foster more appreciation and empathy for game officials, and that this change should be driven from the top. "The drive for excellence in elite level sport has meant that individuals who play, coach or watch local sport expect the match official to be at the equivalent level [to] those [...] seen on televised sport," the authors write. "Hence, there are unrealistic expectations on match officials at lower levels of sport, and there are also consequences of any televised negative behaviour towards match officials." That is, the high stakes that prompt Jürgen Klopp to explode at the fourth official has a knock-on effect for referees all the way down the sporting chain that the Liverpool coach will never have to deal with, or even know about.

What can be done? Sin bins for dissent in English amateur soccer leagues yielded a 38% drop in bad behaviour in 25 of the 31 leagues trialed, and found favor with players, coaches and referees alike. Another county FA introduced yellow armbands for U18 referees, making coaches and spectators "subject to child safeguarding measures." The report concludes with a 10-point plan that suggests a two-year coaching and mentoring plan for under-age officials; vastly improved disciplinary procedures; better mental health support from governing bodies; campaigns to promote the importance of game officials to increase understanding of their role; microphones on officials (at the elite level); and a 'whole game' approach that introduces all the above measures from the top downward, and across all sports.

Otherwise, as I occasionally remark to rowdy teams of serial moaners, there'll be no one left to referee your games at all. Except that I'm not quite as polite as Webb and his colleagues, who state that their short, accessible and very important work "is an invaluable resource for all students, scholars and national governing bodies of sport with an interest in match officials, sports governance, sport policy, sport management and the sociology of sport." Not to mention, the very future of sport itself.

referees
4 comments about "Searching for solutions to the global problem of referee abuse".
Read more comments >
Next story loading