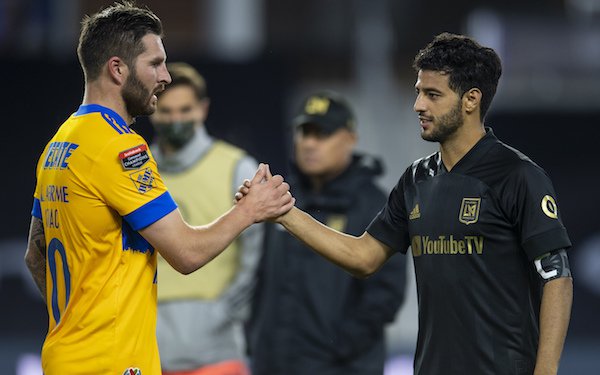 MLS teams came into the 2020 Concacaf Champions League with an 0-3 record in the final.

Mexico's Tigres also lost in its three appearances in the final, all in the previous four years.

Something had to give in Orlando.

LAFC had the Concacaf club championship in its sights, taking a deserved 1-0 lead in the 61st minute on a wonderfully constructed goal finished off by Diego Rossi with a lob over Tigres keeper Nahuel Guzman after a series of 10 passes that begin with a throw-in the LAFC half.

The lead was the latest an MLS team has ever led in the four finals. Real Salt Lake (2011), the Montreal Impact (2015) and Toronto FC (2018) all were even or led at some point in the second legs of their finals with their Mexican opponents but all lost.

Given the soccer it played and the path it took to the final -- wins over a trio of Mexican opponents -- LAFC's 2-1 loss was the most disappointing.

Shortly after Rossi's goal, Carlos Vela had a chance to finish off the game, but his open shot was blocked by a Tigres defender. In the 72nd minute, a Tigres corner kick led to Hugo Ayala's equalizer with glancing header to the far post.

"We're very disappointed," said LAFC coach Bob Bradley. "I thought for 70 minutes we made the game very hard for them. It's a choppy game, it's not always that the football's perfect, but I thought our way of going after them and pushing the game for 70 minutes was quite good and we have a big chance when Mahala [Kwadwo Opoku] beats the defender and cuts the ball to Carlos to go to 2-0. And then we just -- a misunderstanding between Kenneth Vermeer and Eddie Segura leads to a corner, we just don't do well in the front zone. And then Mark-Anthony Kaye has a chance in the back to maybe clear it."

The goal marked the second straight game in which LAFC conceded a goal on a corner kick. But while it recovered from the early goal it conceded against Club America and won, 3-1, in the semifinals, the momentum of the final changed after the equalizer. LAFC's energy sapped, leading to the second goal in the 84th minute.

"You could tell at that point now we start to get a little bit more careless, a little slower to close things down," Bradley said. "We have so many guys back in position and we just don't do a good enough job."

Luis Rodriguez cruised past three LAFC and laid the ball to French star Andre-Pierre Gignac, who slotted the ball home for his tournament-high sixth goal, one more than Vela.

The game was, as Bradley said, choppy with 40 fouls and, amazingly, no cards. But his young team handled the pressure well. Eight LAFC players, including Rossi, the 2020 MLS Young Player of the Year, were 23 years old or younger. Center forward Danny Musovski spent the last two seasons in the USL Championship.

Still, the ending to a long season and long CCL campaign, made longer by the COVID-19 pandemic, was a disappointment for LAFC.

"I thought our way of going after the game tonight was real good and some moments not our sharpest," said Bradley. "But still, the mentality to play in a final and push the game, that's important."