This month's Spanish Super Cup will not be played in Saudi Arabia after all. The four-team tournament -- featuring Real Madrid (LaLiga champions), Barcelona (runner-up), Real Sociedad and Atletico Madrid (both Spanish Cup finalists) -- will instead take place from January 13-17 in the three Andalusian cities of Cordoba, Malaga and Seville. The relocation is for one of the following two reasons:


1. After the 2020 tournament made its debut in Saudi Arabia, the Spanish soccer federation (RFEF), the clubs involved and LaLiga all decided that staging a domestic competition so far away from their support base was an insult to their loyal fans. Players also expressed concern about the kingdom's shocking human rights record and their complicity in helping to bolster the dictatorship's international public image. "I felt guilty playing soccer there knowing that the Saudi government had directly ordered and carried out the brutal execution of Washington Post journalist Jamal Khashoggi," said Barcelona's Lionel Messi. Real striker Karim Benzema was more direct: "How can we play games in a country where dissent is crushed, migrant workers are treated like slaves, and Crown Prince Mohammed bin Salman uses celebrities and high profile sports events to whitewash his regime's consistently atrocious treatment of dissidents, including jail and torture? I and my fellow players will not tolerate it. We refuse to play in Riyadh."

2. The tournament was moved to Spain for one year only because of Covid-19. It will resume next year in Saudi Arabia. The €120 million ($148 million) contract has been extended by a year to make up for this year's relocated competition.

Congratulations to all of you who chose No. 2, although I have a very soft spot for any idealists who chose the first option. One might smile at your naivety. And yet, why is it so fantastical to imagine the two players' quotes as pure fantasy? Why should high-profile sport stars, whose words reach so many, not speak up on issues as fundamental as human rights? It's hardly as if anyone could disagree with either of the above fabricated messages. 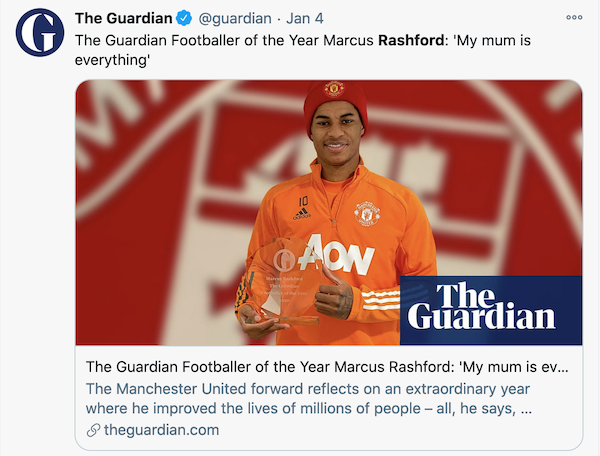 The belief that sports personalities should stay out of politics received another blow this week when Manchester United striker Marcus Rashford was named by UK newspaper The Guardian as its Footballer of the Year. The award is given to a player "who has done something remarkable, whether by overcoming adversity, helping others or setting a sporting example by acting with exceptional honesty." Its winner in 2019 was Megan Rapinoe.

Rashford, like Rapinoe, is not just a thrilling player to watch, but in 2020 he single-handedly took on the British government by shaming the UK Parliament into extending a scheme to provide free meals to children from impoverished families during school holidays. As one of five children raised by a single mother, Rashford knew what it was like to show up at training with an empty stomach. With a calm dignity and persuasive arguments based on his own experience, the player's push for the basic right of every child to be fed won him universal praise, and an MBE from the Queen. And, most important of all, it helped to put meals in front of hundreds of thousands of under-nourished school-age children.

It's true there is a difference between Rashford's defiance of a government in a democratic state where he has the freedom to express himself, and the case of Spanish club players bound by contract to play wherever they're told. Nonetheless, more soccer players should follow the examples of Rashford and Rapinoe in speaking up for what they know to be right. If enough Spanish club players refused to play for the benefit of an autocratic and repressive regime, the RFEF would be forced to cancel its contract with Saudi Arabia. The worst thing that could happen to the players might be a partial reduction in their substantial incomes. Effectively, it would cost them almost nothing, while putting immense pressure on Riyadh.

Next month will also see the staging of the Saudi International, a golf tournament that seeks to attract the top names in the game with vast amounts of cash. Lest you think such events have nothing to do with politics, here's the tournament's website triumphantly announcing that U.S. golfer Tony Finau has joined "a strong list of American players flocking to the Kingdom with World Number One and 2020 Masters Champion Dustin Johnson, 2020 US Open Champion Bryson DeChambeau, five-time Major winner Phil Mickelson and 2018 Masters Champion Patrick Reed already confirmed in the field."

"I’ve heard nothing but positive things from my fellow players about their experiences at the tournament and their visit to the Kingdom," the website quotes Finau as saying. "It should be a great week and I am excited to go." It wasn't immediately clear if Tony will have time off from his busy golfing schedule to visit dissident inmates in Riyadh's Al Ha'ir prison, or a deportation center in the city last month reported to be holding hundreds of migrant workers "in conditions so degrading that they amount to ill-treatment," according to Human Rights Watch.

Yet last year British golfer Rory McIlroy turned down a reported $2.5 million offer to take part in the tournament, saying that as well as not being as "excited" by the tournament as the likes of Finau and Mickelson, "100%, there's a morality [aspect] to it as well." McIlroy added that "you could say that about so many countries, not just Saudi Arabia, but a lot of countries that we play in that there's a reason not to go."

See, it's really not that difficult for privileged players to say and do the right thing. In 2021, we should hope that even more of them will have the courage to stand up and do so.