"Youth is full of sport, age's breath is short/Youth is nimble, age is lame," William Shakespeare  wrote some time ago. He would doubtless have been thrilled at the three-goal performance of Californian 19-year-old Matthew Hoppefor Schalke 04 during Saturday's 4-0 Bundesliga battering of TSG Hoffenheim. You could say that it was a performance for the ages.

It was the victory from nowhere, both for Schalke -- which ended its year-long, 30-game winless streak in the league -- and for Hoppe, who had gathered very poor marks for his first four performances in a Schalke shirt, but gained a '1' (world class) rating from the revered kicker magazine for his deftly taken hat trick. He hadn't done much for the Schalke youth team or the reserves either, as Paul Kennedy pointed out here. Most remarkable stat of all - he scored as many goals in 21 minutes as Schalke's top-scorer, Weston McKennie, managed in the whole of 2020.

It's worth noting that Hoppe would never have been on the field at all if Schalke were not a team in the midst of a sporting and financial crisis. It was Schalke's second coach of this season, Manuel Baum, who called Hoppe and several other reservists into first-team training last fall. Finally, under its fourth coach -- latest appointee Christian Gross -- that move born of desperation paid off. You can call it a gamble, but the club had no other choice. It's out of cash.

Hoppe's fellow striker Mark Uth had demanded that the club make immediate moves on the transfer market after last week's 3-0 defeat at Hertha Berlin, "because the way we played in the second half, we are not capable of competing." This week, its ex-chairman Clemens Tönnies proposed a cash injection to allow the club to make new signings, but two members of the board voted against the move -- the club had promised last year to sever all ties with the disgraced businessman. Tönnies had been forced to resign from Schalke after over-crowded accommodation for poorly compensated foreign workers at his meat-processing plants had lead to severe outbreaks of Covid-19 in the state of North-Rhine Westphalia. In 2019, he had already served a suspension as club chairman after making crass and racist remarks in a speech about climate change.

It's a standard critique of Europe's top clubs that they fail to give players from their own youth system the chance to establish themselves. Hundreds of young academy players end up dropping down the leagues or giving up altogether. Again, money is the issue. Such is the pressure on coaches for short term success (witness again the fact that Schalke are now on their fourth coach of the season, albeit one of them having been an interim fix for just two games), that they cannot take the risk of blooding young players who, naturally enough, need time to adjust to the pace and physicality of first team soccer. The solution to bolstering the roster is almost always to sign a seasoned pro.

Yet the success rate for seasoned pros is probably just as hit and miss as gambling on a young prospect, and a lot more expensive too. In fact, Schalke did sign a seasoned pro this past week, its former defender Sead Kolasinac (27) -- back on loan from Arsenal. And he did make an impact against Hoffenheim too. The difference is, though, that he will cost Schalke €2 million ($2.4 million) in wages until the end of the season.

So, maybe more teams should trust in the players they've been educating. After all, they must have seen something in these lads to have signed them in the first place.

"I know his weaknesses, but I also know his strong points -- exactly this will to score, and his serenity," Hoppe's coach for the Schalke reserves, Gerald Asamoah, writes in today's kicker. He also praises Hoppe's capacity "to keep on developing his own talent. He manages that because he's in a position where he constantly challenges himself." But you can't keep challenging yourself if your club never lets you out of the second team. 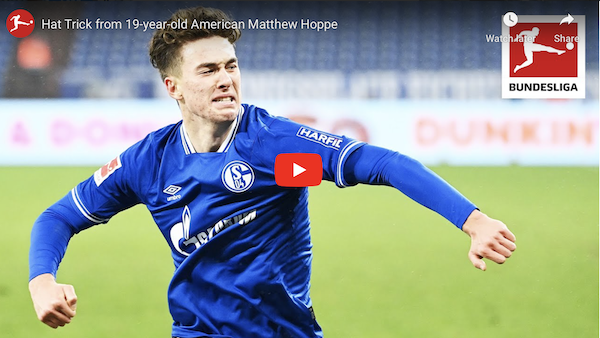 For now, though, let's not focus too much on the negative lest it detract from Hoppe's astonishing performance -- his cleverly timed runs, his cool acuity, his immaculate pacing and placing of his shots. This was top drawer striking in one of the world's best leagues. You can argue that he caught Hoffenheim's defense on a bad day, but earlier this season Hoffenheim beat reigning European champion Bayern Munich, by four goals to one.

And let's most of all celebrate the romance of Hoppe's hat trick. It was not just a display of striking perfection, but the day he chose to execute it, when his club was about to register the equal-worst winless run in Bundesliga history. He became the third youngest player to score a hat trick in the German top flight. And even if he fails to score again in his next 20 appearances, Schalke fans will never forget how he stepped up from obscurity to turn a day of potential woe into one of total sporting joy.

"Youth is hot and bold, age is weak and cold," Shakespeare's poem continues. "Youth is wild, and age is tame/Age, I do abhor thee; youth I do adore thee." Coaches -- please give more young players the time, space and freedom to thrive.