Rethink the typical youth player pathway by replacing the pyramid

Check any soccer club’s website or some of the presentations at the United Soccer Coaches convention, and you’ll see a nifty “pathway” graphic.

At the bottom, you’ll see recreational programs for young players. Then everything narrows as you move upward, through vague words like “select,” “academy” and “elite.” Near the top, you may or may not see “college.” You may or may not see a pro team the club runs or simply a non-specific “pro” tier. At the more grandiose clubs, you’ll see “national team.”

This pathway is the wrong shape.

Let’s say you have 400 U-8 rec players (boys and girls combined) in a given birth year. Then let’s say you send one of those 400 to the national team.

The typical pyramid pathway isn’t even an accurate depiction of the U-8-to-pro pathway. A club that has 400 U-8 rec players likely has only 80-100 travel players at U-9, so the graphic should immediately shrink by 75% from one rung to the next. Then the numbers slowly drop through each age group until maybe 36 -- an 18-player boys team and an 18-player girls team -- finish out their travel soccer careers with the U-19s.

So instead of a pyramid, we’d ideally have a square, with 400 players at age 8 and 400 people involved with the sport at age 19. At least, we’d hope for a trapezoid, with the top only slightly smaller than the bottom.

Or, given the fact that adults will have many more ways to engage with soccer than 4-year-olds do, maybe we should be looking at a baobab, the “upside-down” tree with many branches from which Disney’s Animal Kingdom derives its “tree of life.” Or, if you prefer soccer tactics references to nature, call it an inverted pyramid.

So let’s consider what pathways (branches) would be on the square or baobab model. In this hypothetical, we’re talking about a mid-sized club that plays boys and girls ECNL and occasionally send a player to the pros.

Level 1 (bottom): Preschool programs.
Level 2 (U-6 through U-8): Recreational programs, including TOPSoccer.
Level 3 (U-9 through U-12): 25% travel, 70% recreational, 5% TOPSoccer
Level 4 (U-13 through U-14): The ECNL pathway branches off. The other pathways start to mix. Some players go from travel to rec and vice versa. Some players leave TOPSoccer for general rec.
Level 5 (U-15 through U-19): More tangled branches. Travel and rec also connect to high school. Also, a branch turns up for “referee.”
Level 6 (early adult): The smallest branch is “pro.” Top-level travel and other travel go to “college varsity.” Many branches connect to “college club / intramural,” as well as “adult leagues.”
Top level: A thin branch for “national team” parallel to “pro.” Then we have “player,” “referee,” “coach” and “parent.” Maybe not “journalist.” And they all feed into “supporter.”

This graphic is for parents, first and foremost. But everyone within the club -- every coach, every employee -- should see it as well. It will resonate more deeply than the typical mission statement. 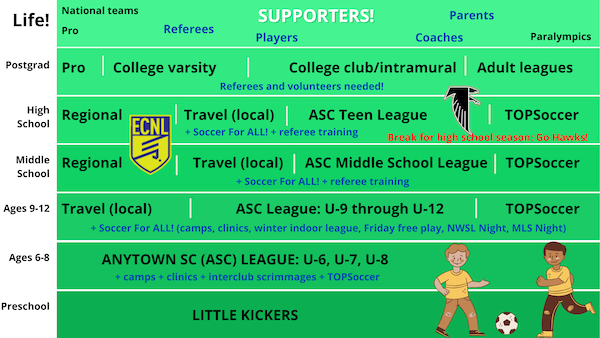 Because your club shouldn’t be focused to the very top of a pyramid that applies only to a handful of people. Your club should be focused on an experience that keeps everyone involved in the sport.

And parents and players should know that before they sign up.