Weekend Focus: Matthew Olosunde's career is trending up but has hit a critical juncture 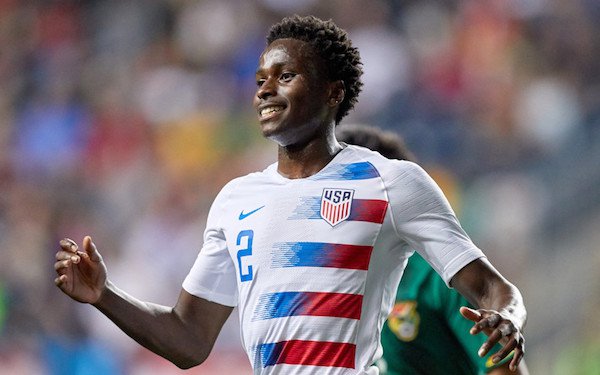 The path to success in European soccer is often not a straight line.

While recent examples of Christian Pulisic, Weston McKennie, Tyler Adams and Gio Reyna sometimes make it seem like success awaits anyone who heads to Europe, these players are typically the exception not the rule. For most young players, there are often many setbacks such as a familiar coach getting fired, injuries, or being forced to drop to a very low league in order to start the path up.

Matthew Olosunde, 22, is a great example of this, and whether or not he is deemed a success is still far from determined. But what is now clear is that his career prospects are better than they have ever been.

Born in Philadelphia but raised in the Trenton, New Jersey, area, Olosunde played for the Princeton Futbol Club but blossomed at the New York Red Bulls Academy as both a right winger and a right back. After succeeding at numerous age levels and even appearing with the second team in the USL, he was selected to play for the United States at the 2015 U-17 World Cup but made just a single appearance at the tournament. He was later not selected to play for the U-20 team during the 2017 cycle.

Upon his return for the U-17 World Cup, Olosunde accepted a contract with Manchester United to play for its youth teams and begin working his way up within the prestigious club. Education was always very important in the Olosunde family and he initially committed to play soccer at Duke University. In order to entice him to join the club, Manchester United also reportedly offered him the opportunity to study at the University of Oxford.

From there, Olosunde began climbing the ranks at Manchester United, at first with the U-18 team and then to the U-23 team for the Premier League 2 campaign. While he trained with the club’s first team and traveled with it at the end of the 2018-19 season, he fell short of a debut with United and was released in June 2019.

"I really enjoyed my time at United," Olosunde told ESPN. "It was a surreal experience to come from America and join a big club like Manchester United. I feel like it helped further my development. Unfortunately I couldn't continue my career there, but you've got to do what you've got to do. I feel like I spent my time there as best I could and it has definitely prepared me for the next step."

From there, he dropped down to third-tier League One with Rotherham United, a far cry from Old Trafford. Olosunde emerged as the starting right back and made 32 appearances with Rotherham in 2019-20. Not only did he make his professional debut that season, but he also oversaw a season where Rotherham United earned promotion to the Championship.

There have continued to be more setbacks for Olosunde, however. He was not in Rotherham United manager Paul Warne’s plans at the beginning of the 2020-21 Championship season. He didn’t even make his first appearance until Oct. 20, and his first start came on Nov. 7 in a 2-1 win over Preston North End.

But Olosunde proved himself well and has been a regular starter since and has three assists in his 12 Championship appearances – which now include seven starts.

Last weekend was the career highlight for Olosunde, who was scored for Rotherham United in a 2-1 overtime loss to Everton in the FA Cup.

Matthew Olosunde is quick to pounce on the loose ball on a mistake from Everton. The right back from NJ evens the game for Rotherham United in the FA Cup pic.twitter.com/UXTEGUXhpm

It wasn’t just his goal against the Premier League team that stood out. Olosunde was a nightmare for Everton to defend and was routinely dangerous on the dribble and solid with his defending.

"I thought there were some amazing performances, and Matt Olosunde got the goal that his deserved,” said Warne. “I thought he was a thorn in their side from start to finish.”

Just as he earned rave reviews for his outing against Everton, challenges and questions await Olosunde. Rotherham is still deep in the relegation zone at 23rd place in the 24-team league. His team has played two or three games fewer than all other teams in the league, so there is more time to climb out of danger. But having lost four of its last five in the league, Rotherham is not playing with the necessary momentum to make a move.

Olosunde is also playing for himself these days. His current contract will expire at the end of June and further strong performances could ensure that he earns offers from clubs that are at least in the Championship level.

Internationally, the road ahead will be challenging for Olosunde. He has one national team cap to his resume – in a 3-0 friendly win over Bolivia in 2018. But the U.S. team has never been more set at right back than it is now with Sergino Dest, DeAndre Yedlin, Reggie Cannon, Bryan Reynolds, Julian Araujo, Kyle Duncan and Tristan Blackmon all now in the mix. The good news for Olosunde, however, is that he also has the benefit of being eligible for the U.S. U-23 team in 2021.

All that talk is still several steps away.

Olosunde has crossed a lot of bridges to get to this point after being released by Manchester United, struggling for playing time at the onset of his first Championship and being passed over for the 2019 U-20 team. That is all behind him now and he is earning positive reviews for his performances at a time when his contract is expiring. He now must keep that up and do everything he can help Rotherham United to avoid relegation.

Olosunde is trending up, but his career is still at a point where he could find a high level of success or drift back into the obscurity of lover levels.

Saturday’s matchup between Rotherham United and Derby County will pit two teams in the Championship’s relegation zone against each other. It might be a lower level, but these are the types of games that could have a big impact as to what is next in Olosunde’s improving career.