The United Soccer Coaches convention is always a beehive of activity, with classes and exhibits providing a backdrop for informal interactions between coaches, club execs, journalists and vendors.

Funny thing about beehives -- you can’t really replace them with Zoom meetings.

But United Soccer Coaches was up to the challenge, and given the conditions in California at the moment, the organization certainly made the right call by scrubbing its plans to convene in Anaheim. Call the 2021 convention what you like, but at least it’s not a superspreader event. 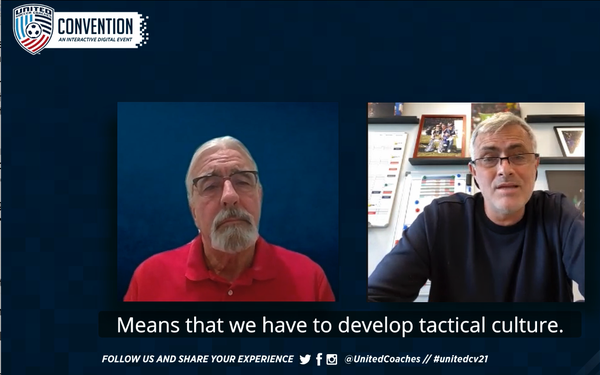 And some of the aspects of the laptop-based convention were so well-received that United Soccer Coaches (which still needs an abbreviation, and “USC” is claimed by colleges in California and South Carolina) should consider carrying them over in future years.

Chief among them: Sessions with coaches who ordinarily can’t travel to the USA in the middle of their seasons, such as Jose Mourinho and Emma Hayes, who joined with her Chelsea assistant Denise Reddy to give a free-wheeling training session in which they interacted with the live chat room and created an atmosphere that felt like a Zoom chat with a couple of friends.

“It allowed members from around the world to have access to presenters that often they may not be able to have access to first hand,” said Haley Carter, a former Marine and NWSL player who has now coached everywhere from Afghanistan to Antigua. “I hope to see a combination of virtual and in-person features for future conventions because I believe it really improved accessibility for so many members.”

“While you cannot replicate the joy of meeting up with colleagues and friends in person, United Soccer Coaches has done a fantastic job organizing a virtual event that was beneficial to coaching education for anyone who registered,” Crooks said. “I probably don’t have the chance to chat for 45 minutes with Gregg Berhalter if he has to fly in from Chicago just ahead of January camp. And that’s something to take away from this year -- a chance to have a more wide-ranging group of presenters whether they are in person or in a Zoom chat.”

The event still had a few hiccups. The platform, produced by a company called Pathable, was robust but occasionally glitched when incorporating Zoom for video meetings. Chats and messaging functions were confusing.

Within a session, the chat feature worked well. Session-goers could debate in real time the merits of Hayes’ insistence that coaches should quit using “unlucky” to describe missed shots and simply demand better from their strikers. Hayes and Reddy perused the chat while they were presenting, setting in motion a candid group conversation that the typical in-person convention session simply doesn’t have.

Outside a session, messaging other convention-goers could’ve been smoother. A bell icon at the upper right of the screen alerted users to incoming messages, but checking that message meant closing out of whatever session or meeting you were attending, unless you opened a new tab and risked a crash.

Communication shortcomings also hindered the virtual exhibit hall. In fairness, that’s the toughest part of the convention to replicate. A typical convention exhibit hall is a teeming mass of humanity that’s part gadgetry showcase and part party. The virtual exhibit hall consisted of a “booth” for each exhibitor -- a mini-site from which each exhibitor should give descriptions, links and embedded YouTube videos -- that offered an integrated “video meeting” function.

That approach ran into a couple of problems. First, the interface offered separate “conversation” and “chat” functions, and it wasn’t easy to distinguish the two. Nor did exhibitors get a notification when someone joined those conversations.

Second, the video meeting function was hardly used in a lot of booths, even with the convention schedulers clearing out two hours each afternoon so that no sessions conflicted with the exhibitors’ time. By Friday, most booths were no longer staffed -- I tried “Join Video Meeting” at several booths and only connected with a live person at two of them.

It’s hard to blame the vendors for abandoning their booths. Sitting around for two hours waiting for people to “stop by” can be dreary, though I put the time to good use by exercising and practicing bass and guitar. Can’t do that at an in-person convention -- musical instruments are a bad idea in a crowded exhibit hall, and doing planks in a hallway would make a lot of people trip over you.

The good news was that Pathable kept a log of everyone who visited each booth, from which vendors could export a spreadsheet. So if you stopped by the Soccer Site Doctor booth, expect an email this week.

And leaving a digital calling card isn’t a bad way to start a conversation.

“I was honestly wondering how close it could possibly be to the in-person experience and I think outside of actually seeing people in the hallways of the convention hall, it came pretty close,” said Yael Averbuch, a former player whose Techne Futbol training business is popular in the virtual and real-life realms. “As a business-owner trying to connect with people to start real, meaningful conversations, I actually found it easier in the digital space than it sometimes is in person.”

So United Soccer Coaches surely learned a lot from these unfortunate circumstances. A hybrid approach, with Hayes and Mourinho beamed in from England and easy communications on an app, could make a vital annual event even better.

“Obviously I hope that next year can be back to ‘normal,’ but I really enjoyed and valued the experience this year,” Averbuch said.

This convention is never really “normal.” It’s the world’s largest exhibition of people in track suits, for one thing. It’s a quirky, overwhelming event in the best possible sense.

Each year, I’ve come away from the convention reenergized to get back out and write, coach and referee. This year, as strange as it was, was no different. Maybe more so, because this year, we were all able to get some sleep in our own beds.

But next year, we want Kansas City barbecue.