Sam Mewis scored a hat trick and her sister Kristie Mewis came off the bench to score in her second straight U.S. game. The 21-year-old Catarina Macario, who recently left Stanford to sign with the world's greatest women's club team, Lyon, made her U.S. debut after coming in at halftime. Veterans Megan Rapinoe and Carli Lloyd returned to U.S. action for the first time in 10 months. But the Colombians played so meekly that Coach Vlatko Andonovski can probably make better evaluations on picking an Olympic roster from intrasquad scrimmages and might be concerned about the finishing ability of his team, which outshot the visitors 22-0 in the 4-0 win. 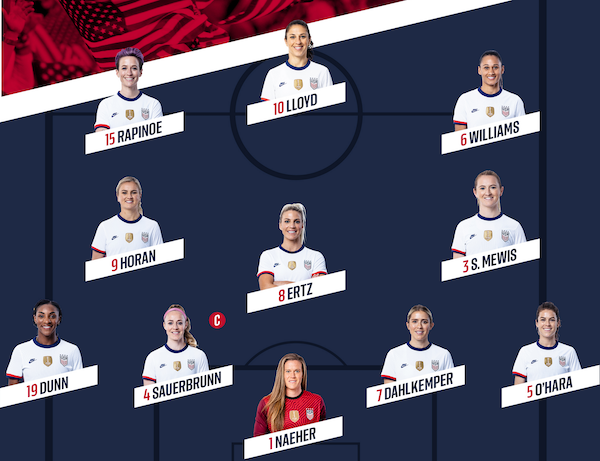 Not fielding a goalkeeper would not have affected the result of this game. Alyssa Naeher may never have had less to do during a game.

With the Colombians' attacks breaking down before they left their own half, the chance for U.S. backline players to impress was offensively. Among the four, Abby Dahlkemper stood out. Her flawless passing at all ranges included a cross-field ball to Lindsey Horan that helped create the first goal and long-range ball that Sam Mewis relayed to Horan before she was fouled the penalty kick that made it 3-0. Becky Sauerbrunn, who was honored with the captaincy before the game, contributed to the USA's 64% possession but with hardly any pressure from the Colombians. Outside backs Crystal Dunn and Kelley O’Hara were allowed to attack at will but lacked the creativity to unlock Colombia's crowded defense.

All three midfielders kept the Colombians in their own half and contributed offensively. The most defensive of the three, Julie Ertz, fed Lindsey Horan before her cross on the second goal. Horan delivered a well-timed through pass to Megan Rapinoe ahead of the first goal and was fouled for the penalty kick. The only thing missing from Horan's game was accurate shooting. She missed twice by wide margins and shot straight to the keeper. Sam Mewis notched a hat trick -- with a low 14-yard low shot, a header from two yards, and a penalty kick.

Winger Megan Rapinoe assisted on the first goal with a crisp low pass to Sam Mewis. Rapinoe was also part of the sequence that led to the second goal -- a close-range header by Mewis after Carli Lloyd nodded the ball across the goal area. Lloyd, after skipping past a feeble tackle from Jorelyn Carabali, also assisted on Kristie Mewis' goal by wisely crossing low. Lloyd sent four headers to Colombia's goalkeeper and one over the crossbar. With unsuccessful shots from Rapinoe and Lynn Williams, that meant the U.S. frontline failed to score against the woeful Colombians.

Catarina Macario won a corner kick with a deflected shot after smoothly evading Colombian defenders. She won balls roaming behind the frontline and sent a pass to Lloyd on the wing on the 4-0 scoring sequence. Kristie Mewis finished from seven yards with a left-footed volley into the corner.

NOTABLE: The USA had won five of its six previous meetings with Colombia, which tied the USA, 2-2, in group play at the 2016 Olympics.