Ref watch: Adjusting to the electronic whistle requires some practice

Nearly a year ago, it would have been much better if epidemiologists and politicians told us that they did not know all that the Covid-19 is about but this is their best guesstimate on what to do, which will require everybody to change their lives.

Instead, we received info that was sometimes incorrect. In my humble opinion, the biggest error was saying that wearing masks does not prevent the spread of the virus. In March and April, New York became Ground Zero for the virus and things started to become much better after the guidelines changed and we were told to wear masks.

Soccer games here resumed last summer although not every group is playing. I attended a Zoom clinic about how to socially distant from players as a referee and I generally did not come within two meters of players after I put the advice into practice. So I was comfortable enough to ref without a mask.

Yet 5% of the refs that I watched wore a mask and used an electronic whistle.

I wore a mask as AR since that position is more precise, being in line with the second-to-last defender (the first defender is almost always the goalkeeper) or the ball, whichever is closer to the goal line. So I was sometimes around players, such as corner kicks on my side, throw-ins by a defender in his defensive half or substitutes standing by the touchline waiting to go into game.

I’m in touch with many referees and have not heard any say that he or she contracted the virus through officiating. With some, soccer games have not resumed in their state. With virus transmission more likely indoors, there is very little indoor soccer in New York this winter. And I have declined to officiate when I felt groups were not adhering to U.S. Soccer’s indoor guidelines. 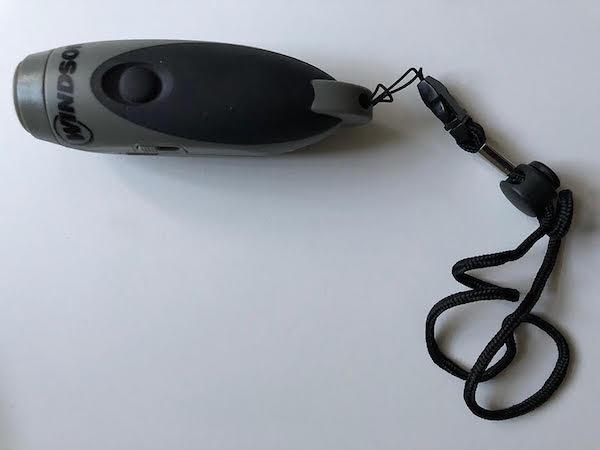 With those groups that complied, I’m still a bit concerned about indoor transmission so I wear a mask and use an electronic whistle. A colleague of mine who refereed an indoor tournament with an electronic whistle reported that he blew the whistle too quickly as his finger was on the trigger, not like a whistle you blow that a ref has to raise to the mouth. He literally blew a call in whistling a foul where he should have played the advantage clause.

To get used to the electronic whistle, I “refereed” a professional game that I was watching on TV, reminding myself to delay triggering the whistle.

For guidelines and best practices for WHEN AND IF your local authorities have deemed it safe to return to the play, check out U.S. Soccer's PLAY ON home page HERE. For U.S. Soccer's pandemic-related FAQs for referees, go HERE.

When it came my time to ref with an electronic whistle, on my first decision I mistakenly tried to raise the electronic whistle to my mouth out of habit. After that I was OK as long as I reminded myself about the delay -- much like an AR often has to delay, delay, delay raising the flag for a player in an offside position.

Any mistakes that I made were not due to the electronic whistle.

The best refs practice the art of making the whistle speak for them, in part by blowing it for an extended period of time for a major decision, such as a PK, disallowed goal, caution or sendoff. With the electronic version, you keep your finger on the trigger longer to do this. Yet I don’t believe the desired effect is the same, that something serious is happening, as the electronic whistle sounds like a cricket chirping.