For many involved with the U.S. men’s national team, their Dec. 9 friendly victory over El Salvador, which the USA dominated, 6-0, was an affirmation that the team was headed in the right direction after the still-shocking elimination of the squad from the 2018 World Cup. 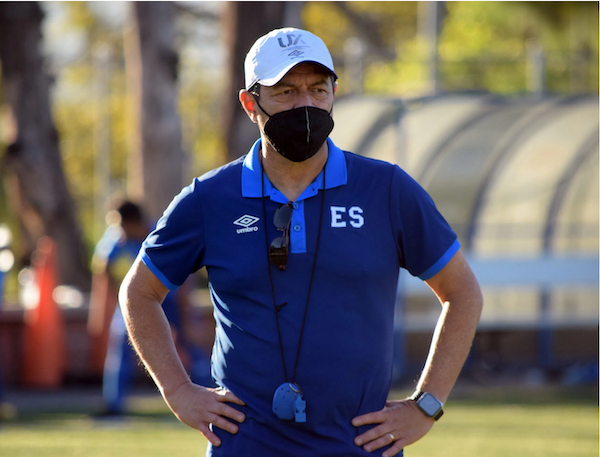 For one former U.S. player and coach, though, the game was a painful experience that ultimately led to a life change. Salvadoran-born Hugo Perez, who came to the USA at 11 and eventually earned 73 caps and scored 16 goals with the U.S. national team in 1984-1994, found it painful to watch his birth country’s defeat. “When I saw them get humiliated, it hurt,” Perez explained. “I’m Salvadoran. That’s why I listened to their offer. I hope I can help.”

El Salvador offered Perez the opportunity to coach its U-23 national team. The main competition for that level is the Olympics. It’s a daunting challenge. The Salvadoran team has qualified for the Olympic tournament only once, the 1968 Games in Mexico.

Yet Perez has reasons to believe he can make a difference. After all, he helped the USA develop some of the top current talents the U.S. national team has now, though he remains modest about his contribution during his years as a U.S. Soccer scout and coach:

“I worked with the USA for eight years. Tim Weah, Tyler Adams, [Weston] McKennie, [Christian] Pulisic, we worked with them in the U-14, U-15 teams. It’s a great feeling, first of all, to see them do well. Thank God we were not wrong. It was an important step that they were picked to the national team at that point. We helped them to be what they are now, in terms of being free to play the way we wanted them to play. They continued to develop once they left us.”

While numerous U.S. fans are excited by the wave of national team talent on the rise, featuring numerous prospects in addition to the ones he helped mentor, Perez has a distinctive insight on how other Concacaf powers rate. Since October of 2019, Perez has worked as a scout for Mexico’s national team program, identifying dual-national players in the USA eligible for El Tri. His time with the Mexico soccer federation left him impressed.

“After working with [Mexico] for a year, for what I saw with them, they’re very strong in every facet of their program -- the youth level, the senior level,” Perez said. “The vision, their programs, they’re all excellent.”

For Perez, what the USA team has at present is potential, which isn’t the same as Mexico’s proven results, especially considering that in November Mexico broke into the top 10 of the FIFA rankings after a nine-year absence.

“Mexico, they’re the best [in Concacaf] right now,” Perez concluded. “But USA players are young and that’s good for the future.”

Perez, from personal experience, can relate somewhat to certain current young USA players, like Pulisic, who were crushed to miss out on the most recent World Cup. On May 31, 1985, Perez was a 21-year-old scoring star for the USA trying to help the team to a spot in the 1986 World Cup. All the Americans needed in their home game against Costa Rica to advance to the final round of qualifying was a tie, but they were eliminated by falling short by a single goal, just as the USA would 32 years later against Trinidad & Tobago.

“With the U.S., it had been 40 years [of missing the World Cup] before we qualified in 1990,” recalled Perez. “Then we started qualifying every World Cup year, until the last one.” 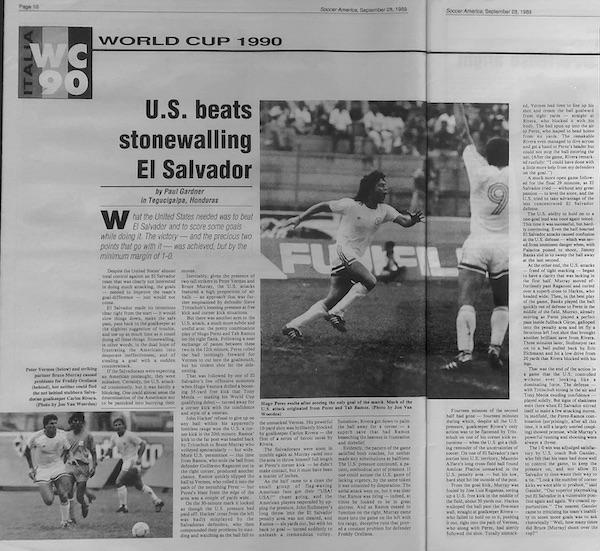 Hugo Perez's goal in the USA's 1-0 win over El Salvador -- played in Honduras because of crowd trouble during a qualifier against Costa Rica in San Salvador -- proved crucial in the USA's successful qualifying campaign for the 1990 World Cup. Hall of Famer Perez also played a crucial role in qualifying for the 1988 Olympics, and he played in the 1984 Olympics and 1994 World Cup.

As much as Perez believes the current generation of USA players is immensely talented, he cautioned about anyone taking regional qualification for granted.

“Concacaf is a different animal,” observed Perez. “Players may be in top teams, but when you come back to play games in this region, it takes more than just talent to win games. You know the example -- the USA didn’t make the last World Cup, getting eliminated by a Caribbean country. That tells you it's a hard region to qualify. The USA has a good group coming up. They’re potentially going to be very good. I wouldn’t be surprised if the USA does get it right with the players they have; they could be a challenging team in a World Cup. But it’s a process. There’s a long way to go.”

As the Olympics have been postponed to July 2021, Concacaf recently announced that the men's Olympic qualifiers will take place from March 18-30 in Guadalajara, Mexico. Perez knows from his initial preparation steps with the Salvadorian Olympic team, other squads in Concacaf are improving. He certainly doesn’t take any of the opponents in El Salvador’s qualifying group lightly.

“Canada has a good team, very well prepared, with most players in MLS,” Perez said. “Haiti, some of those players play in Europe. The other team in our group, Honduras, has been to World Cups.”

Since the Olympics became a U-23 tournament in 1992, the USA has qualified for four of the seven tournaments, and earning a fourth-place finish in the Sydney 2000 Games. It failed to qualify for the last two Olympic cycles despite hosting the qualifying tournament both times. This year, the USA’s Olympic qualifying group consists of host Mexico, Costa Rica and the Dominican Republic. The top two finishers in the qualifying groups advance to the knockout stage and the semifinal winners advance to the Olympic tournament. 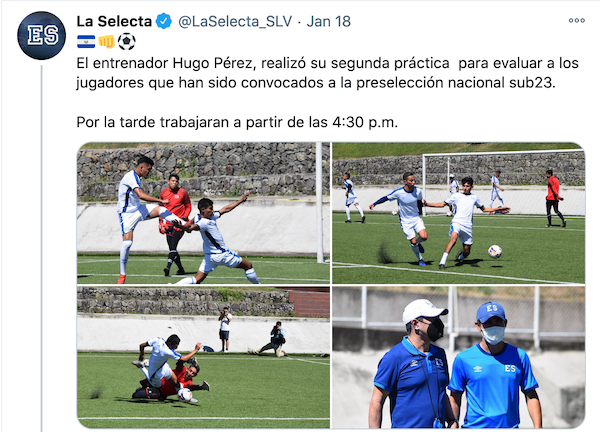 Perez believes in El Salvador’s chances to upset more established teams in Concacaf enough that he has put his job with Mexico aside to approach his current task in full giant-killer mode.

“I had to contact the Mexico federation and explain the situation and terminate my contract with them, because if we get to the second round, then we have to possibly play Mexico.” Perez said, mentioning things may get reevaluated after the qualifying tournament ends.

Perez has a vision to revamp El Salvador’s program that focuses on integrating youth immediately to the national team.

“For El Salvador to have players compete at a high level, they’ve going to have to have players who are younger contribute to the national team,” Perez noted. “You want this program to be competing more frequently at more levels.”

Not only does Perez envision a more comprehensive national program for El Salvador which includes competitive youth squads beginning at the U-14 level, but he also wants to improve the mentality of the players.

“We have to be courageous and think, with all these good teams that we’re playing against, that we can win and about how we want to play and not just about how they play,” Perez said.

He is also encouraged by new options to the Salvadoran side from the USA, including Eric Calvillo, a player for the San Jose Earthquakes who committed this month to play for El Salvador. 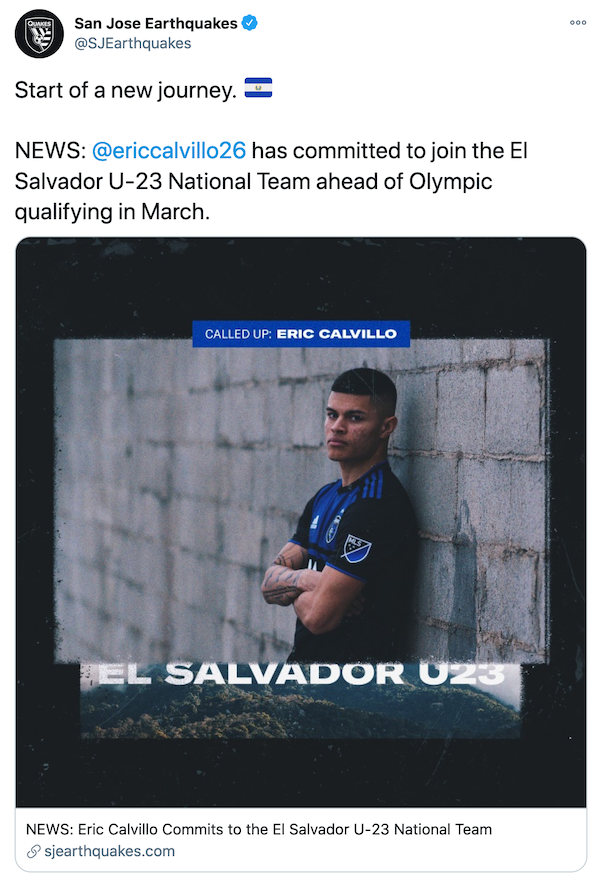 “That will be an important addition for us,” Perez said. “You’re getting players who have developed differently. El Salvador has players who are technical, creative, but you need to add the other facets of a player.”

One element Perez wants to foster among his players is the willing spirit that battles against long odds, unintimidated. El Salvador has never qualified for the U-17 World Cup, reached the U-20 World Cup only once (in 2013) and hasn’t been to the World Cup since 1982, but Perez doesn't want his players overawed.

“We need to change the mentality here,” said Perez. “It’s going to be so effective, to get players from elsewhere to join in with the ones who are here, to change that mentality and make history.”

Any dual-national with options should consider them carefully, Perez said, noting that presently, the USA senior team ranks of Latino players are, in contrast to the youth-level teams, rather sparse:

“When I’ve spoken to families and players, I tell them, ‘Make good choices.’ You have to think about which coach likes your style of play, or they never make it to the senior national team. Do what your heart tells you to do and be at peace about it. I was supposed to play for El Salvador, but they didn’t give me the chance. The U.S. gave me a chance.” 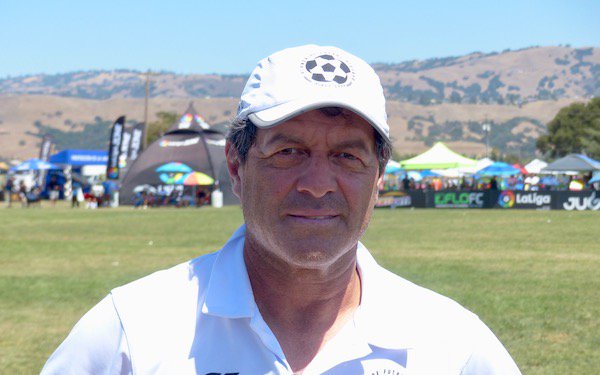 It’s also not as if Perez is turning his back on developing players in the USA, either. He remains director of coaching and also coaches two teams in the Silicon Valley SA, though many of their activities this past year have been curtailed due to the pandemic.

“Any time the coach of a youth program becomes a national team coach, but then goes back to their academy program, it says a lot,” Perez explained. “They become coaches who are gaining a lot of experience internationally and they bring that into their academies and help their players grow and perhaps one day become part of national teams as well.”

It would be a shock for some to see El Salvador triumph in the goal of qualifying to the Olympics, but Perez isn’t fazed by the challenge. He also knows it would be far from the biggest shocking event the Concacaf region has seen of late.

“We have a long way to go in El Salvador,” he said. “But who would have thought the U.S. wouldn’t make the World Cup? Mexico has also been close a few times to not qualifying [for the World Cup]. I wouldn’t be surprised if in the upcoming rounds there was a surprise and in the last round of qualifiers, it will become hard for either Mexico or the USA to qualify.”