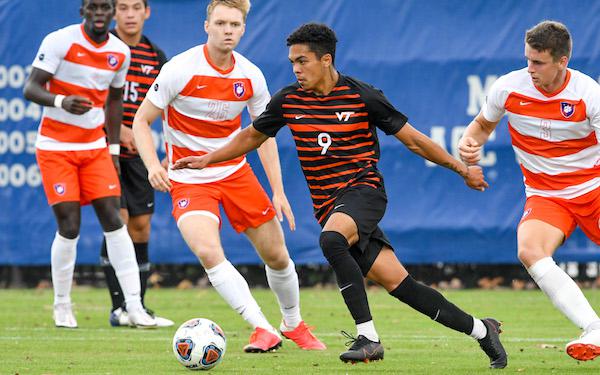 Daniel Pereira, the No. 1 pick in Thursday's MLS SuperDraft, knew nothing about the soccer scene when he arrived in Virginia from Venezuela with his family in July 2015.

Pereira made the varsity as a freshman at Roanoke's Northside High School, an accomplishment that impressed his friends but meant nothing to him. Varsity? JV? He didn't know the difference.

College? "I was just getting used to the system, like the whole high school thing," he said, "and I didn't even know what college was."

The move from Venezuela to escape the violence was difficult.

"It was crazy times," he said. "Venezuela wasn't in a good spot, and my parents knew it was going to get worse. We decided to move to the U.S., trying to look for something better, a better life for me. They pretty much moved here for me. It is one of the biggest sacrifices my parents have done for me, and I appreciate them for that every day. And knowing that it's paid off now, it's beautiful, but it was crazy times."

Austin FC's first pick says he was helped along the way.

"My first year was really tough in high school," Pereira said, "because I didn't know English, but I surrounded myself with good people, teachers, friends, and I think that's why I'm where I'm at today."

In the spring of 2019, he led Northside to the Virginia High School League's Class 3 championship in its first appearance in the state tournament in 11 years and was named the VHSL Player of the Year. Then, he was off to college.

Because he did not come from a Development Academy program -- he played for Roanoke-based Virginia Blue Ridge Star -- Pereira was not on the radar of MLS scouts in 2019 when he enrolled at Virginia Tech, but that quickly changed after he made the league's all-freshman team with five goals and five assists for the Hokies.

"I like experiencing new things, so I think that was a good thing that I experienced," he said. "And then in college, I never thought I'd be a pro. It was my goal, but I just always kept grinding, kept putting the work in and it's paying off for now."

Pereira, who describes himself as a box-to-box midfielder, didn't know he'd be taken with the No. 1 pick -- he figured Kenyan Philip Mayaka from ACC rival Clemson would be the top pick -- but he impressed Austin FC head coach Josh Wolff.

“Danny is a very good player and has good potential," Wolff said. "He plays a number of positions in the midfield, he’s very comfortable between lines. We’ve picked up a player who is ready to come in and play in MLS but also has room to grow. He’s a hungry, humble player.”

Thursday was a big day for Roanoke soccer, the biggest since Danny Karbassiyoon was signed out by Arsenal out of Northside High School in 2003. Irakoze Donasiyano, who played club soccer with Pereira and attended Virginia, was selected by Nashville SC with the No. 20 pick, making Roanoke the only city to have two players taken in the first round of the SuperDraft.

It was an especially big day for Pereira's family. They joined his high school and club coaches in driving to Blacksburg to be with him and his Hokie soccer family watching the draft show at a suite at Lane Stadium, Virginia Tech's football stadium. He said his father was crying before the draft even began and described his selection as an accomplishment for his family "believing the American dream."

"It's an honor," he said on an MLS media call right afterwards. "I'm happy, real happy. My parents are crying. It's a moment I'll never forget."

Pereira might not have known much about American soccer when he arrived from Venezuela in 2015, but he certainly does now, thanking Austin FC sporting director Claudio Reyna and Wolff, teammates on the 2002 U.S. World Cup quarterfinal team, for his selection.

"Knowing that I got picked by some legends," he said, "it's a lot of responsibility I'm ready to take on. I can't wait to get started."