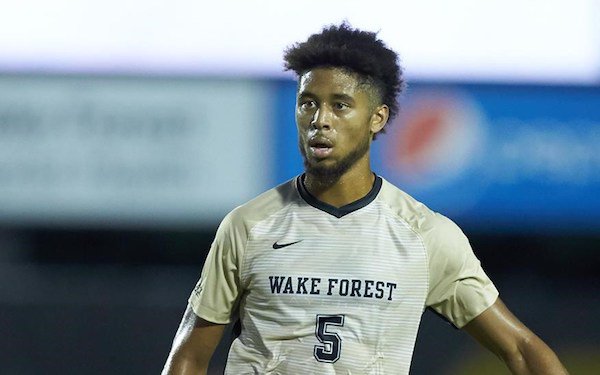 Players from ACC teams dominated the 2021 MLS SuperDraft, which should come as no surprise since the ACC was the only major men's conference to play in the fall.

ACC players went with the top five picks, beginning with Virginia Tech's Daniel Pereira, taken by Austin FC at No. 1.

Wake Forest’s Calvin Harris (FC Cincinnati) and Michael DeShields (photo, D.C. United) went at No. 2 and No. 5 and Clemson's Philip Mayaka (Colorado) and Kimarni Smith (D.C. United) were the No. 3 and No. 4 picks.

The ACC had 12 first-round selections -- the most ever by one conference -- and 25 picks overall -- one-third of the 75 total draft picks.

Foreign influence. The first four selections in the 2021 SuperDraft were all born outside the USA: Pereira (Venezuela), Harris and Smith (both born in England) and Mayaka (Kenyan native).

Players from 15 different countries besides the United States and Canada were picked during the draft, including six African countries with selections in the first round.

Guadeloupe international Luther Archimede, taken by the New York Red Bulls with the No. 13 pick, played for French second division Sochaux before he enrolled at Syracuse University.

USL picks. What was new about the 2021 SuperDraft was that besides players who are college seniors or Generation adidas underclassmen, teams picked players who played college soccer in 2019 as seniors or underclassmen and turned pro with teams in the USL Championship or USL League One since then.