Four days after a 4-0 win over the Colombians, Coach Vlatko Andonovski's seven changes to the starting lineup included an entirely different backline and, most importantly, the exciting Catarina Macario at center forward. The 21-year-old scored quickly and in her 63-minute stint provided plenty of reasons why she should always start. Next up after the 6-0 win, as Andonovski figures out how pare down the Olympic roster to 18, are Canada, Brazil and Japan in the SheBelieves Cup (Feb. 18-24). They will provide desperately needed competition for the U.S. team that outshot Colombia 33-2 on Friday. 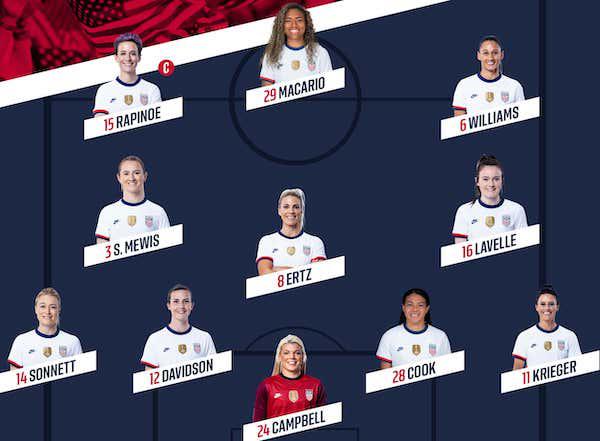 One feels sorry U.S. goalkeepers in these lopsided friendlies. Jane Campbell saw her first action since April 2018 and didn't get a chance to make a save.

Ali Krieger assisted on the first goal and Emily Sonnett helped set up the second goal in a game in which U.S. defenders were free to spend as much time in Colombia territory as they pleased. Sonnett also set up Lynn Williams for a clear 33rd-minute chance. Alana Cook kicked a ball out of bounds that she should have settled and Tierna Davidson hit a sloppy crossfield pass in the first half that could've been trouble against a decent opponent. Cook did block one of Colombia's two shots and Davidson found her groove. Her passes included a long ball out of the back that set up another Williams chance.

Rose Lavelle shot high and wide twice in the game's first two minutes and had a shot blocked inside the penalty area in the 20th minute. Yet Lavelle's playmaking tortured the Colombians, and despite her misses her dynamism unsettled the Colombians from the get-go. Lavelle was part of the buildup to the USA's first two goals. In the second half, she finally tested the keeper. Sam Mewis, coming off her hat trick, played a more subdued role but was fouled for the penalty kick (3-0) and delivered the cross for Lynn Williams' goal (4-0). Mewis should have been on the scoresheet, but headed onto the post from two yards out. Julie Ertz did her usual: preventing pressure on the backline and efficiently spraying passes after the USA won the ball.

Catarina Macario, who debuted with a second-half appearance earlier this week, got the start and scored before the third-minute mark, coolly banging home from five yards a Krieger cross. Later in the first half, Macario hit the post and forced a good diving save with long-range shots. She seemed always available for a pass, laid off several good balls, and in the 49th sparked an attack with a run from the midfield line. Perhaps most impressively, she can play effectively amid an overcrowded defense, which the USA faces constantly. Lynn Williams shot wide on a close-range chance and failed to lob keeper Sandra Sepulvada in a one-on-one. Her header, however, to make it 4-0, was perfectly timed and placed. The value of Megan Rapinoe's composure was demonstrated before she unleashed the deflected shot on the second U.S. goal and when she buried the penalty kick. It will be interesting to see how the 35-year-old fares against tougher foes in February, but besides a horrible taken corner kick, she looks fit and sharp.

Midge Purce scored her first national team goal, heading in what looked like a shot from Carli Lloyd, who replaced Macario in the 63rd minute. Lindsey Horan finished with a nifty, low close-range volley off a Crystal Dunn corner kick.

NOTABLE: The four Colombian players who missed Monday's game because of Covid protocol were cleared for Friday's game. Three had tested negative and one had an inconclusive test before the Monday game, but were kept out because of contact-tracing to a delegation staff member who had tested positive.