It has been a big month already in American soccer by way of young players standing out in Europe and with a wave of movement in the transfer market. On Sunday, those worlds might collide when one of the top young American players in the game is likely to make his debut with Red Bull Salzburg after transferring from the Philadelphia Union during the MLS offseason. 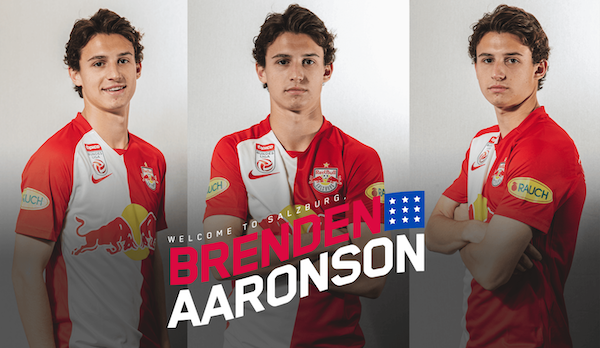 Brenden Aaronson, 20, was a product of the Philadelphia Union’s academy which he joined in 2015 while still in high school. He developed through all levels of the organization before joining the first team ahead of the 2019 MLS season. That year began with disappointment as he wasn’t chosen cut for the United States U-20 World Cup team but gradually assumed a starting role with the Union.

By all measures, the true story of Aaronson’s development came in 2020 when he not only avoided a sophomore slump but managed to show remarkable growth as a player. Physically he put on muscle to make him stronger and he was now able to easily play 90 minutes and make impacts throughout the entire game. That strength allowed his technical ability to shine even further. He also earned the trust of Coach Jim Curtin who began giving more and more responsibilities to Aaronson.

That trust was rewarded with Aaronson helping to guide the Philadelphia Union to the Supporters Shield for its first ever trophy. For his efforts, Aaronson was awarded by being named to the league’s Best XI for the 2020 season.

In the fall, it was announced that Aaronson would be sold to Red Bull Salzburg at the conclusion of the 2020 MLS season. After participating in a December camp with the United States national team where he scored one goal in a 6-0 win over El Salvador, Aaronson arrived in Austria just after the start of the new year.

"When I heard that Salzburg were interested I thought that it would be really eye-opening for me," Aaronson said upon his arrival. "It was a club that kind of stood out to me. I can see myself being part of the philosophy of soccer here. Salzburg plays fast, direct and attacking soccer. That’s what I like to do, and I think that this just fits my profile really well. I wanted to join a club where I think I can come in and do well. I want to work day in, day out and improve day in, day out."

Initial impressions for Aaronson have been strong. Last week, he started, scored and assisted in his first friendly for Red Bull Salzburg - which was a 6-0 win over second-tier Vorwarts Steyr.


This transfer is one of the most intriguing for young American players because it gives Aaronson the opportunity to play for a club that has developed elite talent on a regular basis the past few years and it will allow him to play under American coach Jesse Marsch. As a former coach of the New York Red Bulls, Marsch was well familiar with Aaronson’s past, his strengths as a player, and the environment in MLS where he developed.

“I think he's gotten better and better with each game,” Marsch said. “I think he understands our philosophy of football. He's very aggressive. He runs all day. He's clever on the ball. He does all the things we like in a player. So we're really excited for him to be a member of our team.”

“In the end, I know he'll do great here,” he added. “He'll come here and he has a great mentality. He's very mature for a young man. He's improved so much over the past few years and I know when he comes here into our environment, he'll get better and better every day.” 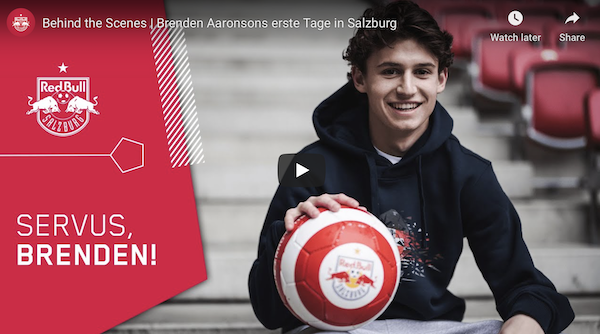 Aaronson will also play at a level where he has a good chance of succeeding. Salzburg is the reigning champion of the Austrian Bundesliga and in 2019/20 the club scored 110 goals and finished with a +76 goal differential after 32 games. But Salzburg is a club that frequently sells players and needs young players to fill that void. Last season, the club sold Erling Haaland to Borussia Dortmund but was able to withstand the loss of one of the world’s best forwards with a steady crop of new players.

This past window, the club sold Dominik Szoboszlai within the Red Bull empire to RB Leipzig and, in doing so, the attacking midfielder became the most expensive Hungarian player ever. Now Marsch and the club will be looking to Aaronson to fill that huge void. The expectation is that Aaronson will join the next crop of very talented players that will allow Salzburg to contend for the Austrian Bundesliga and perhaps be sold in a few years.

The race for the Austrian Bundesliga title this year is tight. Heading into this weekend, Salzburg sits in second place, two points behind Rapid Vienna – which won on Friday. Salzburg, however, has played one fewer game and can retake first place on Sunday.

The pressure will indeed be on Aaronson and his teammates when they face a poor Altach club that is second to last and has just eight points from 12 games.

It will mark a new chapter in Aaronson’s career and one that could yield even more silverware, accolades, and bring about another transfer if he plays well.