Phil Neville: 'I've had to adapt to different situations' 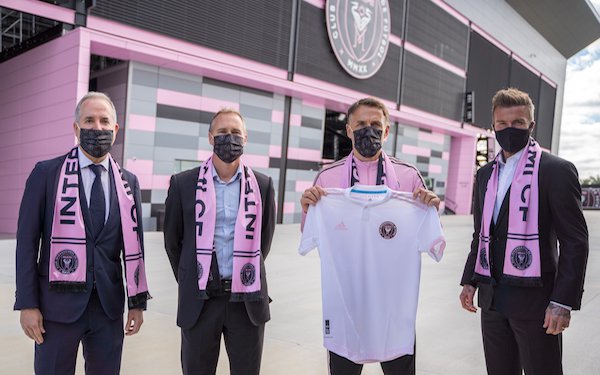 Inter Miami held its first press conference since it hired Phil Neville as its new head coach and longtime Seattle Sounders executive Chris Henderson as chief soccer officer and sporting director, and its owners pushed back on the notion that Neville was only hired because of his long relationship with David Beckham.

Beckham, Inter Miami's founder and co-owner, and Neville go back to their pro debuts at Manchester United during the 1994-95 Premier League season.

"Of course, people are always going to turn around and say, 'Oh, it's because he's your friend.' It's nothing to do with him being my friend," Beckham said on Friday. "Our ownership group don't just employ our friends. We employ the best people, whether it's on the field, off the field, in our backroom staff, the staff that we have work in our training facility, at the stadium. We are running a serious soccer club here. And I think at the end of the day, we hire people that we feel are best suited for the job."

Jorge Mas only joined up with Beckham in the Inter Miami project in late 2017 and now serves as managing director.

“I’ll say it in more direct terms than David: Phil Neville was not handed the Inter Miami job," said Mas, another co-owner. "He earned the job. There was a very thorough interview process, with multiple candidates. As you may imagine, Inter Miami head coaching position is an attractive position. There was interest from coaches all over the globe. We conducted multiple interviews for the job with a myriad of candidates."

Neville, 44, took over as England's women's national team coach in 2018 and led the Three Lionesses to fourth place at the 2019 World Cup, though their poor form after that led to widespread criticism.

Neville, whose coaching background includes work on the staffs at Manchester United and Valencia, where his brother, Gary, was the head coach, admitted the MLS record for foreign coaches without prior experience on the North American scene isn't great.

"The biggest challenge for me as a coach is to come here and and prove to people the foreign coaches can come here and be successful," he said. "There will be things about the travel, etc., and the different time zones that we have to adapt to, as well. But ultimately, I think in my football career, in my short coaching career, I've had to adapt to different situations like travel, like heat, etc."

Neville pointed to the eight weeks he spent observing LA Galaxy practices when Beckham played for Bruce Arena, MLS's most successful coach with five MLS Cup titles, and the Three Lionesses' trips to the SheBelieves Cup in 2018, 2019 and 2020.