The 41-year-old Djorn Buchholz  is pretty good example of how easily someone can fall deeply in love with soccer. Hailing from a small Nebraska town, Buchholz's family had no background in the game. But his aunt served as the executive director of the YMCA in Hastings (population: 25,000). His father started hearing about soccer's growing popularity and decided to introduce it into the YMCA programming. "One of my earliest photographs is me as a little baby with a soccer ball next to me," says Buchholz, who became especially enthralled with the game during the USA-hosted 1994 World Cup. 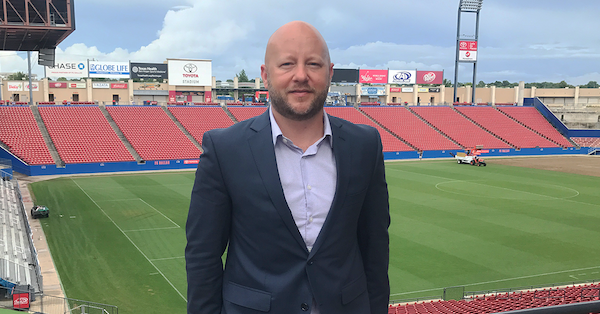 After high school and college soccer at Hastings College, "I realized I wasn't good enough to make it to the next level of playing, so I started to see what opportunities there were on the business side." He started with the Indiana Blast as director of operations/media relations in 2001, moved from general manager of the Minnesota Thunder to the Austin Aztex in 2009, and had stints with Minnesota United, Sporting Kansas City and Louisville City -- and he ran venues in San Antonio and Houston for the Gold Cup and Copa America Centenario.

In 2015, Buchholz heard the National Soccer Hall of Fame, whose Oneonta, New York, venue closed down 2010, would reopen in Frisco, Texas, at FC Dallas' stadium thanks to the efforts of the Hunt Family. He applied for the job and became the NSHOF's executive director in June 2017.

"It's a passion play for me," Buchholz says. "I felt so honored and privileged to have the opportunity to be a part of building a home again for so many players that I grew up admiring and who inspired me to do what I do on a daily basis. It's really been one of the most rewarding things I've ever done."

About a year in a half after Buchholz came on board, the new Hall of Fame museum opened in Frisco. Earlier this year, it revamped its selection process. 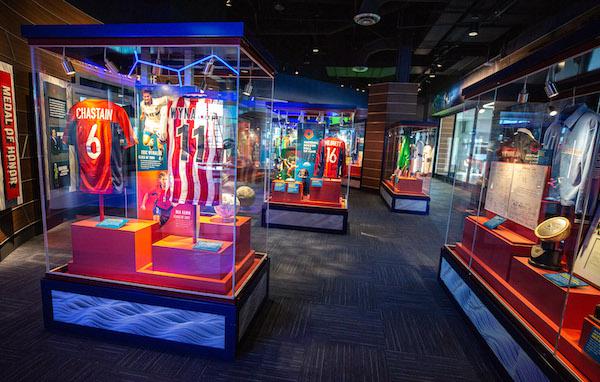 SOCCER AMERICA: Who were the players that inspired you when you were growing up?

DJORN BUCHHOLZ: I was in Nebraska, so we were going to Colorado Rapids games all the time. Marcelo Balboa is certainly one of them. Somebody else I hope gets in the Hall of Fame some day is Carlos Valderrama. From the 1994 World Cup, I can go down the list.

SA: I imagine making a Hall of Fame museum appealing in this day and age must be more challenging than in the past because of the incredibly increased access fans have to soccer history through the Internet. What was the approach to creating a modern Hall of Fame?

DJORN BUCHHOLZ: We wanted to reach all ages. We've got over 400 artifacts inside of the building, but we wanted it to be as technologically advanced as we could. It gets the younger generation in, whether to do a skills challenge or the virtual reality. But it also allows us to update the building on the fly.

For example, we've got an interactive where it's a build your all-time greatest men's or women's national team. Any player who has at least 10 caps for the U.S. national team lives inside of it. One of the cool things we can do is quickly update it. The women played 10 days ago, and the next day one of us goes into the system, updates the stats, so that when somebody comes into the Hall of Fame that day everybody's current.

That CMS [content management system] that runs it updates all of those stats throughout the building where they're relevant. We can be as current as possible without having to tear down a wall or tear down a display. 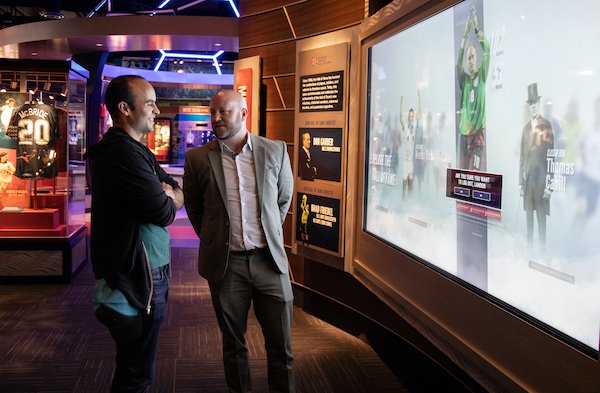 SA: What are the most popular hi-tech parts of the museum?

DJORN BUCHHOLZ: Our virtual reality goalkeeper experience. Unfortunately, it's one of the things we have closed down [because of COVID precautions] right now because it's too much interaction with putting on headsets and things like that. We look forward to opening that up at some point. We've got a skills challenge that uses gesture technology, the Microsoft connect system, so people can shoot on goal, head, juggle. Those have been our two most popular things.

Another thing that really sparks people's attention is our use of facial recognition inside the building, which has never really been done in a space like this before. We take people's photos in the lobby during the registration process and ask them a few questions. Where they're from. Favorite soccer teams in this country. Favorite soccer position. Their fan level. Based on that, there are 13 AVs that recognize them when they walk up to it and get them information we think is going to be most interesting to them. So it's a completely personalized experience, which has been a lot of fun in this project.

SA: Do you often have relatives of Hall of Famers visit?

SA: What sparked the changing of the selection process?

DJORN BUCHHOLZ: After getting the building open in October of 2018, we started to focus in on what wasn't going great with the selection process for induction. We were having small class sizes. One of the issues was there was an overabundance of voters -- over 200 people eligible to vote. On top of that, the lists of candidates were starting to get incredibly large, for players, veterans and builders. You had so many people voting and so many options to choose from, the votes were going all over the place and our threshold was 66.7% of the votes -- and maybe one person was getting there on an annual basis.

There were over 200 people eligible to vote, but not everybody was voting. I think unfortunately some people saw voting as a little bit of a task and maybe filled out their ballot as quickly as they could just to get it submitted by the deadline and didn't really put enough thought into it. I think most most hall of fames have experienced that in some form or fashion. I was reading some articles this morning about issues the hockey one and the baseball one are having.

Our mission is to honor those who have given the greatest contribution to the game in this country and I just don't think we were fulfilling our mission. So it was over a year ago when we started to take a real deep dive and look into this to see how we can make the appropriate changes.

SA: What are the key improvements?

DJORN BUCHHOLZ: Now, we've got actual conversations with individuals who want to be involved in the process. We've got three separate voting committees set up. They are basically a third Hall of Famers, a third media historians, and a third soccer coaches or administrators with U.S. Soccer or first divisional experience.

Within those voting committees, we have smaller groups that are on the screening committees, which have been very active. They're doing their due diligence and whittling these lists down to the numbers that are just more manageable. The player list is going to go from almost 50 individuals to a final 20. The builders list is a hundred people, who will be down to a final 10, and the same with the veterans.

In both the builder and veteran screening calls, there are some players and individuals who will be on that final ballot who I think would've never made it before had those screening calls. I think that's pretty cool about the process.

SA: After the screening committees come up with the final lists, the voters discuss before casting ...

When you take a group like we have that's made up of such a variety and diverse individuals -- not everybody is from the same era. Not everybody remembers certain individuals. It's been fun to watch these people take this on as a responsibility, then have meaningful conversations in which people open up their ears and listen to what certain players or individuals have meant to somebody else for different time. And try to compare that to the people I look up to, the people I remember.

SA: The builder category will be divided into separate groups on an annual rotating basis ... referees, coaches and contributors, and then every fourth year all eligible builders will be voted on. What was reasoning behind creating a rotation?

DJORN BUCHHOLZ: This year all builders are eligible, and next year we'll hone in on the referees. We felt it was important to start focusing in on certain categories on a rotating basis. For example, if you look at our builder list, about 40% are referees, but they just aren't getting the kind of recognition as they're up against all of these other individuals. It's hard to compare the resume of a Robert Kraft with an Esse Baharmast. 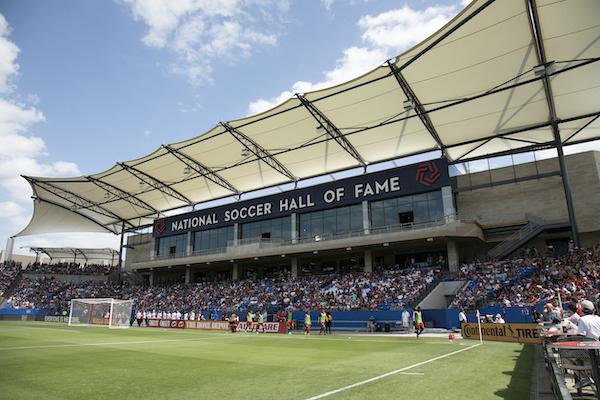 SA: What effect has the pandemic had on the NSHOF museum?

DJORN BUCHHOLZ: We closed in mid-March and we opened back up on June 10 with certain protocols laid out by the state, such as 50% capacity, masks and an on-site sanitation roamer. We're encouraging people to buy their tickets online. We're pretty digital inside, so we've redesigned a couple of our audio visuals so that they are intuitively social distancing. I think we've done a pretty good job and people have felt safe inside the building.

SA: I imagine your missing attendance from visitors who are in area for events like FC Dallas games and youth tournaments?

DJORN BUCHHOLZ: Yes, a decent amount. We see a lot of visiting team fans on the morning of game days, so that's certainly been a hit. Typically, if the game is at 7 o'clock on a Saturday, we're open normal hours until two and a half hours before kickoff, and then we'd shut it down because it becomes a private space for season-ticket holders. We're based on a complex with 17 soccer fields so any time there's a youth tournament we do pretty good, which we've been missing. And private events of people booking the Hall of Fame for weddings or corporate luncheons, they've taken a nose dive as well.

SA: What's the format for this year's induction ceremony?

DJORN BUCHHOLZ: On May 22, the plan is to do the induction ceremony, which will be both the 2021 or 2020 class, because we didn't have chance to induct Carlos [Bocanegra] [canceled because of COVID], with probably a luncheon-type format. Early evening, FC Dallas is planning on a home match. Anybody who has a ticket to the FC Dallas match can stick around for a Willie Nelson concert right afterward.