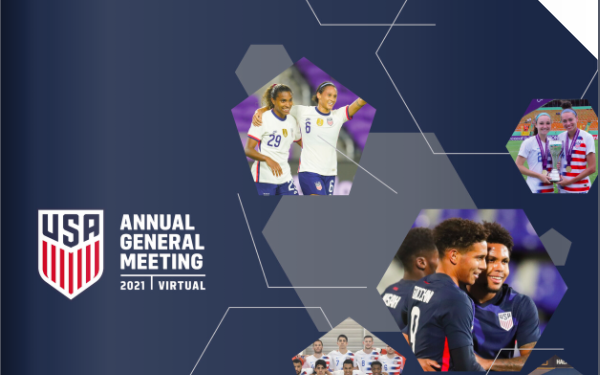 The Book of Reports contains reports from federation officers and committees, membership applications and the status of by-law amendments.

In 2021, the Book of Reports provides the first public report on the state of the federation's finances in the aftermath of the COVID-19 pandemic, which has shut down almost all its activities so far in fiscal year 2021 (which ends on March 31). In the three public sessions of its virtual meetings held in June, September and December 2020, the federation's board of directors was presented no updates on the current year's financial picture. They were only presented in executive sessions.

The picture, as presented in the Financial Summaries and Proposed FY2022 Budget, isn't pretty:

The losses came despite the decision, made very early in the pandemic, to shut down the Development Academy and lay off about 50 staff members.

Why were U.S. Soccer losses so high despite the cost-cutting? Revenues dropped from $105.2 million (budgeted) to $48.2 million (projected), a drop of more than 54 percent.

As Will Wilson, U.S. Soccer's new CEO, said in his report, many of the federation's revenue streams were "disrupted" in 2020 and will continue to be "strained" in 2021.

-- Commercial and sponsorship revenue (contracts with SUM and Nike), down $19.8 million, from $54 million to $34.2 million.
-- Revenues from national team games, international games and U.S. Open Cup games, down from $29.4 million to zero.
-- Registration and membership fees, the fees national organizations and leagues pass along to U.S. Soccer, down almost 50 percent, from $6.1 million to $3.1 million.

On the expense, the lack of senior national team activity -- just three men's games and one women's game in the calendar year after the pandemic shutdown -- cut expenses by $17.9 million.

The decision to eliminate the Development Academy represented a line-item savings of $9 million, part of a $15.6 million savings on sport development. Other than the U-23 men in Bradenton during January, no U.S. youth national team has gathered since March, contributing $4.7 million of the $7.3 million savings in sport performance.

That record now looks to be shattered in the aftermath of the COVID-19 pandemic.

FY2022 picture. The overall picture in the next fiscal year, which starts April 1, isn't much better.

The federation projects the capacity for national team games it controls to increase from 25 percent to 75 percent during the course of the year. But the increase in commercial and sponsorship revenues of $28.7 million is offset by an increase of $27.4 million in senior national team expenses. (The men are expected to play 24 games, including all 14 World Cup qualifiers, while the women are slated to play in the Tokyo Olympics in FY2022.)

By-law amendments. The Book of Reports includes 11 proposed by-law amendments. U.S. Soccer's membership must approve a change in its voting structure to comply with the new federal law -- Empowering Olympic, Paralympic and Amateur Athletes Act of 2020 -- which increased athletes' representation in national governing bodies from 20 percent to 33.3 percent.

The amendment recommended by the board of directors by a vote of 11-3 calls for the board of directors to increase from 15 to 18 voting members with the increase of athlete members from three to six to meet the one-third threshold. It also proposes that the voting structure of the National Council be changed to increase the Athletes Council's representation to one-third and Athletes Council's representation on all committees be increased to one-third. Currently, most committees consist of five members, one from each of the five councils.

(Another proposal, from the Indiana Soccer Association, calls for the board be reduced to 12 members: president, vice president, four athletes, two independent directors, one Adult, one Youth and a new at-large member -- a change that would eliminate the two Pro members, third independent director and second Adult and Youth members. Not surprisingly, the board was unanimous in not recommending this amendment.)

In a letter to the federation's membership, U.S. Soccer president Cindy Parlow Cone said she would like the by-law amendments on athlete representation be tabled so membership can have more time to study the issue.

The increase in the Athletes Council's voting share on the National Council from 20 percent to 33.3 percent will force a decrease in the voting share of the other three large councils -- Youth, Adult and Pro -- from about 25 percent to about 20 percent, making the Athletes Council the dominant council controlling voting matters. (The remainder of the vote consists on those controlled by members of the smaller At-Large Council and individual members, such as board of directors, life members and past presidents.)